Alonso won alongside Sebastien Buemi and Kazuki Nakajima in the #8 TS050 HYBRID, which beat the sister #7 car to victory by one lap.

The McLaren F1 driver, who is contesting the World Endurance Championship superseason with Toyota, led the race on Saturday afternoon and then helped haul the car - which had been two minutes down on the #7 - back into contention after completing a quadruple stint in the night.

When asked about the impact all six drivers had on the result, Leupen told Autosport: "Without all six this wouldn't have been possible. Considering the fact he's a rookie, Fernando was exceptional. Especially at night.

"Seb and Kazuki are two guys you can count on as well, they're great for the whole team.

"That's what makes the sport so beautiful, that you've got someone who's joining the team with a huge amount of talent who's capable of things like that and integrates into the team. That's what you dream of."

Nine-time Le Mans winner Tom Kristensen has tipped Alonso to claim the WEC title then return to the Indy 500 in his bid to complete the triple crown.

"Alonso has come and conquered Le Mans, along with his team-mates, and not put one foot wrong as we've seen all through the race," said Kristensen.

"I think he also sees the chance to be world [endurance] champion, which means he will continue to drive until Le Mans next year - and I think he will do that.

"I would not predict that he stops in F1, but he'll definitely be back at the Indy 500. Maybe he'll do a full season."

'The minutes were hours' 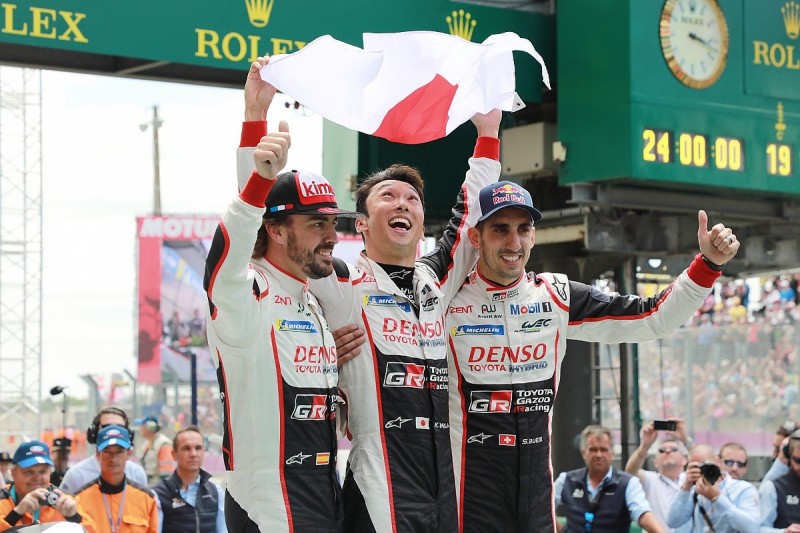 Nakajima, who was leading the 2016 race with two laps to go when his car lost power, said he was relieved to claim Toyota's first win.

"We had a bad experience before, in '14 and '16, so our mentality was really to be focused until the chequered flag, and we somehow managed it.

"It was really a great effort from all the team, including the #7 guys.

"I think we both deserved to win the race, we were pushing each other, so it was great for the team.

"Seb did an amazing job, and Fernando in the night, he was really amazing, so I'm really happy to drive the car with the two of them."

Buemi added: "I can't really describe it. When you look at the past, 2016 on the last lap [when the car failed], and Kazuki was going to be in the car for the last few laps.

"[There was] lots of emotion, and when I saw the car crossing the line I could not believe it.

"I've never seen anything like that, the minutes were hours. It was so long.

"You keep remembering that on the last lap anything can happen, and until he crossed the line I couldn't believe it."