Toyota finally took its maiden victory at the Le Mans 24 Hours, with the #8 car of Fernando Alonso, Sebastien Buemi and Kazuki Nakajima leading a one-two for the manufacturer

Both TS050 HYBRIDS were locked in a private contest for the win, well clear of the privateer LMP1 entrants, for the majority of the race and traded positions regularly during the opening six hours of the race.

The #7 car of Kamui Kobayashi, Mike Conway and Jose Maria Lopez built a healthy lead during the seventh hour, which Toyota attributed to time lost by Buemi in the #8 in slow zones, and the gap between the two cars then ballooned in the next hour when the #8 was slapped with a 60-second stop/go penalty for speeding in a slow zone.

By that point the #7 was ahead by more than two minutes, but the #8 began to claw back time in the early hours of the morning when two-time Formula 1 world champion Alonso started his second stint in the car.

Alonso completed a quadruple stint - even asking Toyota if it wanted him to stay in the car for a further run - that started halfway through the 11th hour and ran until 4am, and at times was able to take five seconds per lap out of Lopez, before handing the car over to Nakajima, who got within a couple of seconds of the leader before Lopez handed over to Kobayashi.

The #7 was able to stabilise the gap over the next stint, but Nakajima then passed his countryman Kobayashi into Mulsanne Corner before the two-thirds distance.

Over the next couple of hours the #8 was able to slowly build its lead, but it became a clear favourite in the final quarter of the race when Buemi handed over to Alonso under a safety car while the #7 crew waited until the safety car period had ended to change drivers.

The #7 car's fate was sealed when Kobayashi missed his planned pitstop lap in the penultimate hour and cruised back around the majority of the lap to the pits, which put the crew a lap down.

Kobayashi then had to serve two separate 10-second stop/go penalties for exceeding the fuel allowance and completing too many laps in one stint.

That gave Nakajima a clear run to the finish in the #8, which completed 388 laps on its way to victory - the first for Toyota at Le Mans.

The #3 Rebellion-Gibson R-13 of Thomas Laurent, Mathias Beche and Gustavo Menezes completed the podium as the leading privateer, ending up 12 laps behind the leader.

The car, which ran in third for 11 hours overnight, faced pressure from its sister #1 car in the final hours and was briefly overtaken but got back ahead when Neel Jani had to close the door of the #1 while out on track.

Jani was also given the same penalties as Kobayashi in the final hour.

SMP Racing's leading #17 BR1 held third for the majority of the first part of the race but was eliminated in the ninth hour when Matevos Isaakyan skated across the gravel exiting the double left-hander at the Porsche Curves and hit the barrier.

That ultimately forced Isaakyan to retire the car, despite three attempts to restart the #17 that led to a pair of slow zones being deployed.

Its sister #11 car was out of contention early on after it spent two hours in the pits, but was still running until the final hour when 2009 F1 world champion Jenson Button pulled off on the approach to Indianapolis with an engine failure.

That meant the #5 Manor-Ginetta was the only other LMP1 car to finish, 99 laps down and 42nd of 43 classified finishers. 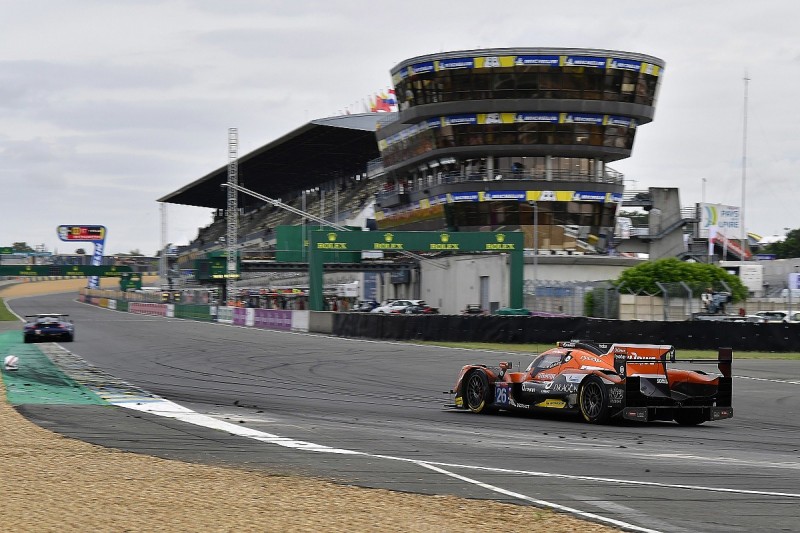 The #26 G-Drive Racing ORECA of Jean-Eric Vergne, Andrea Pizzitola and Romain Rusinov lived up to the billing of pre-race favourites in LMP2 and led virtually the whole race to give the TDS-run squad its first Le Mans victory.

It was also the first Le Mans win for all three drivers, who comprehensively dominated the opening World Endurance Championship round at Spa, and helped banish the memories of Rusinov's disastrous Le Mans crash last year, which culminated in a DNF and a three-minute penalty carried over to the next WEC round at the Nurburgring for avoidable contact.

After starting third, Vergne lost places at the start and ran sixth prior to the first round of pitstops in the opening hour, but he emerged in a led that the car kept for the rest of the race, marrying strong pace with no unscheduled pitstops or on-track incidents to take a two-lap lead over the chasing #36 Signatech-Alpine of Nicolas Lapierre, Andre Negrao and Pierre Thiriet.

The #36 crew was unable to match the #26 car when two-time event winner Lapierre was not at the wheel and was never in the victory fight after it fell off the lead lap in the 11th hour, but it enjoyed a largely clean run, although Thiriet blotted his copybook with a spin exiting a slow zone in the sixth hour.

Any number of cars could have finished third, but it was the unheralded #39 Graff-So24 Racing ORECA of Tristan Gommendy, Jonathan Hirschi and Vincent Capillaire that edged out the #28 TDS Racing ORECA of Loic Duval, Matthieu Vaxiviere and Francois Perrodo in the final reckoning.

Duval was 34 seconds ahead when he made his final pitstop on lap 358, but emerged 25s behind his compatriot and was unable to make up the deficit. The car ran second to its G-Drive stablemate in the early running, but lost too much time with gentleman driver Perrodo at the wheel and a gravelly moment for Vaxiviere in the 17th hour to be a factor.

That allowed Graff-So24 to take a surprise podium, despite serving a one minute stop/go penalty in the 14th hour for speeding in a slow zone.

Behind the #28 TDS car, the #32 United Autosports entry featuring Juan-Pablo Montoya finished best of the Ligiers in fifth after a series of late dramas befell the marque.

Montoya quipped he had "run out of talent" after he outbraked himself and nosed into the tyres at Indianapolis in the sixth hour, but was still on course for fourth place with Hugo de Sadeleer and Will Owen before a puncture in the penultimate hour dropped the car a lap behind the cars ahead.

Paul di Resta was running fourth in the sister #22 United Autosports Ligier with four hours to go when he crashed heavily at the Porsche curves and retired.

Another Ligier in podium contention, the Panis-Barthez Competition #23 of Will Stevens, Julien Canal and Timothe Buret lost an hour in the pits shortly after di Resta's crash and eventually finished 11th. 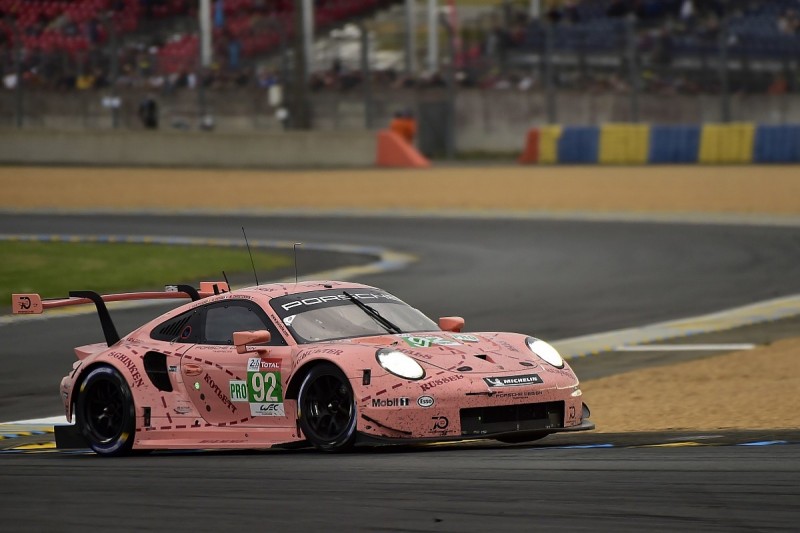 The early safety car broke up what had been an early three-way scrap for the lead, giving the 'Pink Pig'-themed #92 entry driven by Kevin Estre, Michael Christensen and Laurens Vanthoor an advantage of more than a minute over the #91 Rothmans-coloured Porsche and the best of the Fords, the #68 car.

From there, the #92 crew were never seriously threatened, and by the eight-hour mark they enjoyed a lead of more than two minutes which they were able to maintain over the remaining distance until a final hour splash-and-dash for Christensen.

The battle for second between the #91 Porsche and the #68 Ford heated up in the morning hours, as Sebastien Bourdais hit out at Frederic Makowiecki for what he felt was unacceptable driving during a thrilling scrap in the 21st hour.

But their battle was not to last as Makowiecki got away after the next round of stops, helping to secure second for himself, Gianmaria Bruni and Richard Lietz ahead of the Ford shared by Bourdais, Dirk Muller and Joey Hand.

Ford's leading WEC-entered car, the #67 of Harry Tincknell, Andy Priaulx and Tony Kanaan, was a further minute behind in fourth, while Corvette got its leading entry home, the #63 of Jan Magnussen, Antonio Garcia and Mike Rockenfeller, a lapped fifth.

BMW's pair of M8 GTEs both hit suspension troubles, with the #81 car finishing 11th after losing further time having to have its radiator changed. The sister #82 car retired when Alexander Sims crashed at the Porsche Curves in the early hours of the morning.

Also failing to finish were the #64 Corvette, which suffered engine trouble, and the #94 CORE autosport-run Porsche due to a terminal suspension problem. The #69 Ford also spent the final two hours of the race in the garage with an electrical issue. 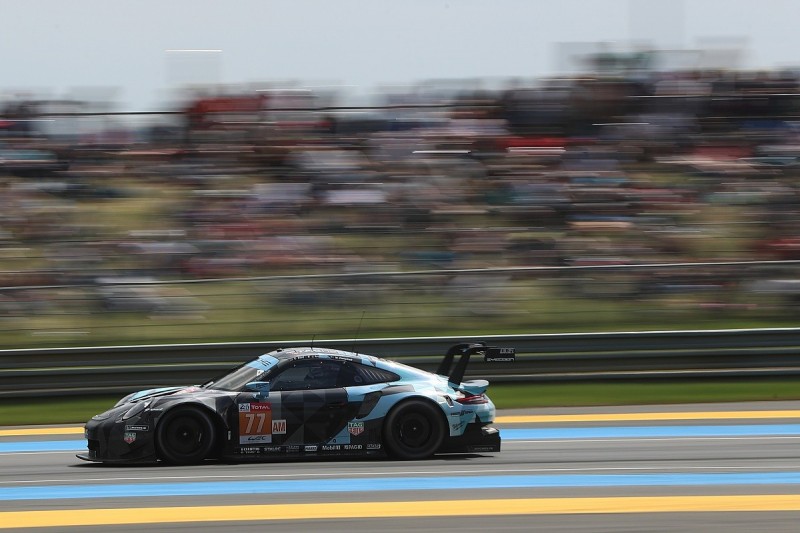 Honours in the GTE Am class went to the #77 Dempsey-Proton Porsche crew of Julien Andlauer, Christian Ried and Matt Campbell, by a little under two minutes over the #54 Spirit of Race Ferrari.

The #77 car assumed control of the class in the early hours, with Campbell and Andlauer able to build the team's lead over the course of Saturday evening and bronze-rated Ried keeping the gap to the chasing Ferraris relatively stable.

Leading the charge in the morning hours was the #85 Risi/Keating Ferrari, but any hopes of closing down the #77 Porsche ended when Ben Keating went off at Mulsanne corner in the 22nd hour.

That allowed the #54 Spirit of Race Ferrari driven by Giancarlo Fisichella, Thomas Flohr and Francesco Castellacci to snatch the runner-up spot, with Keating and team-mates Jeroen Bleekemolen and Luca Stolz securing the final place on the class podium.

Aston Martin's hopes of a class win ended when Paul Dalla Lana hit the barriers in the #98 Vantage shortly after one-third distance, while Dempsey-Proton's second car, the polesitting #88, was eliminated when Matteo Cairoli smacked the tyre wall at the Ford chicane in the morning hours.