Rob Huff, the 2012 World Touring Car champion, scored his second win of the '18 WTCR season in the reverse-grid race at Suzuka

Huff secured second on the grid behind the Campos Racing Cupra of Pepe Oriola having qualified ninth on Friday, but the Sebastien Loeb Racing Volkswagen driver snatched the lead up the inside at Turn 1.

A safety car period followed shortly after that as the Munnich Honda of Esteban Guerrieri - who had set an identical laptime in qualifying to Oriola but qualified 11th - was spat into the barriers through the esses.

Action resumed on the third lap of 10, but Huff was never put under any real pressure by Oriola and steadily began to build a two-second cushion.

The Briton crossed the line with 1.4s in hand over Oriola to take his first win since April's Hungaroring round. 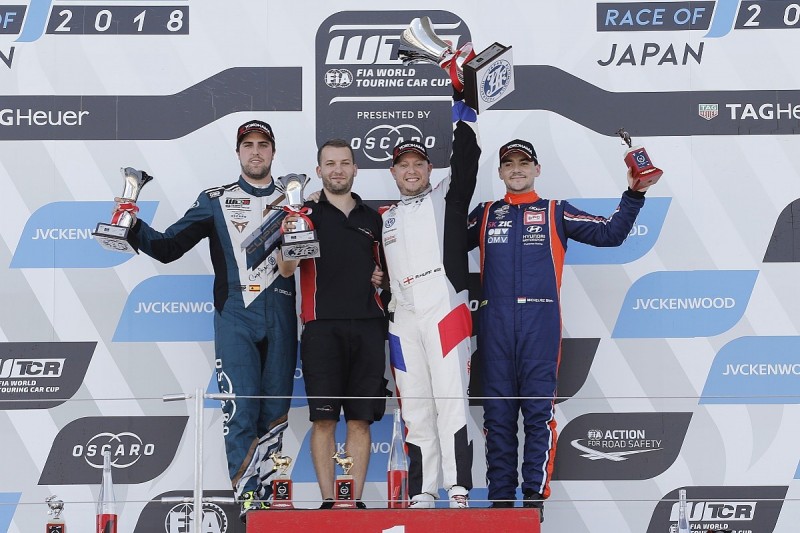 Oriola spent the latter half of the race defending from the BRC Racing Hyundai of Norbert Michelisz, who managed to dispense with Denis Dupont's Comtoyou Racing Audi shortly after the restart.

But Michelisz couldn't find a way past Oriola and had to be content with his first podium since his victory in Slovakia in July.

Dupont then found himself demoted by three more drivers, succumbing to Comtoyou team-mate Aurelien Panis, the second BRC Hyundai of Gabriele Tarquini and Kevin Ceccon's Team Mulsanne Alfa Romeo, and was then demoted outside the points by a post-race penalty for an out of position start.

Saturday race winner Ceccon was able to make three spots from his grid slot of ninth to finish sixth behind Panis and Tarquini, and ahead of race one poleman Aurelien Comte's DG Sport Peugeot.

Having drawn level with Tarquini at the head of the standings on Friday, Yvan Muller failed to make progress from 11th on the grid and only gained a point when Dupont's penalty was applied.

It means Tarquini is now nine points clear of Muller, with Thed Bjork now 27 points adrift in third after also finishing outside the points in 12th.

Tiago Monteiro's comeback weekend continued with a low-key run to 15th in the best of the Boutsen Ginion Hondas.