Ceccon crossed the line 2.9 seconds clear of Tarquini, but a five-second penalty for being out of position on the grid dropped the Team Mulsanne Alfa Romeo driver to third place.

From pole, race one winner Ceccon fell to fourth on the opening lap as the BRC Racing Hyundai of Tarquini seized the early initiative ahead of Yann Ehrlacher's Munnich Motorsport Honda and Aurelien Comte's DG Sport Peugeot.

Ceccon had recovered to second place and was stalking Tarquini when news emerged of his penalty, which prompted Tarquini to surrender his lead and stick to Ceccon's tail.

In the end the 56-year-old did enough to take his fifth win of 2018 by 1.9s from Comte, as Ehrlacher's podium challenge ended at mid-distance when his Honda slowed with apparent mechanical issues. 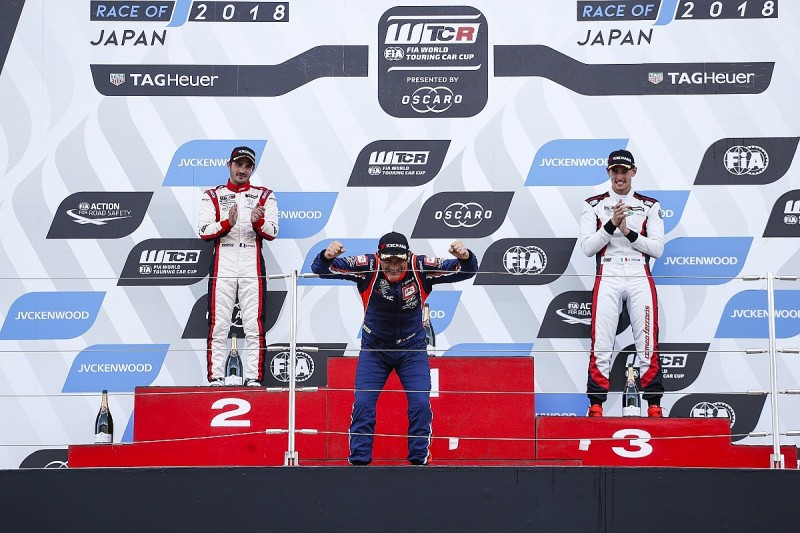 Further back, Mehdi Bennani made a stern pass on Aurelien Panis to grab fourth place on the last lap.

Bennani's team-mate Rob Huff - the reversed-grid race winner earlier in the day - emerged with sixth place a further 10s behind in a chaotic final couple of laps.

Esteban Guerrieri had a long train of cars formed behind, with title contender Yvan Muller, Pepe Oriola and Huff his main pursuers.

Oriola became the first to clear Guerrieri on lap eight of 11. Then on the following lap Guerrieri was tapped into a lurid slide by Muller at 130R, causing the pack to bunch up into the final chicane and Muller to hit the tyre stack.

Muller was forced to pull up with damage, gifting Tarquini a comfortable 39-point lead in the standings heading to the Macau season finale next month.

Oriola would have finished sixth but was penalised for repeatedly cutting the final chicane, gifting the position to Huff.

Benefiting from the chaos to move up into the remaining points positions were Frederic Vervisch, Thed Bjork, Norbert Michelisz and Jean-Karl Vernay.

Tiago Monteiro moved up to 11th, missing out on the final point by just two tenths as he returned to racing following his 2017 injury.