Kevin Ceccon delivered Alfa Romeo its first race victory in the World Touring Car Cup, after passing Aurelien Comte to win the opening race of the weekend at Suzuka

Ex-GP2 racer Ceccon survived two safety car restarts on route to victory in his Team Mulsanne-run Giulietta, having picked off DG Sport Peugeot driver Comte at the exit of the circuit's famous high-speed 130R corner on the second lap.

The first of the safety car was called when a tyre stack ended up in the middle of the track at the final chicane on the third lap. It came as the result of a wheel-to-wheel duel between Gordon Shedden and Thed Bjork that ended in terminal damage for the latter - wiping out a lead of one second for Ceccon.

Action resumed on lap six, but two laps later the safety car was deployed again when Yann Erhlacher's Munnich Motorsport Honda ended up in the gravel on the outside at 130R.

What was initially scheduled to be a nine-lap race was extended to 11, as a result. 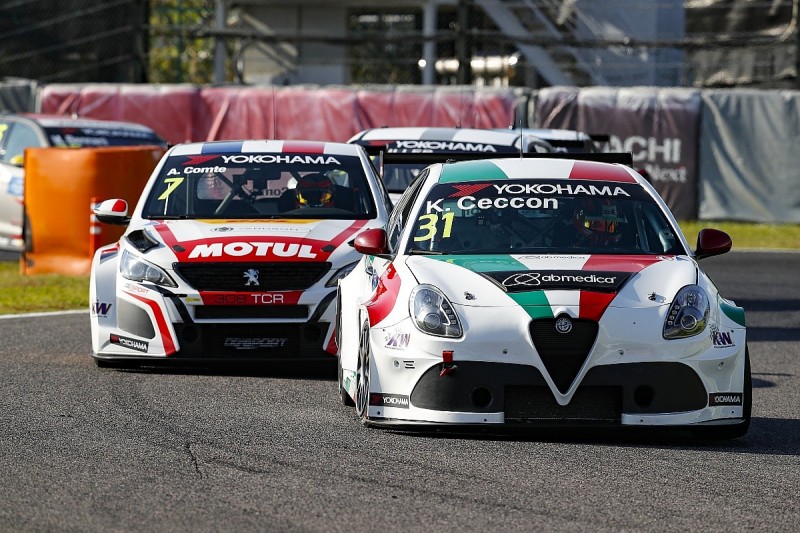 Comte ran Ceccon close on the final restart at the start of lap 10, but he soon had to switch his attentions to defending from Yvan Muller's YMR Hyundai i30.

Muller could not find a way by Comte in the remaining two laps, however, and was forced to settle for third - drawing him level at the top of the points table with fellow Hyundai driver Gabriele Tarquini.

Munnich Honda's Esteban Guerrieri made up two grid spots from sixth in the early laps, and held fourth to the flag. He had relegated Mehdi Bennani's Sebastien Loeb Racing Volkswagen and the WRT Audi of Jean-Karl Vernay in the process.

Both Muller and Tarquini are now on 251 points with five races to go, but Bjork falls 17 behind as a result of his failure to score.

Tiago Monteiro completed his comeback race in 15th, two places higher than he started in his Boutsen Honda.