World Rally Championship points leader Ott Tanak established an early lead on the Tour of Corsica, but is only 1.3 seconds ahead of Elfyn Evans.

Tanak wasn't particularly happy with his driving on the opening stage but responded by taking the lead on stage two courtesy of a second fastest time through the test.

He then took his first stage win of the rally to conclude the morning at the head of the pack in his Toyota, while his main title rival Sebastien Ogier is down the order after a tough start for pre-rally favourite Citroen.

M-Sport driver Evans was the quickest man on the opening stage by almost three seconds but dropped behind Tanak's Toyota on stage two.

Evans lost a further 0.7s on stage three but heads to the midday tyre-fitting zone in a confident mood, admitting he wasn't surprised by his strong pace.

Thierry Neuville was frustrated with the handling of his Hyundai i20, but lies third overall after a consistent morning and is just 3.5s behind the rally leader.

Neuville is embroiled in a close battle with team-mate Dani Sordo for the final podium place, holding a 4.1s advantage over the Spaniard in fourth.

Teemu Suninen, who is under instruction from M-Sport to finish the rally after his string of crashes in the opening rounds is fifth overall ahead of compatriot Jari-Matti Latvala, who was frustrated with his pace-notes that were "too slow" for the Corsican stages.

The two Citroen drivers were expected to be the pacesetters in Corsica, but both Rally Mexico winner Ogier and team-mate Esapekka Lappi suffered spins throughout the morning. 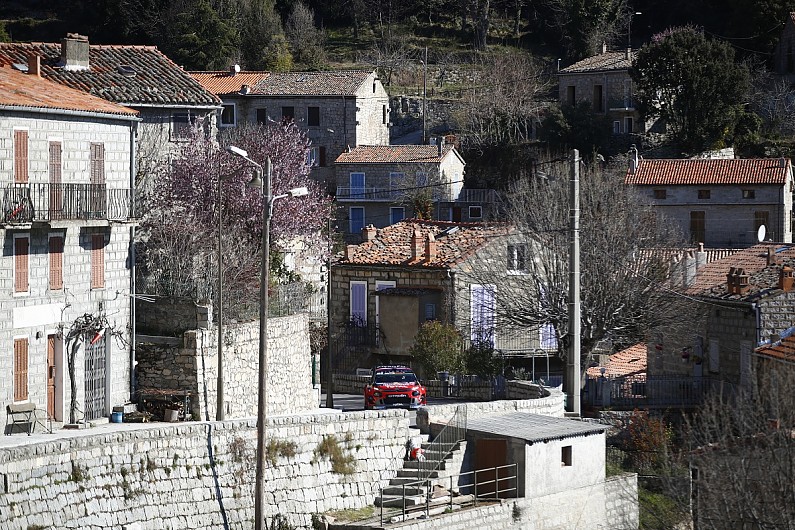 Lappi was fifth heading into stage three but has fallen to seventh, spinning his C3 on the exit of a hairpin halfway through the third test.

Ogier made a similar mistake on the morning's opening stage. The defending champion struggled for pace thereafter, not happy with the set-up in his Citroen C3, and finds himself 24s behind the rally leader and one second behind his team-mate in eighth.

Kris Meeke is down in ninth after a puncture on the opening stage, though he was fastest on stage two and just 0.5s shy of team-mate Tanak on stage three.

The British driver made a mistake on the recce and had a "keep in" instruction in his pace notes, but the fast left hander bit back and punctured the front-left tyre of his Yaris.

The returning Sebastien Loeb was another to suffer drama on stage one, dropping a shade under two minutes having broken a steering arm on his Hyundai i20.

Loeb crawled through the stage after sliding wide on a left hander and damaging the right-rear corner, and carried out urgent repairs immediately after the finish. The nine-time champion had dropped to 49th place but has recovered to 15th.

WRC2 leader Eric Camilli is 10th overall on his second rally in a Volkswagen Polo R5.