But third place for Tanak would be enough for him to claim his first WRC title, provided he either beats or is just one place behind Neuville on the powerstage later on Sunday afternoon.

Despite holding a secure 21.5-second lead, Neuville came out the blocks with a fastest stage time on Riudecanyes, stretching his lead by a further 0.7s over Sordo in second. Sordo was 0.4s quicker than Tanak through the test as his gap over the Toyota grew to 3.5s.

On the La Mussara powerstage dress rehearsal Tanak was strong but Sordo was even stronger. He eked another second clear to hold Tanak to a 4.5s deficit.

Neuville's lead stands at 17.5s with two stages remaining as he opted to back off with brake fade.

Loeb remains fourth for Hyundai but has lost touch with the podium places. He lost 7.5s to Tanak on Riudecanyes as he struggled to find confidence in the i2 Coupe WRC. 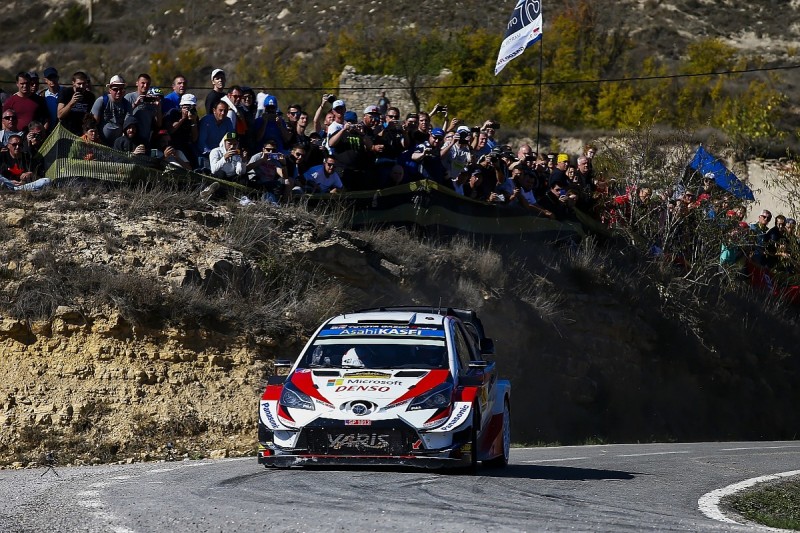 He then lost a further 11.6s on La Mussara to lie 19.7s adrift overall, and is in danger of falling into the clutches of Toyota's Jari-Matti Latvala who is now just 10.1s behind.

Elfyn Evans broke further clear of his M-Sport team-mate Teemu Suninen across Sunday morning's two stages and nicked some time from Latvala ahead too.

But Latvala's buffer is still secure as the Toyota driver "took it a bit easier" on Sunday morning to protect his fifth place by 21.3s.

Suninen was consistently around three seconds slower than Sebastien Ogier across Saturday's stages, and the trend continued on Sunday morning with Suninen exactly three seconds off Ogier's pace on Riudecanyes.

But a strong time on La Mussara spurred by "hating being Seb plus three seconds" bucked the trend as he went five seconds quicker.

Ogier remains in eighth overall, one place behind Suninen, on a day where his six-year reign as world champion looks set to come to an end. But due to his hydraulic issues on Friday, the gap between the pair stands at 2m47.4s.

The leading WRC2 runners occupy ninth and 10th places. Mads Ostberg heads the WRC2 Pro category in ninth but had been under pressure from recently crowned champion Kalle Rovanpera.

Rovanpera took over 30s from Ostberg on five of Saturday's six stages only to lose 40s and position to team-mate Jan Kopecky on the short Salou stage with broken suspension. Eric Camilli heads the WRC2 class and is 10th in a Citroen C3 R5.

Kris Meeke restarted on Sunday following his crash into an armco barrier on Saturday morning.

Esapekka Lappi, whose Citroen ground to a halt on Friday's final test, missed a second day of action with an engine related issue denying him the opportunity to compete.