The expected move from the British manufacturer ahead of the Silverstone WEC event on August 19 follows its previous practice of slimming down its driver line-ups after the Le Mans 24 Hours.

Nicki Thiim and Marco Sorensen will drive the #95 second-generation Vantage GTE as a duo, while Maxime Martin and Alex Lynn will do likewise in the #97 at Silverstone and then Fuji and Shanghai in October and November respectively.

"Each driver will benefit from increased track time and fewer compromises in their driving positions in a move that has become standard practice in the GTE Pro category," read a statement from Aston.

Marque stalwart Darren Turner, who drove with Thiim and Sorensen in the opening 2018/19 WEC superseaon rounds at Spa and Le Mans, has signed a new long-term contract with Aston.

The 44-year-old will take a new role that "includes additional development responsibilities with road and racing programmes and brand ambassador duties," according to Aston's statement.

Turner, who has been part of the Aston driver roster since its return to sportscar racing in 2005, will be back in the #95 line-up for the '19 rounds of the WEC superseason at Sebring, Spa and Le Mans.

Jonny Adam, who shared with Martin and Lynn at Spa and Le Mans earlier this year, will move over to the TF Sport GTE Am class Aston entry.

He joins Charlie Eastwood and Salih Yoluc as the professional in the line-up aboard TF's first-generation Vantage GTE in place of Euan Hankey for the remaining WEC races this year.

AMR team principal Paul Howarth said that Adam remained "a vital part of our line-up" and that the drive at TF would keep him "race sharp at world level".

John Gaw, managing director of AMR, said that the he expected "to see additional performance from the Aston Martin Vantage GTE at Silverstone, after a period of analysis and development post-Le Mans".

The team continued its development of the new for 2018 Vantage at Silverstone last month during a test organised by GTE Pro rival Ford.

The Vantage proved uncompetitive at Spa and Le Mans amid complaints from AMR that the new car was being held back by the starting Balance of Performance given to the new car. 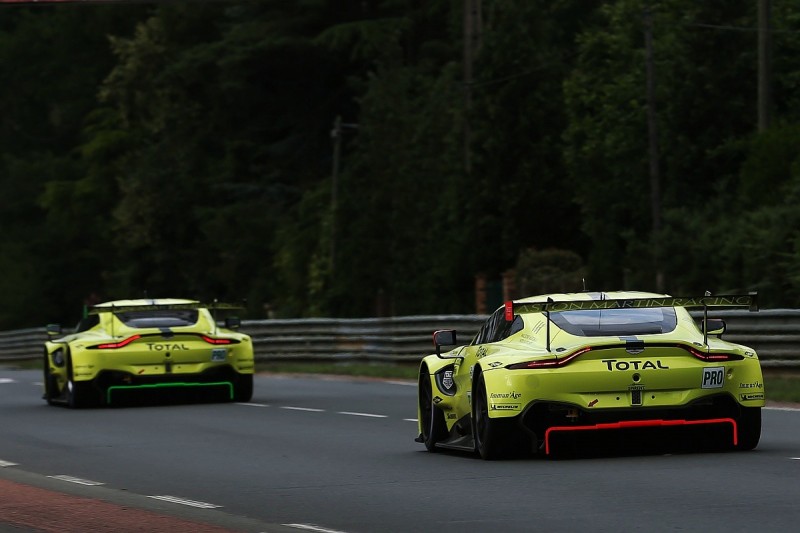