Ganassi driver Dixon qualified 1.6 seconds off the pace in fifth behind an all-Penske top four.

But on race day he worked his way forward before passing Josef Newgarden for the lead on the outside at a restart and then held off the Penske driver to the flag.

Dixon believes the Penske Dallara-Chevrolets were struggling to make fuel mileage targets, which helped him overcome the fact that the Honda aerokit creates more drag.

"I didn't really think we would be in this situation, but huge credit to Honda," said Dixon.

"The engine's very strong. They don't really have to turn it down for the race.

"To get the fuel mileage is always very difficult when you're making so much power.

"[The Chevrolets] were able to turn up to similar performance, I think, when they need to earlier in the race but we don't have to detune as much as they do.

"At the start of the race, I was kind of shocked how fast we were.

"I had a pretty big run on Will [Power] a couple of times, then Helio [Castroneves].

"Honda have done a fantastic job to maintain that performance.

"[The Penske drivers] were, I think, having to save fuel pretty hard to get the mileage number with their engine.

"They couldn't run flat-out like we could in some of the scenarios." 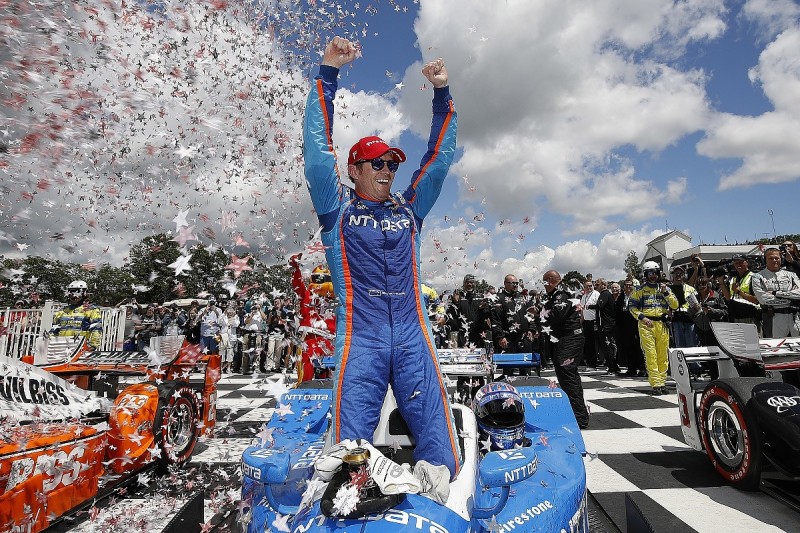 Dixon also believes the Honda engine was crucial in his pass of Newgarden following a restart, where push-to-pass boost is not allowed.

"What contributed to that was the torque of the engine," Dixon said.

"In these lower gears out of the last corner that enabled us to get close to Josef, get in the draft, get beside him."

The win came despite a fuel pump problem ruling Dixon out of the morning warm-up.

"We had some issues [after qualifying] with a couple of pieces in the fuel cell and we tried to repair those," he explained.

"Then for a different reason [on Sunday morning] we just couldn't get fuel pressure.

"The difficult part was that you can't replicate it inside the pits. It was third, fourth or fifth gear where it was causing the starvation.

"We were trying to run the car at high rpm while dragging the brakes in the pits before the race to try to rectify the issue.

"It wasn't until the warm-up lap we could really figure out they fixed the issue."