Kanaan hit the wall hard at the fast kink on the Elkhart Lake track's back section with nine laps of Sunday's race to go.

He had been rapidly closing on Rossi, who had a front wing problem, but tagged the Andretti Autosport Dallara-Honda's right-rear bumper pod and broke his own front wing as he moved to pass on the exit of the Carousel corner.

Lacking front downforce, Kanaan's Ganassi car ploughed into the concrete wall. "[Rossi] blocked me and put me in the wall," said Kanaan.

"I don't think it was a nice move at all, but I'm not going to waste my time with it.

"My wrist is a little sore, but I'm OK overall.

Rossi, who spun into the wall at the previous race at Texas Motor Speedway after a clash with Kanaan, disagreed completely.

"I had a broken front wing and I was going through the Carousel in third gear, where I'm normally in fifth.

"I thought about defending - you saw my Push to Pass light come on and I moved maybe half a car width off the white line on the exit of the Carousel, but there were still two to two-and-a-half to three car widths to the inside.

"And he just clipped my wheelpod as he popped out to pass.

"Obviously I'm happy he's alright because that was a big hit there, but I don't take any responsibility for it." 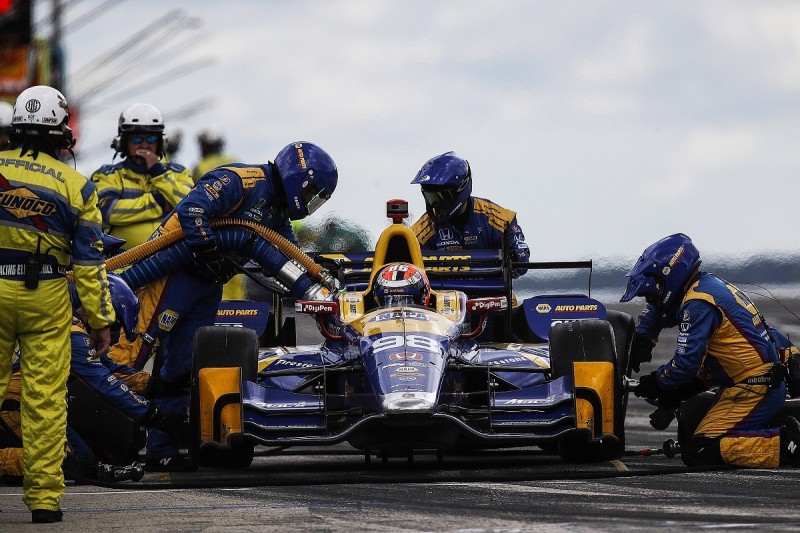 He had started only 15th after engine problems in qualifying, and was trying to make progress on a four-stop strategy before his own wing breakage - which occurred for a second straight year at Road America - cost him pace.

"On my out-lap after my final stop, an upper front flap failed, and from looking at it, it seems a bolt just broke," Rossi explained.

"It wasn't from being hit or from me hitting anything; it just failed.

"To have a front wing break here for two straight years is just crazy."