IndyCar has confirmed Juan Pablo Montoya and Oriol Servia as its 2018 universal aerokit test drivers, as predicted by Autosport, with Team Penske and Schmidt Peterson Motorsports running the programme

Testing of the universal kit begins on July 25-26 at Indianapolis Motor Speedway, while subsequent tests will take place August 1 at Mid-Ohio, August 10 at Iowa and September 26 at Sebring.

A test car will be provided for each manufacturer, with Penske running the Chevrolet example for Montoya and Servia driving the Schmidt Peterson-run Honda Dallara.

While the teams are providing crews to service the cars, the testing will be supervised by IndyCar.

The series will maintain control of the test chassis and data so neither team involved gets an advantage for next season.

Both Servia and Montoya have contested partial IndyCar seasons this year, with Rahal Letterman Lanigan and Penske respectively.

"If we can help in any small measure to have a great product in 2018, I'll be honoured," Servia said.

"It's great that IndyCar is doing it to make sure we have good racing.

"We want to help them accomplish what they want to accomplish." 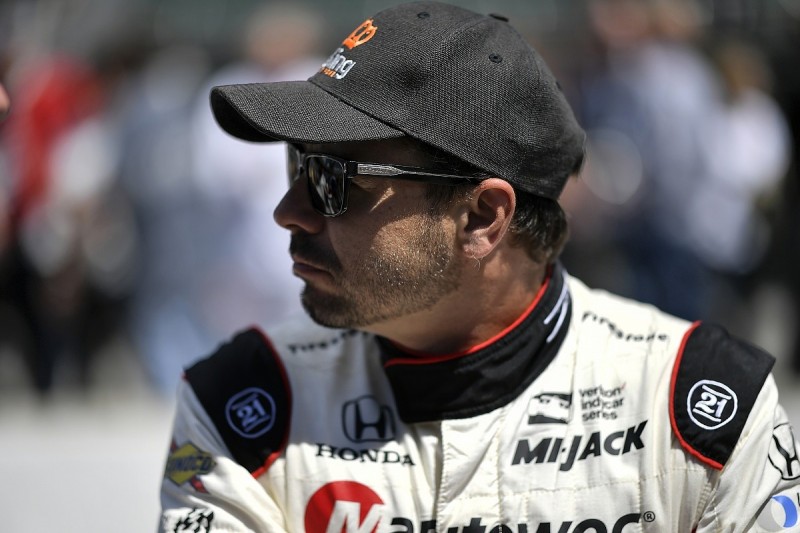 Montoya, two-time Indy 500 winner and 1999 CART champion, added: "I think going back to one aerokit for both manufacturers is good for the sport.

"It opens the door to other companies to get interested in IndyCar again."

The universal kit will create more downforce from the underbody and less from the top surfaces, and feature revised weight redistribution.

"The new car will have more weight on the front," said Tino Belli, IndyCar's director of aerodynamic development.

"We've removed the [rear] wheelguards and the beam wing, which obviously is quite a bit of weight far back on the car.

"We've introduced side-impact structures beside the driver and moved the radiators forward a bit.

"We're anticipating having about 1.6% more weight on the front axle, so that could require a small amount of front downforce."

Belli described the four IndyCar-run tests as sign-off exercises before finetuning is done by the teams when they get the aerokits for themselves.

"Once we're sure the car is in the right window, we'll move on to reliability testing," Belli said.

"We'll put the car back to a race-level of downforce, fill it up with fuel and check that we don't have issues with the exhaust heating the bodywork too much and establish the cooling levels for each engine.

"We're not really trying to go a certain speed and we're not trying to check how the car handles in traffic.

"Those things won't be established until we're able to work 'in anger' next year, but we just want to make sure that we haven't missed on our aero targets specifically."