Pagenaud was the second driver during qualifying to set a fastest-ever lap of the track, in a time of 58.9124 seconds, as he beat Graham Rahal by 0.3121s.

Will Power had initially set a 59.3910s for provisional pole before Pagenaud took control.

Pagenaud's title-winning 2016 campaign had included seven poles, but he has not started first since last season's finale.

The reigning champion's team-mates Helio Castroneves and Power finished qualifying third and fourth behind Rahal, with all three Penske drivers saving the softer red Firestone tyres by only using these in the final six minutes.

His fourth place means that Power has now qualified in the top five in each of the last 10 years in Toronto. 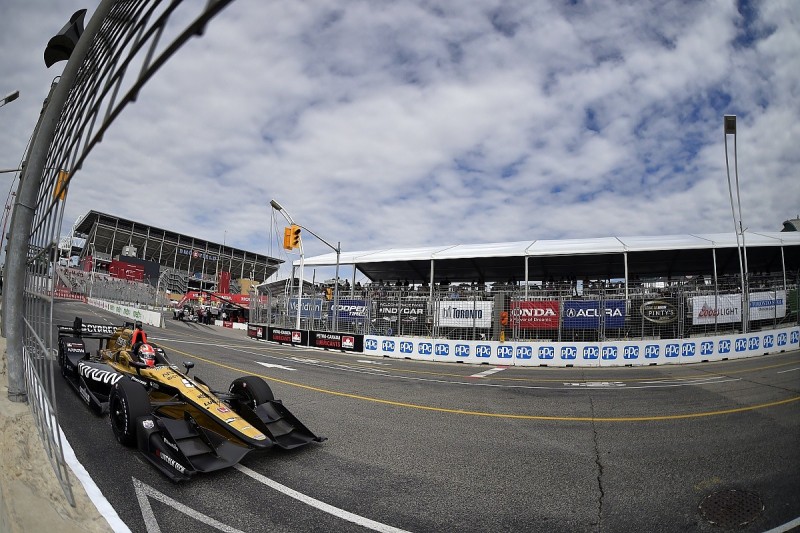 Josef Newgarden was the only Penske driver to miss out on the top six in seventh.

Alexander Rossi ended as the leading Andretti driver in eighth, ahead of Max Chilton.

Takuma Sato and Marco Andretti finished qualifying 10th and 11th, while JR Hildebrand was 12th after causing a red flag in the third stage.

The Ed Carpenter Racing driver damaged his front wing main-plane and left-front suspension against the wall at the tight Turn 8 right-hander before the final complex.

Tony Kanaan will begin the race in 14th while Ryan Hunter-Reay, who won the event in 2012, qualified only 16th.

Esteban Gutierrez destroyed the right-hand side of his car against the wall at the fast final corner at the end of the second round.

He was set to advance from his group before the incident, but will start last.