Power took the decisive lead on the 150th tour of the 243-lap race, swooping past Dixon.

But throughout the race, the field was caught in the dilemma of whether a three or four-stop race was quickest before a caution caused by Ryan Hunter-Reay on lap 172 forced teams into a fuel gamble.

Most drivers committed to a three-stop strategy were forced to abandon it as Hunter-Reay's incident came just too soon for a stop under the resultant yellow to be their last of the race.

Power made his final splash-and-dash stop inside the final 20 laps and cruised to a comfortable victory.

But the real battle for the title took place directly behind him as Dixon and Rossi diverged after the final caution.

Dixon followed Power in a flat-out approach, knowing a quick fuel stop late on would be needed.

Rossi opted to conserve fuel, dramatically curbing his speed and managing his fuel to the end.

Initially dropping from the podium places to seventh, Rossi managed to narrowly stay ahead of Dixon after the Chip Ganassi Racing driver stopped with 10 laps to go for a 2.8 second fuel top-up.

As those ahead stopped to take on fuel, Rossi cycled back to second ahead of Dixon.

The Andretti driver made up three points on Dixon's title lead, with the gap now 26 points with just Portland and the double-points finale at Sonoma to go.

Penske's Simon Pagenaud finished fourth ahead of Zach Veach, who climbed from 16th on the grid to fifth after his Andretti team-mates described him as the quickest driver in the outfit over the weekend.

The reigning IndyCar champion made a superb start to jump Rossi and run inside the top three, but was gradually shuffled back due to handling problems in the first stint.

Newgarden was first bumped back by Rossi in a fashion similar to his own controversial pass on Pagenaud last year, and then fell out of contention after he and Penske failed to make the fuel mileage work in the last stint.

He finished ahead of Ganassi's Ed Jones, who fought a thrilling battle with Veach inside the top five places before a late stop for fuel.

Rahal Letterman Lanigan Racing's Graham Rahal and Takuma Sato ran off-strategy for most of the race, running later than anyone through the opening stints.

The pair finished ninth and 10th respectively after the Hunter-Reay-induced caution forced them back onto the conventional strategy. 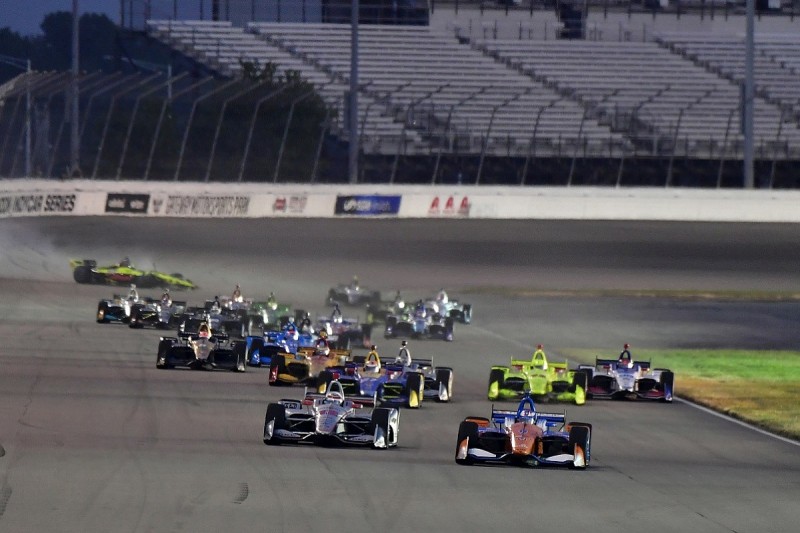 Sebastien Bourdais was the only other driver to a cause a caution, getting loose on the opening lap and clouting the outside wall.

James Hinchcliffe was 15th in Schmidt Peterson Motorsports' only car, with team-mate Robert Wickens's #6 machine displayed in the paddock as the field paid tribute to the seriously injured rookie throughout the weekend.