His qualifying speed was evident from the off with two early poles, and he regularly disrupted things for the top two teams in races. Ferrari still feels he needs to up his game on technical feedback and cut out the occasional qualifying error such as that Monaco Q3 crash.

PLUS: Why Ferrari is sure its long-term Leclerc investment will be vindicated

He felt Austin was a faultless weekend, but Silverstone and the way he fended off Hamilton for so long with an ailing engine was just remarkable. Don’t forget the no-stop win attempt in Turkey either.

Leclerc's near wins in 2021 for Ferrari

The best chance of a Ferrari victory – and also its most-painful near miss. The team was in the hunt thanks to the SF21’s prowess over bumps and kerbs with is compliant front end, with both drivers showing strong pace. Leclerc got the upper hand over Sainz with second in Q1 and leading Q2, and was ahead again after the opening Q3 runs after Max Verstappen lost momentum exiting the chicane.

Cooler temperatures meant harder warm-up laps were needed and there was little track evolution. But Leclerc pushed too hard after being unable to replicate his sector one pace and clipped the inside barrier at the Swimming Pool.

His crash prevented Verstappen and others going quicker, which meant he sealed pole at a track where overtaking his near-impossible. But Ferrari not spotting the broken left-rear driveshaft hub and Leclerc therefore being unable to take the start meant his record finishing record in his home city is now 0-5. 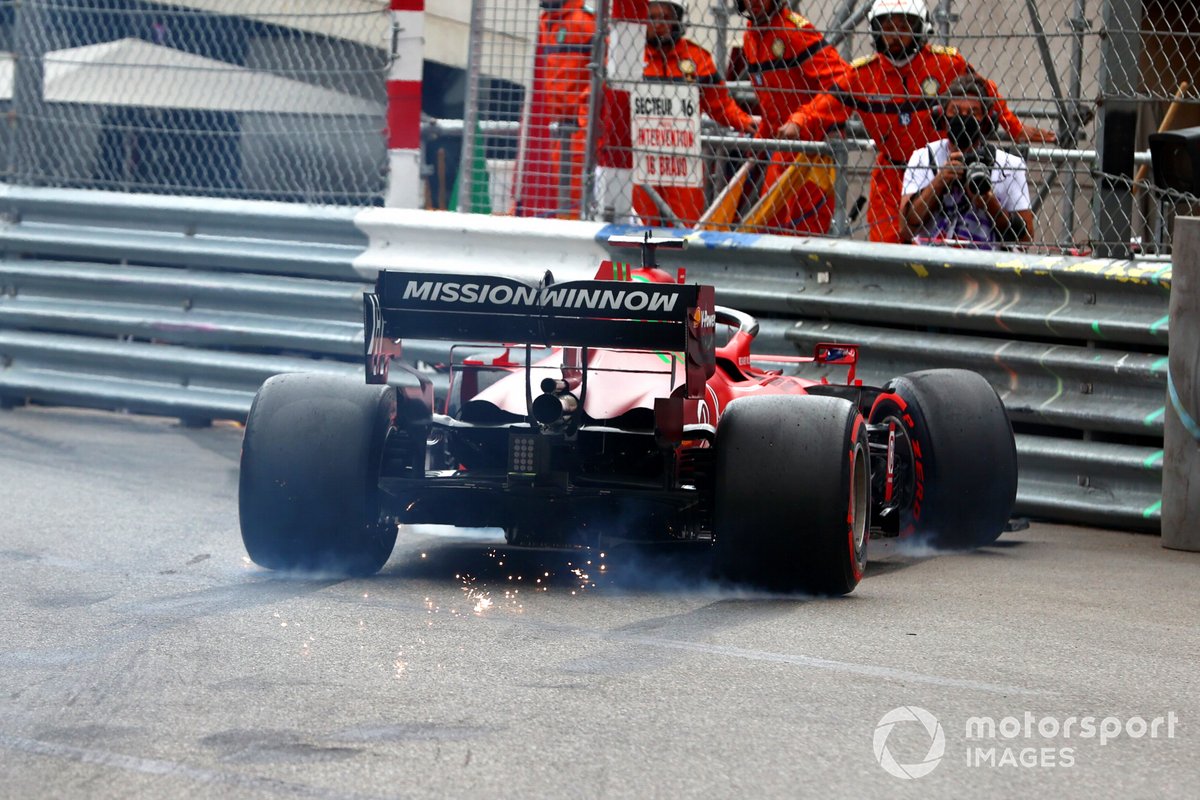 The closest Ferrari came to a win in 2021 at a circuit where Leclerc excels. He qualified fourth once Sergio Perez lost his best Q3 time and backed that up in a straightforward sprint race adrift of the leaders. When Valtteri Bottas made a wheel-spin heavy start, Leclerc shot ahead and capitalised on the controversy at Copse.

He aced the second start ahead of Lewis Hamilton’s repaired Mercedes, then kept it at bay on the mediums – displaying unexpectedly strong tyre management. He did this all through an engine mapping management system error meaning intermittent power cuts that he had to alleviate.

But his pace was worse than Hamilton’s once they switched to the hards and although he slipped wide at Copse, the Mercedes was always coming by.

The most-unlikely victory chance, but one that still showed Leclerc’s talents. He’d qualified an excellent fourth, but even more impressively had only fallen to 8s behind leaders Bottas and Verstappen during the course of the opening race stint in the wet on the tricky Istanbul surface.

Having cycled into the lead when they stopped, he asked Ferrari if an audacious no-stopper was on. They went for it, with Leclerc’s pace holding up until Bottas’s new inters went through the graining phase and he was simply unstoppable, as was Perez, who overcame Leclerc late-on to drop him off the podium in fourth.