Tarquini clinched his second victory of the season after a second safety-car period neutralised the end of the race, moving up to fourth in the drivers' standings as a result.

Michelisz, who lost out to Tarquini in the final race of the 2018 Hungaroring event after a slow start, again made a poor getaway from pole and slipped to third behind the Munnich Motorsport Honda Civic Type R of Guerrieri and BRC Racing stablemate Tarquini.

Guerrieri had shared the lead of the drivers' standings with team-mate Nestor Girolami before the start of the race.

He appeared to have the race under control in the early laps as he kept the Hyundais at bay.

But the Honda seemed to struggle to pick up the throttle exiting Turn 5 on lap five, with Tarquini pouncing off the corner and Michelisz also sneaking ahead on the approach to the Turn 6/7 chicane.

Things later went from bad to worse for Guerrieri, who went head on into the barrier on the outside of the final corner on lap 12 of the originally planned 15 - an incident that required the intervention of the safety car.

But any thoughts of a Michelisz fightback were quickly quashed when the Hungarian crossed the start/finish line 1.197 seconds behind his team-mate on the restart with three laps of the extended 17-lap distance to go.

A second safety car was called shortly after the restart when Kevin Ceccon (Team Mulsanne Alfa Romeo Giulietta) went off, and racing did not resume thereafter.

The victory was Tarquini's seventh since the start of the WTCR era in 2019.

Third-place starter Ehrlacher made a good getaway but lost out to Tarquini by virtue of hanging out on the wider line through the first corner, only to be promoted back to the final podium slot when Guerrieri went off. 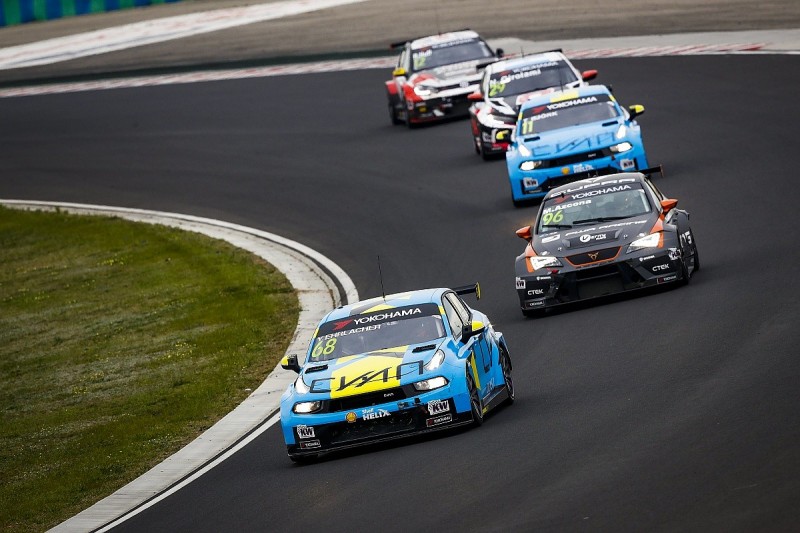 Mikel Azcona scored a second fourth-place finish in a row to cap an excellent weekend for Swedish Cupra squad PWR Racing, while Thed Bjork - Cyan's lead representative in the drivers' standings - was fifth.

Girolami moved into an outright lead of 10 points thanks to his sixth-place finish, with Rob Huff making another run into the top 10 in his Sebastien Loeb Racing Volkswagen Golf GTI and claiming seventh.

Aside from Guerrieri and Ceccon, Yvan Muller was the only other retiree.

The four-time World Touring Car champion had been given a drivethrough penalty for making contact with Cyan team-mate Andy Priaulx on the opening lap and, having dropped to last, returned to the garage after completing nine laps.