Ehrlacher had been hounding the BRC Hyundai of Augusto Farfus for fifth in a wild, rain-affected second race, but left enough room for Nicky Catsburg to get the nose of his car inside Ehrlacher's Lynk & Co 03 at the final corner.

That allowed Catsburg to pass Ehrlacher on the straight, and gave Tarquini an opportunity to follow Catsburg through at Turn 1.

Tarquini had the inside, but t-boned the right-hand side of Ehrlacher's car as he took the natural line out of the corner towards the exit kerb, which forced Ehrlacher to retire.

Speaking to Eurosport after the second race, Ehrlacher - who retired from Saturday's race after a hit at the same corner from Aurelien Panis's Cupra broke his left-rear suspension - said he had lost respect for Tarquini.

Asked to describe his race, Ehrlacher said: "The accident I had yesterday with Aurelien I can understand. But with a guy like Gabriele I am struggling to understand.

"I learned something, I had quite a lot of respect for this guy but I don't have anymore now.

"We are trying to make good races, you are just trying to save your place, and I was not even defending - I was just driving on the line and [he] just smashed into me, and I got hit maybe 100 times in this race.

"I'm starting to be fed up a little bit." 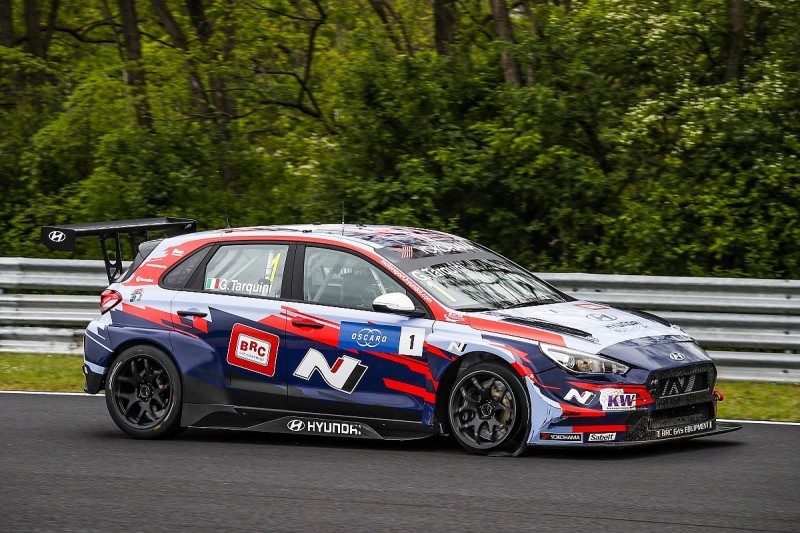 Tarquini failed to finish in the points after picking up a puncture while running seventh.

The Italian was summoned by race stewards over the collision with Ehrlacher and an incident with Esteban Guerrieri a lap earlier, and was awarded a five-place grid penalty that will be applied to the opening Slovakia Ring race next month.

Explaining his part in the incident, Tarquini said: "I was pushing my team-mate on the straight, because he slowed me down, because his exit was not fantastic.

"He was fighting with a Lynk & Co car, and I pushed him and he [Catsburg] can stay in front."

Cyan was able to repair Ehrlacher's car for the final race, which the Frenchman - the nephew of four-time World Touring Car champion Yvan Muller - finished on the podium.

Ehrlacher lost out to Tarquini's Hyundai at Turn 1 but was promoted back into third behind winner Tarquini and Norbert Michelisz when Guerrieri crashed with a steering-arm failure.

"It's our second podium together this year and I was really pleased about this - it's a kind of redemption after the last races we had," said Ehrlacher.

"It was quite a good race, a good start as well, I managed to get side-by-side with Norbi [polesitter Norbert Michelisz] and Esteban.

"Since the beginning of this weekend I was hit enough in T1, enough drivers smash into me in T1, so I was more careful and I lost the place and was down to P4."