While Girolami had a relatively simple run to victory after taking the lead towards the end of the opening lap, the calm race experienced by the first four finishers was in complete contrast to the action behind.

From sixth on the grid, Girolami had muscled his Honda Civic Type R into second place by the time the pack had reached the fast Turn 4 right-hander, and set about hunting down Haglof.

Girolami made it into the lead at the Turn 12 right-hander and quickly scampered clear from there, with Vernay outdragging Haglof for second on the run to the first corner at the start of the following lap to take back second place.

Saturday race winner Girolami held a healthy advantage for the remainder of the race and, while Vernay got within half a second of the Honda in the final laps, the Audi driver backed off on the final lap.

Girolami's second win of the weekend elevates him into a shared lead of the championship with team-mate Esteban Guerrieri, with Girolami ahead by virtue of having won two races to Guerrieri's one. 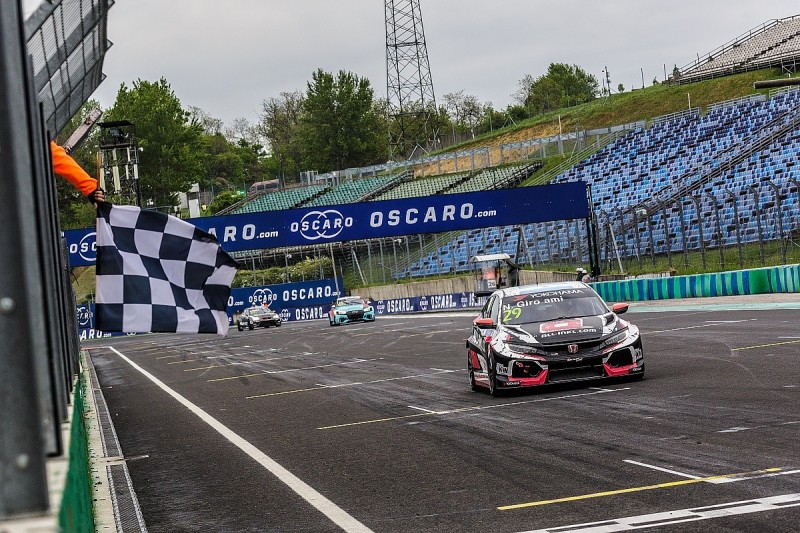 Behind Vernay, the final podium spot was claimed by 2019 WTCR newcomer Haglof who, along with team-mate Mikel Azcona, escaped from the chasing pack to seal a fine three-four finish for the Swedish PWR squad.

They had been allowed to break away from the pack in the opening stages while the BRC Racing Hyundai i30 N of Augusto Farfus attempted to fend off Yann Ehrlacher (Cyan Lynk & Co) at the head of a 10-car pack.

Farfus's roadblock also made those behind susceptible to attack and, having fought past Guerrieri, Nicky Catsburg (BRC Hyundai) also made a move on Ehrlacher to claim sixth.

Ehrlacher's Lynk & Co had earlier sustained right-hand sideskirt damage, but was forced to retire from the race when the third BRC Hyundai of Gabriele Tarquini tagged his side at the first corner, while attempting to follow Catsburg through.

Catsburg later went off at Turn 12, allowing Yvan Muller - who had started 15th in his Lynk & Co - Guerrieri and Tarquini back ahead of him.

Muller briefly got as high as fifth after passing Farfus, but was then passed by Guerrieri at Turn 2 - a move which ultimately decided fifth and sixth positions.

Rob Huff steered clear of most melees to claim seventh in his Sebastien Loeb Racing Volkswagen Golf GTI, although he was involved in an entertaining scrap with Hungarian teenager Attila Tassi - who finished on the Briton's tail in eighth.

Farfus survived the mayhem to finish ninth ahead of Catsburg, but BRC team-mates Tarquini and Norbert Michelisz - who is due to start the final race from pole - were less fortunate.

Tarquini suffered a puncture while running seventh and Michelisz was forced to the pits after a hit from Aurelien Panis (Comtoyou Cupra) while they squabbled over the minor points-paying positions.

Panis was 13th ahead of team-mate Tom Coronel, while Frederic Vervisch's run to the final point highlighted just how frenetic the race was, given he recovered to 15th despite serving a drivethrough penalty for jumping the start.