The opening loop of three stages began with a stage win for Ogier by 8.3 seconds, pushing his Toyota Yaris past Hyundai's overnight pacesetter Dani Sordo to the top of the leaderboard.

Sordo's priority is to defend Hyundai's slender seven-point lead in the manufacturers' championship, and he dug deep to take back five seconds on the next stage but could offer little resistance to Evans, who won the third stage of the day.

While the cars were serviced halfway through the day snow arrived in time for the first stage of the afternoon loop, which saw both M-Sport's Gus Greensmith and Hyundai's Ole Christian Veiby crash heavily at the same corner.

On the next stage, the 11th stage overall, disaster befell Evans when the points leader was left an unwilling passenger as his Yaris WRC careened off the road.

Evans and co-driver Scott Marshall leapt out and made sure to slow down the next man through - title rival Ogier - and to try to prevent any other runners from going off and damaging their stranded car.

"It's crazy, crazy conditions," Toyota team boss Tommi Makinen said. "There are no words. It's all that we want, to be champion. He handled it very well, all the time very well and he did an incredible drive. No question of that."

For his part, Evans was sanguine about potentially leaving the door open for Ogier in this year's title race, stating that he had been feeling comfortable and, if anything, not pushing hard enough early in the stages.

"You have to be there, you have to try, you're not going to win anything by sitting round at the back. I think everybody was having to take some sort of chance," he said.

"On my side, I'm really sorry for the team, to be honest, because from the manufacturers' side it was looking really good on Toyota Gazoo Racing's part with both of us moving up the order.

Another big loser on the stage was M-Sport's early leader Esapekka Lappi, who had elected to take three full snow tyres in his Fiesta but did not receive a message from his team to put them on the car.

"No one told us that it was snowing," growled the Finn. "Our information was that it's just wet so I didn't have my snow tyres on. There's no point [having the right tyres] if you don't put them on."

The following stage was then cancelled after a complete whiteout, which prompted the crews to return to the circuit at Monza for the final run of the day. This was won by Sordo, who closed up to 17.8s behind Ogier who leads ahead of the final day. 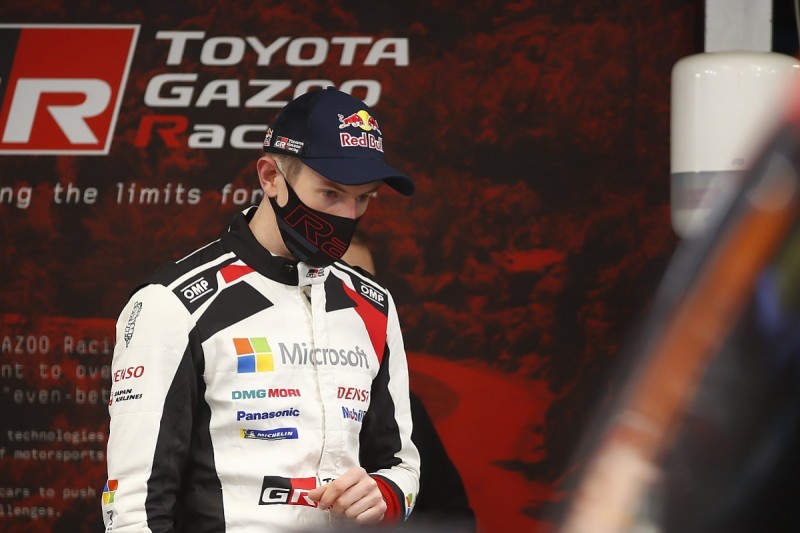 With outgoing WRC champion Ott Tanak holding third overnight for Hyundai, and the second surviving Toyota of Kalle Rovanpera almost a minute in arrears in fifth behind Lappi in fourth, Evans's retirement puts Hyundai in pole position to retain the WRC manufacturers' crown.

In the WRC2 title battle, the two contenders Mads Ostberg and Pontus Tidemand hold the top two positions after Adrien Fourmaux lost minutes to a spin and a puncture. With Tidemand having to drop his worst score, Ostberg must hold on to his 30.9s advantage to take the title.

The WRC3 leaderboard is dominated by the Skodas of guest stars Andreas Mikkelsen and Oliver Solberg, who hold sixth and seventh overall after high attrition among the senior WRC class.

Jari Huttunen, third place WRC3, currently has one hand on the category's crown after his nearest rivals, Kajetan Kajetanowicz and Marco Bulcacia Wilkinson, fell back with various struggles.

Three more stages remain on Sunday's schedule, all of which will be held within the confines of the Villa Reale circuit.

The final stage of the day will also see the points-scoring Power Stage for which both Hyundai's Thierry Neuville and Toyota's Elfyn Evans are expected to return and play a key role in deciding the outcome of the 2020 season.