Toyota's Elfyn Evans has taken the lead of Rally Portugal on a climactic penultimate day of the World Rally Championship’s first gravel event this season after leader Ott Tanak was forced to retire.

Overnight leader Tanak had begun to build a considerable advantage through Saturday’s stages, dominating the morning loop for Hyundai and continuing to stretch his advantage through the same stages in the afternoon.

Tanak set the fastest time on the second stage after the break, thereby claiming the 250th stage win of his career, which handed the 2019 world champion an overall lead of 22.4 seconds over Evans.

But on his second pass through the 37.92km Amarante stage, the Estonian broke the right rear suspension of his Hyundai i20 WRC and was forced to pull to the side of the road after attempting to three-wheel his way to the finish.

This drama put Evans in a strong position as the field headed to a day-ending superspecial on the streets of Porto, having gradually pulled out a lead of 16.7s over early leader Dani Sordo’s Hyundai in second place. 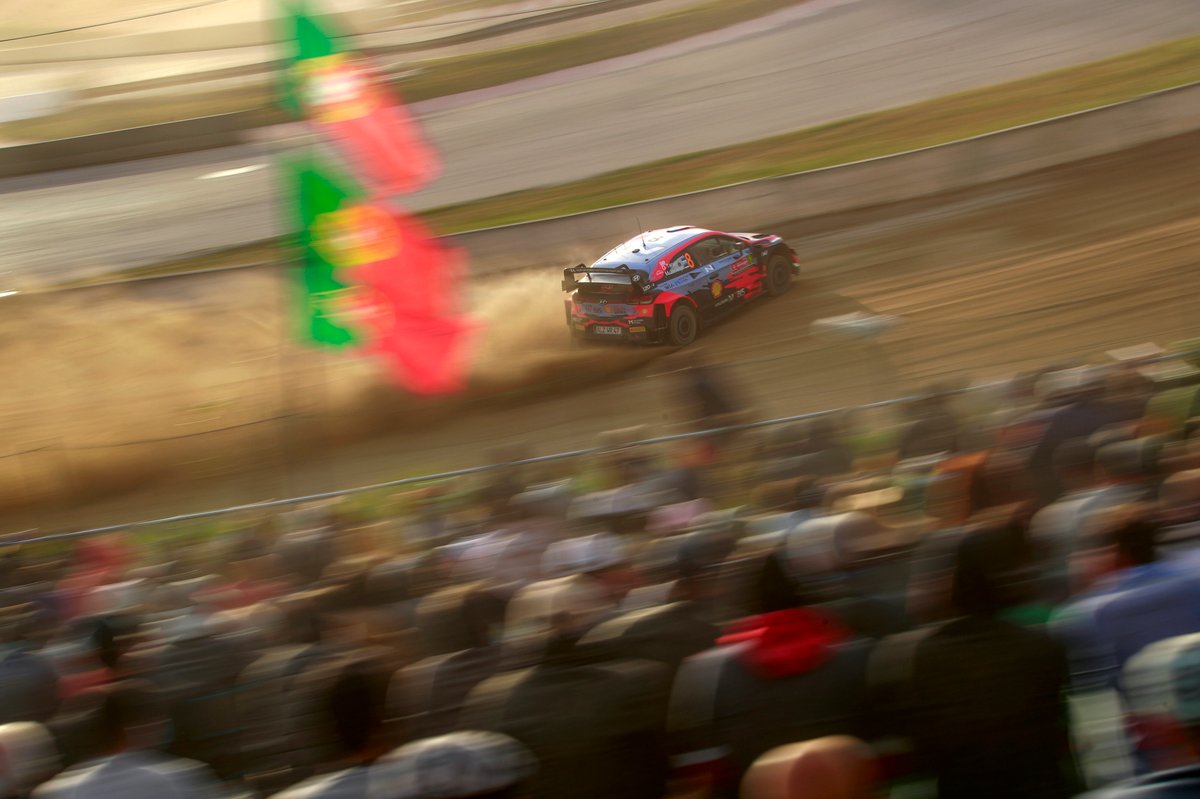 The Spanish veteran also had some dramas to contend with when a starter motor problem obliged him to sit nervously with the engine running at all times.

Despite this hurdle, Sordo was able to claim a huge 5.7s back from Evans on the 3.3km superspecial, keeping the pressure firmly on the Welshman as they prepare for Sunday’s final stages.

“Just a bit disappointed with that final superspecial really, I tried to save the tyre a little bit, probably a higher grip than we expected and so we fitted the soft (compound), but okay, at least it’s still in good shape for tomorrow,” Evans said.

“You never know what’s going to happen so we have to remain fully focused and give it our best shot.”

Having seen his cars running in 1-2-3 formation on Friday, Hyundai team principal Andrea Adamo was dismayed by the sight of first Thierry Neuville and then Tanak being forced out, alongside his second-string entry for Frenchman Pierre-Louis Loubet.

Nevertheless, he took heart from another strong performance from Sordo when the chips are down. 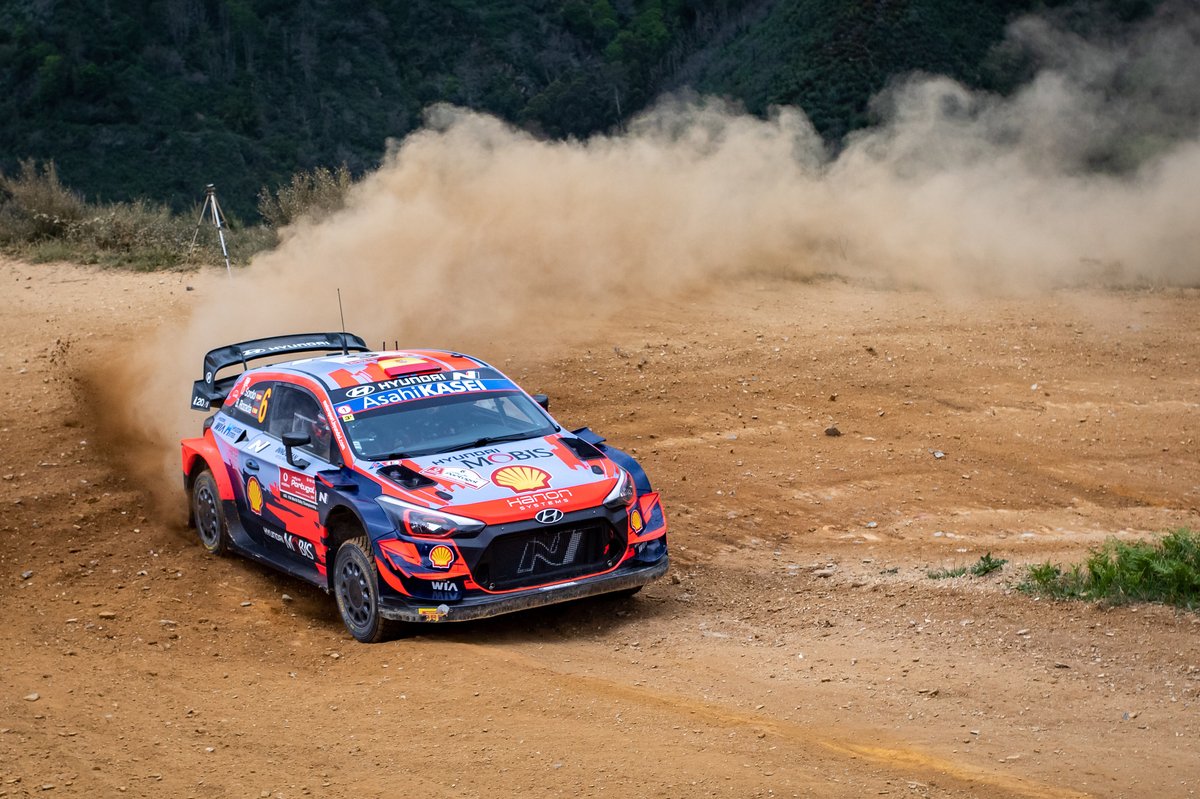 “He’s like the Navy SEAL: he comes to rescue us when we need and he’s always there.”

Behind all this drama, the Toyota of seven-time champion Sebastien Ogier, using a stock of fresh soft compound rubber, overpowered his young Japanese team-mate Takamoto Katsuta to claim third place at the end of the day.

A brief stall while donutting around a roundabout on the superspecial gave Ogier some mild concerns, but another podium remains firmly in sight for the current championship leader.

“For sure on a regular fight the podium was out of reach,” Ogier said.

“We’re only there from trouble for others… for tomorrow I have still some new tyres which could be helpful for the end of the rally.” 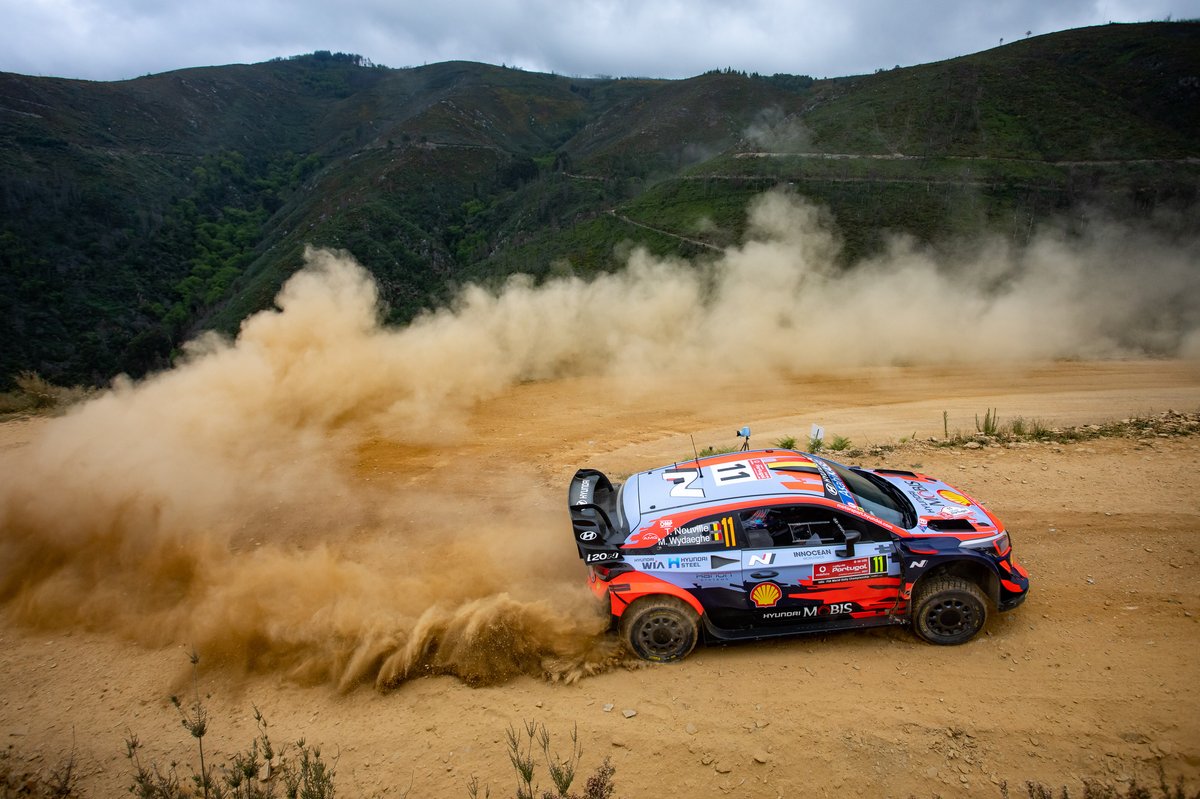 The fourth Toyota of Kalle Rovanpera was retired for unspecified technical reasons. With three cars in the top four positions, the team will not restart him on Sunday in order to preserve the car for Rallye Italia-Sardegna in 10 days’ time.

Finnish WRC refugee Esapekka Lappi continued to lead in WRC2 at the wheel of his VW Polo, enjoying a long battle with childhood friend Teemu Suninen’s M-Sport Ford Fiesta for much of the day.

Third place was held briefly by Hyundai’s Oliver Solberg until he ended up with two wheels hanging off a precipice in the final kilometres of the Amarante test.

However, the Swede was able to get going again after dropping just over a minute and rejoining in fifth place behind the Citroen C3 of defending champion Mads Ostberg and the second VW of Nikolay Gryazin.

In WRC3, the Citroen of points leader Yoann Rossel kept a narrow lead over the Skoda of Kajetan Kajetanowicz, with Britain’s 2019 European Rally Championship winner Chris Ingram third in his Skoda.

Sunday’s five stages will include two runs through the fabled 11.18km Fafe stage with the iconic jump between the crowds familiar from the Group B era to the present day. The second Fafe stage will close the rally and act as the points-scoring powerstage.