The championship-leading trio, who extended their advantage to 12 points with one race to go, led home another one-two for the Porsche 919 Hybrid, finishing 26 seconds ahead of the Neel Jani, Romain Dumas and Marc Lieb.

Porsche had to overcome a strong challenge from Audi over the course of a race that ran for much of its six-hour duration in wet and then drying conditions.

Porsche got the upper hand late in the third hour when the two Audi R18 e-trons changed tyres - the #7 onto a new set of wets and the #8 onto intermediates - whereas the 919 Hybrids double stinted their wet-weather rubber.

Audi clawed back some of the lost time by switching to slicks first and looked set to claim second with Andre Lotterer, Benoit Treluyer and Marcel Fassler after Dumas spun in the penultimate hour.

Dumas was able to recover much of the lost time and then move ahead of Audi when he stayed on the same set of tyres at his final splash-and-dash pitstop with 15 minutes to go.

A late-race full course yellow allowed Lotterer a sniff of second, but the Frenchman was able to hang on to take the position by four seconds.

Bernhard said: "I still remember the first roll-out [of the original 919] in 2013, and we could barely manage 5km and now we are sitting here having won a world championship for Porsche.

"We decided to leave the rain tyres on and that won us the race, because we were able to pull a gap."

The second Audi took fourth in the hands of Lucas di Grassi, Loic Duval and Oliver Jarvis, who finished 20s back on their team-mates.

Toyota again took fifth and sixth positions after being unable to exploit the wet conditions in the same way as it had done at the Fuji WEC round last month.

The second TS040 HYBRID of Alex Wurz, Mike Conway and Stephane Sarrazin finished ahead of its sister car, which lost two laps when Kazuki Nakajima beached the car in the gravel early in the race.

The best of the Rebellion-AER R-Ones took privateer LMP1 honours in the hands of Nicolas Prost and Mathias Beche despite sustaining serious bodywork damage in the closing stages when the latter spun.

It finished a lap up on the championship-leading G-Drive Ligier-Nissan JSP2 shared by Sam Bird, Julien Canal and Roman Rusinov.

They finished 50s ahead of the KCMG ORECA-Nissan 05 of Nick Tandy, Richard Bradley and Matt Howson to extend their points advantage.

The Chinese entrant lost time early in the race when Tandy spun and was briefly stranded in the gravel.

Porsche dominated in GTE Pro, Richard Lietz and Michael Christensen taking a clear victory aboard their Manthey 911 RSR after dominating during the wet conditions. 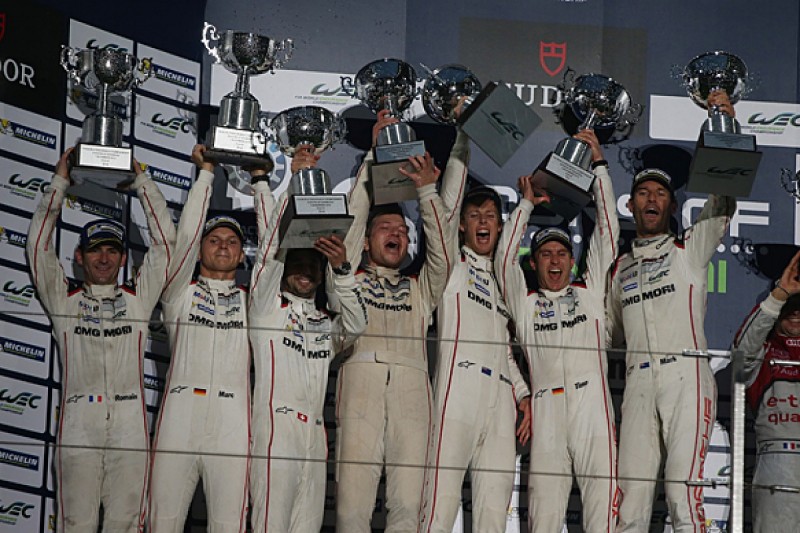