Teenager Byron, who will replace Kasey Kahne at Hendrick Motorsports in the Cup series next season, and Sadler's battle for the title heated up mid-race as they ran in third and fourth.

The pair previously finished within half a second of each other in stage two, with Byron fifth ahead of his 42-year-old team-mate.

A green-flag pitstop with just over 50 laps remaining resulted in Sadler taking the place, but Byron wrestled it back by sliding under his team-mate's car a lap later.

The two were glued to each other from then on until they made slight contact 20 laps later, but Sadler had taken the position from Byron.

Byron then took the lead back with 10 laps to go, pinching his team-mate into the Turn 4 wall.

Sadler attempted to retaliate, but in desperation, ended up clipping the #18 of Ryan Preece with less than five laps remaining.

Preece finished fifth and was confronted by an irate Sadler, who ended up eighth at the end of the race, with the two separated by officials in the pitlane.

Justin Allgaier, the third JR Motorsports challenger - with the assistance of Jimmie Johnson's crew chief Chad Knaus - encountered set-up issues and failed to work his way through the top 10, ending up 12th.

Daniel Hemric, of Richard Childress Racing, was in contention for the title until he had to pit in stage two due to a battery issue, which put him 13 laps down in 34th at the finish, and virtually guaranteed an Xfinity victory for Dale Earnhardt Jr's outfit.

The race was won by Cole Custer, who took his maiden triumph after winning all three stages to end up 15.744s ahead of runner-up Sam Hornish Jr. 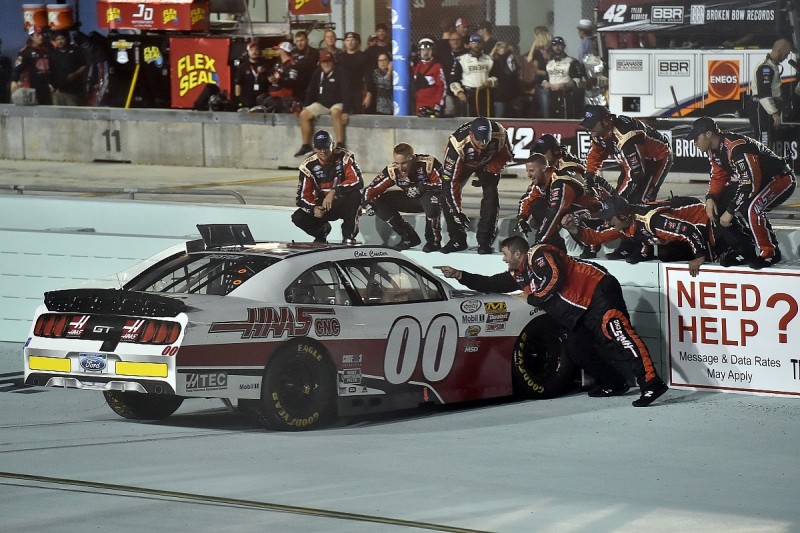 Custer became the 18th different winner of the season after passing poleman Tyler Reddick early on and went on to lead 182 of the 200 laps.

Briscoe, a 22-year-old rookie, took his first career Truck Series win for Keselowski's squad, which will now cease operations after the announcement came in August that the outfit would fold with a potential Xfinity or Cup Series move in mind.

Though Ben Rhodes led for 43 laps, Briscoe passed him on lap 96 of 134, before Rhodes out of fuel five laps before the finish to end up 19th.

The race ran without a caution and Briscoe, who led 81 laps, stretched his legs to beat champion Bell by 2.887s.

Bell, who became the fourth-youngest Truck Series champion at 22, will enter the Xfinity Series for Joe Gibbs Racing in 2018 while race winner Briscoe has not yet announced plans for next year.