The Joe Gibbs Racing Toyota driver had declared his determination to win the event to pay tribute to late team co-founder JD Gibbs, who died last month, and ended up leading team-mates Kyle Busch and Erik Jones in a JGR top three sweep.

Hamlin and Busch had held their own at the front throughout a chaotic conclusion to the race that featured two red flags and an overtime finish.

Fears of a processional, single-file event were quickly dispelled when the race got under way and the pack quickly broke out into two and three-wide dicing.

But in the final 20 laps things became rather too eventful, with a string of incidents meaning little green flag running and long delays.

Puncture-induced crashes for Kyle Larson and Brad Keselowski caused two yellows in close succession, and then Paul Menard triggered a 21-car pile-up and race stoppage by tapping Matt DiBenedetto into a spin that collected most of those behind them.

Up to then, DiBenedetto had been one of the stars of the event. In his debut with the now JGR affiliated Leavine Family Racing team, DiBenedetto ended up leading nearly a quarter of the race. 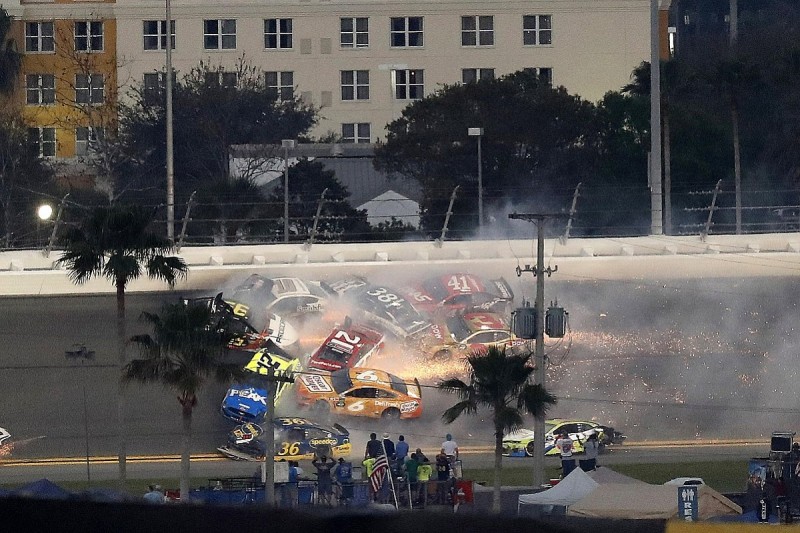 Only one lap of clean racing was completed at the restart before early frontrunner Ricky Stenhouse Jr and Larson tangled and collected Kevin Harvick, Alex Bowman and Chase Elliott among others.

Another red flag followed soon afterwards, when Clint Bowyer kicked off an eight-car crash by clipping Michael McDowell and firing himself into polesitter William Byron - whose Hendrick Chevrolet received a second heavy hit from Landon Cassill as the chaos unfolded.

The race then went into overtime and a green-white-chequered finish, which thankfully passed without incident.

Hamlin had edged ahead of Busch just as the track went yellow for the Bowyer crash, and then managed to make a break at what proved to be the final restart.

Reigning champion Joey Logano and Busch both had runs at Hamlin over the decisive two laps, but Hamlin was able to cling on in front and take the win by 0.138 seconds over Busch as their team-mate Jones - in a car battered from multiple incidents - demoted Logano to fourth.

Busch had earlier come through from 31st on the grid following his Duel incident with Jimmie Johnson to win the opening stage.

Penske's Ryan Blaney then earned the stage two win by virtue of staying out as most frontrunners pitted under a late yellow for a collision between Parker Kligerman and Casey Mears. Blaney's car was later one of those most heavily damaged in the first of the red flag incidents.

The destructive end to the race allowed several underdogs to make it into the top 10 - led by Front Row Motorsports Ford driver McDowell in fifth and Germain Racing's Ty Dillon in sixth.

Larson finished seventh despite his involvement in various shunts, while JTG Daugherty driver Ryan Preece was briefly a top three contender in the final shootout before slipping to eighth. That was still a remarkable result given how incredibly close he had come to being wiped out in two of the late crashes. 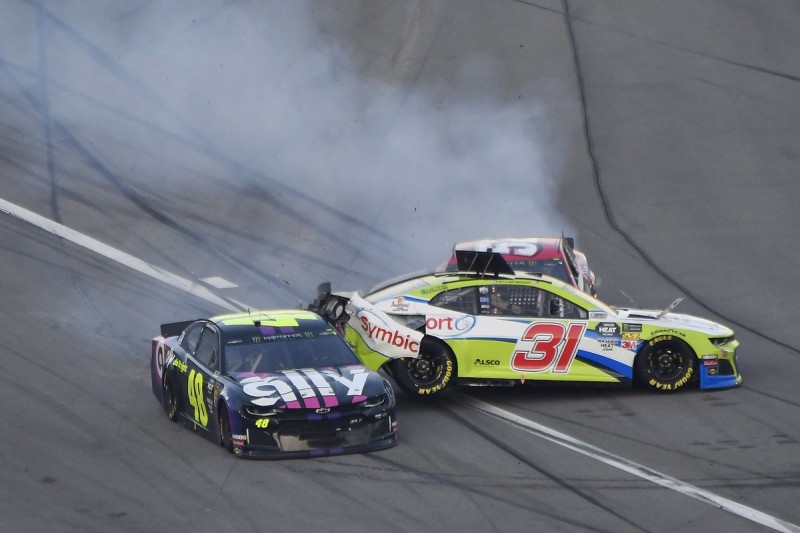 Johnson's eventful day also included heavy damage from a bizarre crash in which Rick Ware Racing team-mates Cody Ware and BJ McLeod collided at the final corner then spun into the pitlane entry and hit Tyler Reddick, Johnson and Stenhouse as they were slowing to pit. Clash winner Johnson recovered from that to finish ninth ahead of Ross Chastain.

Last year's Daytona 500 victor Austin Dillon spun early on while dodging an incident triggered by Kurt Busch brushing Stenhouse and spinning into Bubba Wallace and Jamie McMurray - who later managed to lead in his farewell race. Dillon subsequently picked up a pit procedure penalty and was caught up in the biggest of the multi-car pile-ups but got going again to finish 16th.

Other prominent victims of the 21-car shunt included 2017 Cup champion Martin Truex Jr in his first championship round start with JGR and Aric Almirola - the man Dillon had sent into the wall on the final lap of last year's 500 as they battled for the lead.

Almirola's Stewart-Haas Ford rode up over David Ragan's Front Row Mustang in this year's major crash, but both emerged unhurt.