Jimmie Johnson has apologised to Kyle Busch after being involved in his second controversial collision of NASCAR's Daytona 500 build-up.

Though Johnson immediately asked his Hendrick Motorsports spotter to relay an apology to Busch, it was vehemently rejected via team radio.

The tangle followed the incident in last Sunday's non-championship Clash race in which all bar four of the 20 cars were enveloped in a crash triggered by Johnson spinning leader Paul Menard. Johnson then won the race when heavy rain arrived during the ensuing caution.

"I just got it wrong, clearly," he said.

"Unfortunately I just turned him around.

"Apologies to him and his team. I know that is not what they wanted with their 500 car, but I just got it wrong there.

"I firmly believe the Clash was a racing incident. This one was a mistake on my behalf and everybody makes mistakes." 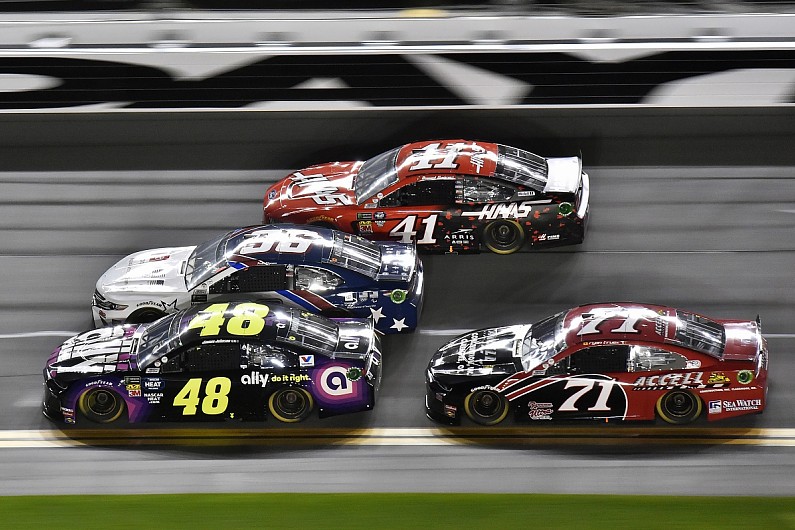 Menard and Johnson had cleared the air over their incident on Wednesday, with Menard accepting Johnson's driving was not intentional.

Busch said ahead of Friday practice that he had spoken to Johnson after the Duel.

"He texted me later last night and said 'I'm sorry, that was totally my mistake I just misjudged it'," said Busch.

"It is what it is. There's nothing that's going to change it for now.

"It's just unfortunate for me and our team not being able to run and finish the race how we wanted to and see if we could've bettered our starting spot from qualifying.

"We'll start at the back and we'll just have to come through and try to do what we can.

"My Camry is fast and had good speed and felt like it was driving pretty well. We'll just run some more laps today to try to finetune it and make sure it's all good."

The Duel results mean Johnson is set to start the 500 from 17th and Busch from 31st.

Johnson's Hendrick team-mates William Byron and Alex Bowman share the front row thanks to their results in last Sunday's qualifying session, while Kevin Harvick and Joey Logano earned third and fourth on the grid by winning the Duels.