Penske driver Logano and Front Row Motorsports racer McDowell were the last Ford Mustang runners in the depleted lead pack at the final restart after the attrition of the crash-filled final stages.

Logano, who had one of the fastest cars in Sunday's race, was looking for drafting help from McDowell to assist him with getting a run on the leading Joe Gibbs Racing Toyotas of eventual winner Denny Hamlin and Kyle Busch.

But instead McDowell elected to work with Busch, who finished second as Logano and McDowell ended up fourth and fifth.

Logano expressed his displeasure with McDowell in a conversation in the pitlane after the race.

Asked about his exchange with Logano, McDowell said: "I just told him that my team doesn't pay me to push Joey Logano to a win. That's not what I get paid to do.

"At 200mph, I made a split-second decision on what was the fastest car and who had the best shot of winning the race and that's where I went."

The leading Fords teams had cooperated on strategy and drafting at times throughout the race, with collaboration on track between Penske, Stewart-Haas Racing and Roush Fenway.

Logano said he "thought that was going to be the plan" with McDowell as well.

"I was just surprised by the situation and what happened," Logano said.

"At that point he wasn't going to win, he'd have to pass Kyle.

"He's racing, too, I guess and we can't win these things alone. We've proven that quite often but we did what we could do."

McDowell argued that Logano did not have a realistic chance of victory anyway, and countered that Front Row had received little help from the other Fords.

While the top Ford teams collaborating was not a surprise, Toyota squad JGR and lead Chevrolet runner Hendrick Motorsports had raised eyebrows by appearing to work together in the draft earlier in the event. 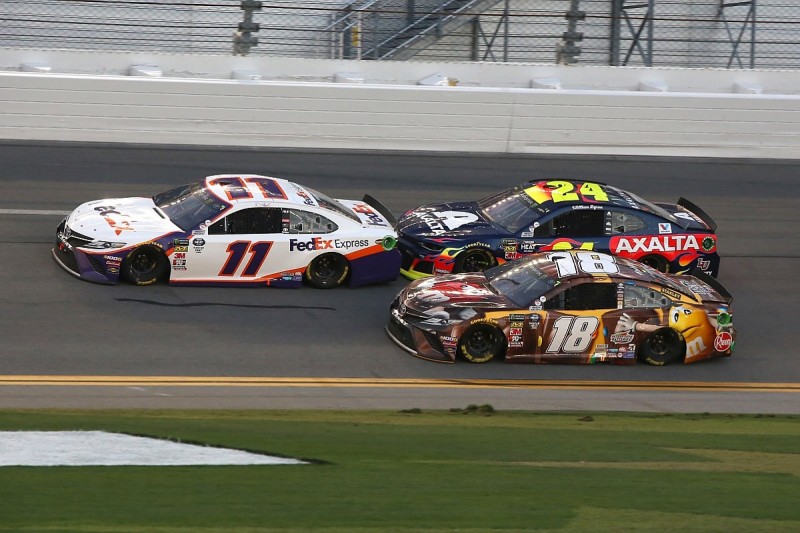 Hamlin had hinted before the race that this was likely due to the paucity of Toyotas, with only the four JGRs Camrys, Matt DiBenedetto's affiliated Leavine Family example and part-timer Parker Kligerman's Gaunt Brothers Camry in the 40-car field.

"You're going to need help from somebody," said Hamlin.

"Most of the time it's more of an advantage to having fewer Toyota cars because the information is kept within a tighter group.

"We're all within the JGR organisation so on a weekly basis we always feel like we have an advantage. The information isn't getting spread out among three different race teams.

"The downside is when you come to races like these where you have drafting and things like that, you're outnumbered so you're facing up against 12 Fords, 12 Chevrolets and you've got just a handful of Toyotas.

"Not to give away too much but I think today we're going to catch some people by surprise and perhaps link up with a manufacturer and gang up on another manufacturer."

JGR went on to finish 1-2-3 in the race with Hamlin, Busch and Erik Jones.