Elliott, who won the second stage and had battled for the lead throughout the race, was never more than one second clear of Truex during the final 15 laps of the 90-tour event.

Furniture Row Racing's Truex threatened him most significantly on the final lap, after Elliott had locked up at the tight Turn 1 right-hander, allowing Truex to close up.

But Elliott withstood the pressure, eventually claiming victory by 7s as Truex ran out of fuel with two corners to go and trundled home second.

Elliott had finished second on eight occasions in his 98 previous NASCAR Cup starts and books his place in the playoffs with the victory. 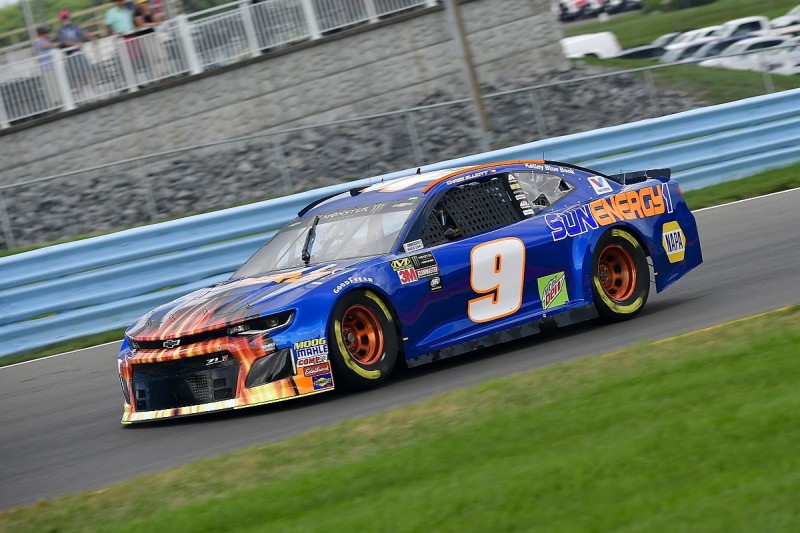 With a caution deployed as a result of a breakdown for Matt DiBenedetto, almost all the field dived into the pits at the same time.

A fuel hose issue meant that Busch failed to receive sufficient fuel at the pitstop and had to sacrifice his race lead by making another stop one lap later.

Despite dropping to 24th, Busch battled back through the field in the closing stages, eventually finishing in third place.

He had fought with Elliott throughout stages one and two, with the two exchanging positions on several occasions.

Busch was in position to win the opening stage, but sacrificed the points by pitting before the end of in order to maintain track position at the start of stage two.

Elliott opted for the same strategy and Truex cycled to the front of the field to take the stage win as a result.

After finishing with all four cars in the top 10 at the last round, JGR ended with three in the top five at Watkins Glen, with Denny Hamlin 13th.

Despite starting from pole and challenging for the lead early-on, he also dropped out of contention during the final phase of pitstops.

Hamlin left the pitlane with the wheel gun hose wrapped around the left-rear tyre and picked up a drivethrough penalty as a result and had to come back from 25th.

Kyle Larson and Jaime McMurray finished sixth and seventh respectively after running in the top 10 throughout the majority of the race.

William Byron earned another top 10 finish in eighth, ahead of Kurt Busch, who recovered from starting 36th on the grid as a result of an inspection infringement to finish ninth.

Despite taking six victories so far in 2018, Kevin Harvick finishing 10th after starting in 15th.