Stewart-Haas Racing driver Kevin Harvick dominated to win at Indianapolis, the final race before the start of the 2019 NASCAR Cup playoffs

Seven-time Cup champion Jimmie Johnson failed to qualify for the playoffs for the first time in his career, after being pitched into a spin and hitting the wall on lap 105 of the 160-lap race.

Clint Bowyer and Ryan Newman made it through to complete the 16 contenders for the title race, with Daniel Suarez joining Johnson in missing out.

Polesitter Harvick led 118 of the 160 laps, finishing third in stage one before beating Kyle Larson to victory in the second stage.

Larson was one of several frontrunners to drop out of contention for victory in a race with nine cautions. At the restart to open stage three, the Chip Ganassi Racing driver made wheel-to-wheel contact with leader Harvick as the two dived towards Turn 1.

Ganassi opted to make a precautionary pitstop for fender damage repair, dropping Larson outside the top 20. His fightback was halted by a spin in turbulent air at Turn 3 that pitched him into the inside wall.

Stage one winner Joey Logano was the remaining threat to Harvick at the final restart, starting on the front row.

But Harvick was able to power around the outside of the Penske driver at Turn 3 before building a four second advantage over the 2018 series champion, who settled for second. 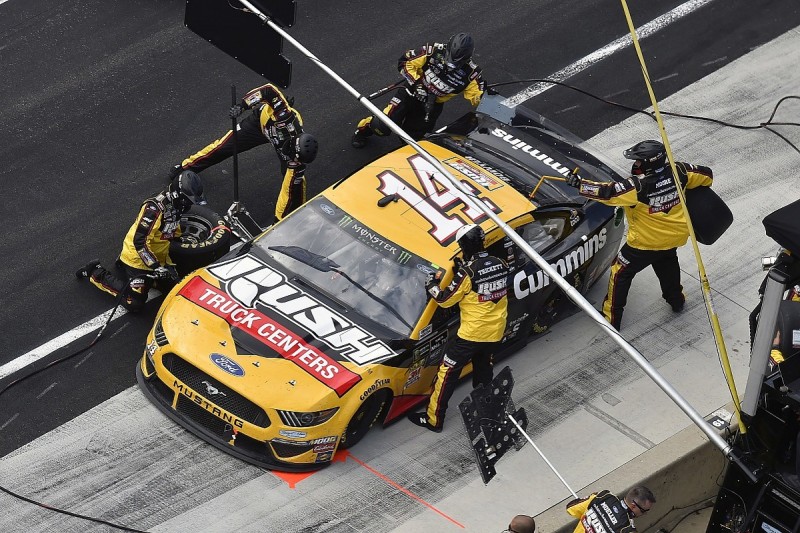 Bowyer, who entered the weekend eight points clear of the playoff cut-line, was inches from colliding with a spinning Alex Bowman in the closing stages.

Newman was level on points with Suarez either side of the playoff boundary at the start, ending up just four points clear of Suarez.

SHR's Suarez hit slapped the wall at Turn 2 on lap 10, but a caution allowed the team to carry out repairs.

He was fourth early in the final stage but cycled to the back of the field after being the first to pit just before a caution was called. He rallied in the final laps but could only finish 11th.

Johnson's challenge to climb into the playoffs ended when he was squeezed on the inside of a three-wide battle with Hendrick team-mate William Byron and Kurt Busch at Turn 2 at the start of stage three. Johnson spun into the wall and out of the race having run within the top 10 for the majority of the day.

Richard Petty Motorsports' Darrell Wallace Jr threatened to secure a surprise playoff spot with a shock win, instead clinching his best result of the year - and first top 10 of 2019 - with third.

He passed a battling Ryan Blaney and Denny Hamlin on the outside of Turns 3 and 4 in the closing stages to grab the place.

Hamlin and Blaney would slip further down the field, losing out to Byron and Bowyer for fourth and fifth.

Brad Keselowski and Erik Jones made light contact at Turn 2 late in stage one, with both drivers then making hard contact with the wall. A red flag was required for barrier repairs but both drivers were unscathed.