Stephen LickorishThe Formula Vee maverick who has reached the top
And Then There Were Three
By Richard Barnes, South Africa
Autosport-Atlas Writer

Following the controversy of the United States Grand Prix, Formula One was back in proper action in France to reach to halfway point of the season, in a race which clearly showed the battle for this year's title is down to three men only. Richard Barnes analyses the Championship situation after the 10th round of the season

After the uproar concerning the Michelin tyre failures and six-car race at Indianapolis two weeks ago, it was hoped that the French Grand Prix weekend would mark a comparatively quiet and uncontroversial return to normal Formula One racing. While the lack of penalties and punishments (at least, until September) had served to calm tensions between the seven Michelin team owners and Max Mosley, the FIA president found himself under fire from a different quarter - the drivers.

It had started with the declaration, signed by the Michelin and Minardi drivers, backing the teams' suggestion of a chicane and refuting the FIA's alternative of applying a speed limit through Indianapolis' banked Turn 13. That declaration drew an angry response from Mosley, who telephoned Red Bull Racing's David Coulthard to express his displeasure at the drivers' actions. Coulthard was singled out presumably because, as a director of the Grand Prix Drivers' Association, his signature appeared at the head of the document, making him appear to be the chief instigator.

Coulthard, in turn, responded with a scathing condemnation of the current qualifying and engine rules, concluding that the drivers were looking forward to discussing safety issues at a Silverstone meeting with Mosley on Friday. Mosley's reaction was to cancel the meeting, claiming that Coulthard had politicised the agenda.

The GPDA escalated the conflict further by releasing an open letter to Mosley, expressing disappointment at his approach to safety. The initial Indianapolis declaration had been signed by all but four of the active racers - Ferrari's Michael Schumacher and Rubens Barrichello, and the Jordan pairing of Narain Karthikeyan and Tiago Monteiro. In the follow-up open letter, the number of dissenters had dropped to three - Michael Schumacher and the Red Bull teammates Coulthard and Christian Klein.

It is paradoxical that Coulthard, the driver at the epicentre of the row with Mosley, should be one of only three not to sign the open letter. However, given that neither Klien nor Red Bull tester Vitantonio Liuzzi signed, it is reasonable to conclude that their actions were mandated more by team interests than personal conviction.

With Rubens Barrichello and the Jordan drivers signing the open letter, that leaves Michael Schumacher as the only driver in F1 who has refused to put his signature on any of the recent drivers' correspondence with Mosley. Time will tell whether Schumacher was merely canny to avoid what is becoming an openly political confrontation, or whether his lack of support will undermine the standing of the drivers' body. At the very least, it will threaten his position as president of the GPDA.

One thing that will have united all the drivers was the sense of relief to be back in the cars and racing at Magny-Cours, rather than dealing with the press and political machinations of the sport's governance. Just as the open letter had whittled the dissenters from four to three, the French GP likewise narrowed this year's WDC title hunt down to just three contenders. Fittingly, those three filled the podium positions in France. 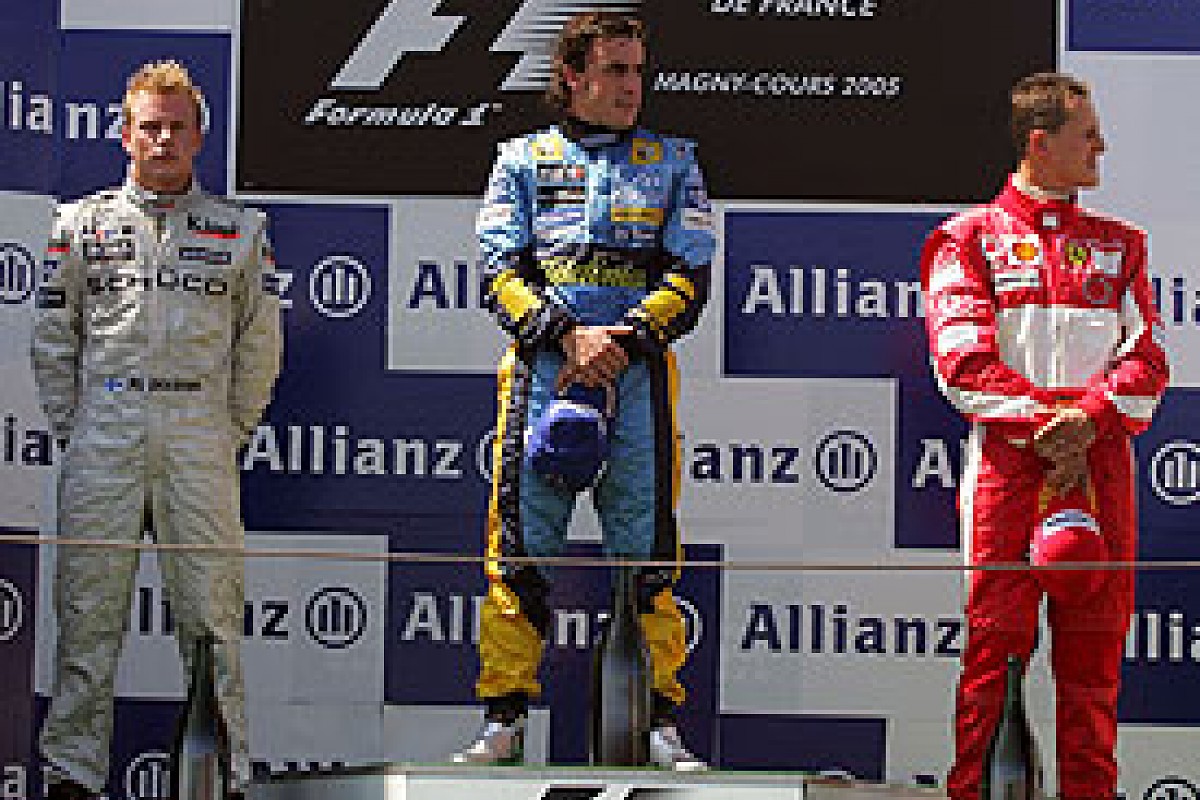 Mathematically, it is of course still possible for even BAR's Takuma Sato, the only driver in the field not to score any points yet, to win the Championship. But, realistically, it is now down to Renault's Fernando Alonso, McLaren's Kimi Raikkonen and Ferrari's Michael Schumacher.

Prior to Indianapolis, there were several drivers who still harboured outside hopes of getting into the Championship hunt: Juan Pablo Montoya, Giancarlo Fisichella, Jarno Trulli and Rubens Barrichello. As four of the most seasoned professionals in the field, they would have known to expect no favours from either Michael Schumacher or Raikkonen. Still, there was always the hope that the relatively inexperienced Alonso would crack under the pressure, bringing them back into the fray.

Alonso silenced those hopes in the most emphatic manner on Sunday. And, with the Michelin drivers not scoring in America and the leading three putting more daylight between themselves and the chasing pack at Magny-Cours, the quartet of erstwhile hopefuls will have to be content with a spoiling role for the rest of the season.

It's not a role to be relished by any driver with Championship aspirations, but will be a particularly unsavoury prospect for three of the four. By now, Rubens Barrichello should have come to accept the inevitable - that it will take truly freakish circumstances for him to emerge as the Ferrari frontrunner in the Championship.

For Montoya and Fisichella, there is the consolation prize of rotten luck. Yet they will be acutely aware that luck is never guaranteed in Formula One. The only thing any driver can expect is a competitive car to drive. Both have enjoyed that luxury in 2005, and both have been outscored by their younger teammates. And that, ultimately, is the only incontrovertible factor.

That leaves Toyota's Jarno Trulli, the only driver of the four with genuine reason to feel aggrieved. He's had the least competitive car of the four and has done the most with it. It must have been painful for the Italian to see Alonso vanishing into the distance - both in Sunday's race and the Championship - when Trulli, in equal machinery at least for the first half of last season, had the beating of the Spanish star.

Trulli might have drawn a modicum of satisfaction from helping his old teammate and friend Alonso, while holding up Michael Schumacher. But racers are in the business for selfish reasons and achievements, not to help old friends or spite rivals. What must be particularly galling for Trulli is that his astounding one lap qualifying skills are no longer cause for praise, but rather a source of irritation among his fellow professionals.

All season long, Trulli has played the spoiler, qualifying the Toyota further up the grid than it seemingly deserves to be - and then holding up the pack as the leaders scamper away. From the moment Alonso made it into the first turn ahead of Trulli on Sunday, the race was settled. It allowed Alonso to drive at his own pace and ensure victory, the first in 22 years for Renault in front of their ecstatic home crowd. 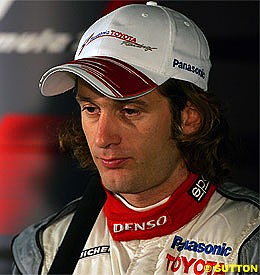 Trulli's inability to emulate his qualifying form in his race pace might have drawn grumblings of discontent from Ferrari technical director Ross Brawn, as well as fans who would prefer to see the fastest cars in front from the start. It comes back to the question posed by the Indianapolis debacle, of whether F1 is sport or entertainment.

In Trulli's case, as at Indianapolis, it is a very simple answer. F1 is a sport, and Trulli's job is to drive as fast as the equipment, the circuit and the conditions will allow. It is a job that he does with exceptional dedication and skill. During the late 1980s, when Prost and Senna were dominating for McLaren, team chief Ron Dennis stated that it was incumbent upon the other teams to speed up, not for his team to slow down. Jarno Trulli may well be moved to say the same thing in 2005.

Trulli may be taking flak from other teams and drivers, but he can also draw one consolation from a frustrating French GP in an equally frustrating season. At his previous employer, there is a certain young Spanish driver who must be immensely relieved that Trulli is driving a Toyota and not a Renault this year.