Swiss Moto3 rider Jason Dupasquier has tragically died from injuries sustained in a horror crash at the end of qualifying for the Italian Grand Prix at Mugello on Saturday.

The 19-year-old crashed at the Arrabbiata 2 right-hander at Turn 9 at the end of qualifying for the Moto3 class at Mugello while on a flying lap.

Tech3 KTM rider Ayumu Sasaki was following Dupasquier at the time and could do nothing to avoid the Prustel GP rider – with Sasaki then launched in the air.

While Sasaki walked away from the incident, Dupasquier had to be treated trackside by the circuit’s medical team for around half an hour before he was airlifted to hospital in Florence.

The FIM stated on Saturday that Dupasquier was in a “very serious condition” in the Careggi hospital in Florence but was transferred to hospital in a stable condition.

Tragically, Dupasquier succumbed to his injuries. MotoGP confirmed his passing on Sunday morning.

A statement read: “Dupasquier was involved in a multi-rider incident between Turns 9 and 10, with the session red flagged thereafter.

“FIM Medical Intervention Vehicles arrived at the site immediately and the Swiss rider was attended to on track before being transferred by medical helicopter, in a stable state, to Careggi Hospital in Florence.

“Despite the best efforts of circuit medical staff and all those subsequently attending to the Swiss rider, the hospital has announced that Dupasquier has sadly succumbed to his injuries.

“The FIM, IRTA, MSMA and Dorna Sports pass on our deepest condolences to Dupasquier’s family, friends, team and loved ones.” 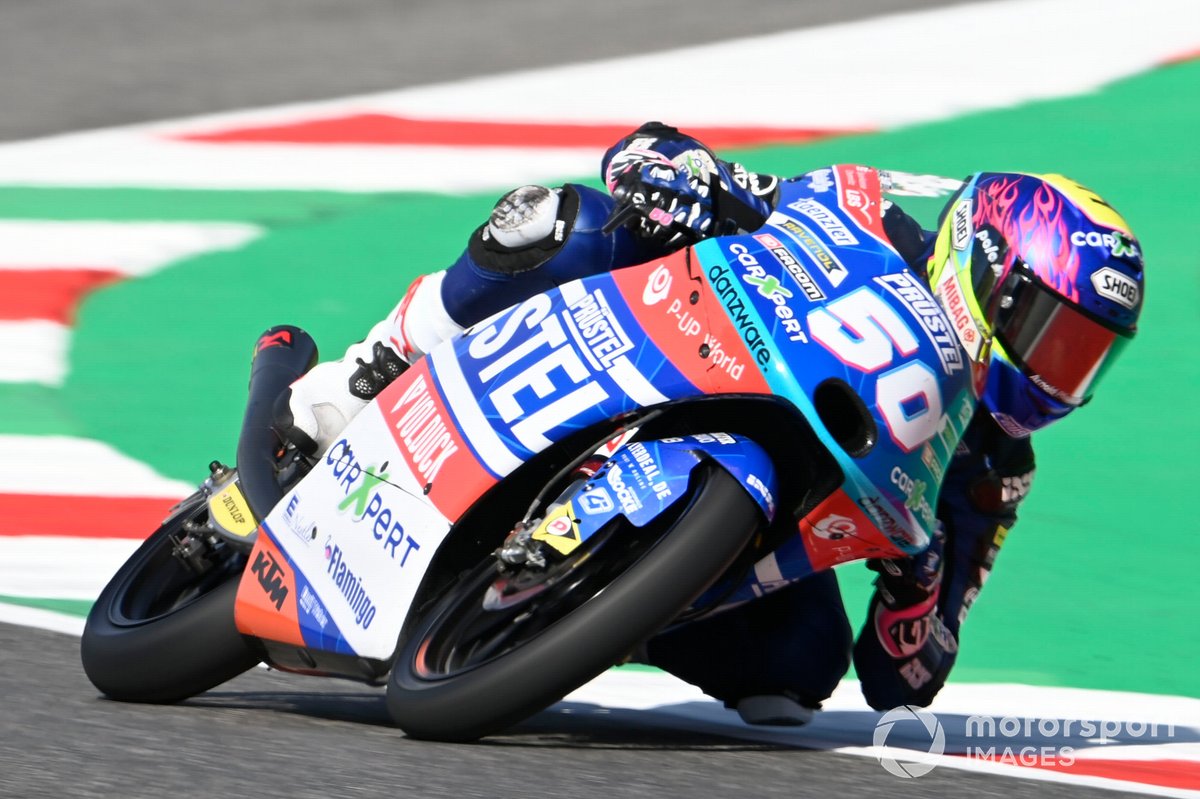 Dupasquier cut his teeth in the national Swiss Supermoto scene, winning multiple championships before graduating to road racing in 2016.

Winning the ADAC Moto3 championship that year, Dupasquier moved into the CEV Junior Moto3 world championship from 2017 and was due to race in Red Bull Rookies Cup that year.

However, he was forced to sit out the campaign when he broke his femur at the start of the CEV season.

He raced in the Red Bull Rookies Cup in 2019 and was eighth in the championship, earning a step up to the Moto3 world championship last year with Prustel GP.

Though never troubling the points in his first season, Dupasquier made a strong start to the 2021 season on his Prustel GP KTM.

The Swiss rider scored points in all of the first five races, taking a best result of seventh at the Spanish GP at Jerez.

Ahead of this weekend’s Italian GP, he is 10th in the championship having amassed a reasonable haul of 27 points.

The MotoGP paddock will observe a moment of silence at 13:45pm local time at Mugello.

Dupasquier is the first grand prix rider to lose his life on a race weekend since Moto2 racer Luis Salom tragically died from injuries sustained in a crash during practice for the 2016 Catalan GP.