Leopard’s Dennis Foggia fended off Jaume Masia by 0.036 seconds to claim his first win of 2021 in a thrilling Moto3 Italian Grand Prix.

After the race it was announced Swiss Moto3 rider Jason Dupasquier had tragically died from injuries sustained in a crash at the end of qualifying at Mugello on Saturday.

Drama erupted on the opening lap of the race when Max Racing’s Adrian Fernandez ran into the back of VR46 Academy wildcard Alberto Surra at Turn 1, taking both down.

Further round the lap at the Casanova/Savelli section, Tech3 KTM rider Deniz Oncu highsided out of the race while behind him a similar crash for CIP’s Max Kofler ended up collecting Andrea Migno (Snipers Honda) and Avintia’s Carlos Tatay.

The marshals managed to clear the scene by the time the field came round on lap two, the battle for the lead typically chaotic at Mugello.

The lead group onto the final two laps stood at 14 riders, with Jaume Masia on the Ajo KTM outdragging the pack into San Donato at the start of the penultimate tour. 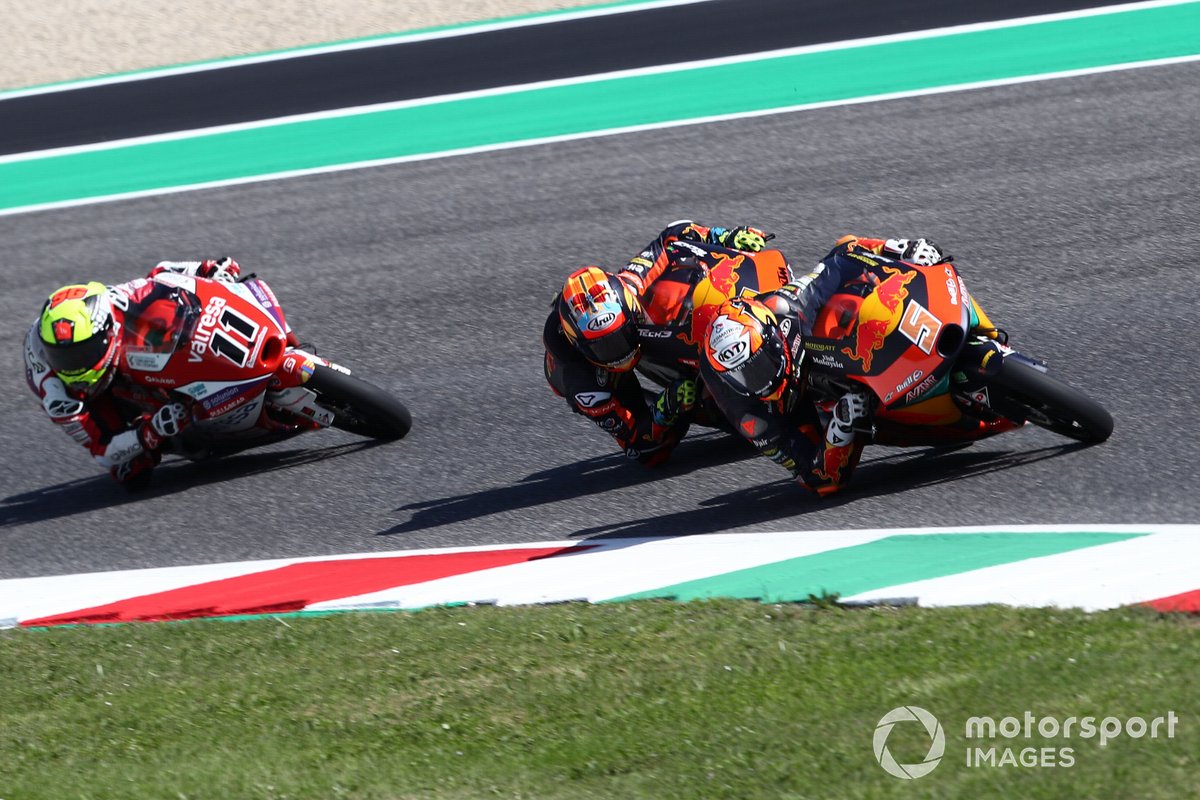 But the Spaniard ran wide and allowed Fenati and Foggia to come through, while Acosta found himself down in 11th.

Fenati managed to eke out a handful of bike lengths over Foggia across the penultimate lap, but was powerless to stop Foggia blasting through into the lead at the start of the final tour.

Foggia was given crucial breathing space when Gresini’s Gabriel Rodrigo scythed past Fenati at Savelli.

Masia came through on Rodrigo into the Scarperia right-hander and managed to close the gap to Foggia into the final corner.

But Foggia was able to use the power of his Honda to keep the charging Masia at bay for his first win since Brno last year.

Rodrigo completed the podium for his first rostrum since Barcelona 2018, with Ayumu Sasaki – who was involved in the Dupasquier incident – was fourth on his Tech3 KTM ahead of Binder.

Fenati was sixth in the end ahead of McPhee, who was promoted two spots due to Acosta and Sergio Garcia (Aspar GASGAS) being demoted a place each for exceeding track limits on the last lap.

Acosta holds onto a sizable championship lead over team-mate Masia of 52 points, with Sasaki moving up to third a further two points adrift.