Newgarden had to overcome group two qualifying, which was red-flagged after rainwater from the tyre barrier and tarpaulin at Turn 6 suddenly spilt across the track and caused a 50-minute delay.

The Penske driver had a to-and-fro battle with Sebastien Bourdais but looked under threat from team-mate Will Power until he bounced off the wall at Turn 6 and lost seven tenths.

That meant Newgarden's 1m15.1825s best time remained unbeatable, while Power's mistake left him sixth in the session and starting from 11th on the grid.

Rossi had looked a threat in group one running when both he and the fellow Honda-powered machine of Chip Ganassi Racing's Scott Dixon looked a cut above on the primary tyres.

But heavy rain overnight meant the alternate tyre compound was the best option and Rossi's final flyer of a 1m15.1825s put him almost half a second quicker than Harding Steinbrenner Racing's Colton Herta.

That margin was exaggerated by Herta making a mistake on his best lap.

But Herta's second place was saved by the fact that Dixon was compromised with a steering problem following the repair of his car after a heavy collision with the tyre wall during the opening race.

Herta will now start the race fourth on the grid behind Andretti's Zach Veach, who sealed his best-ever IndyCar qualifying result. 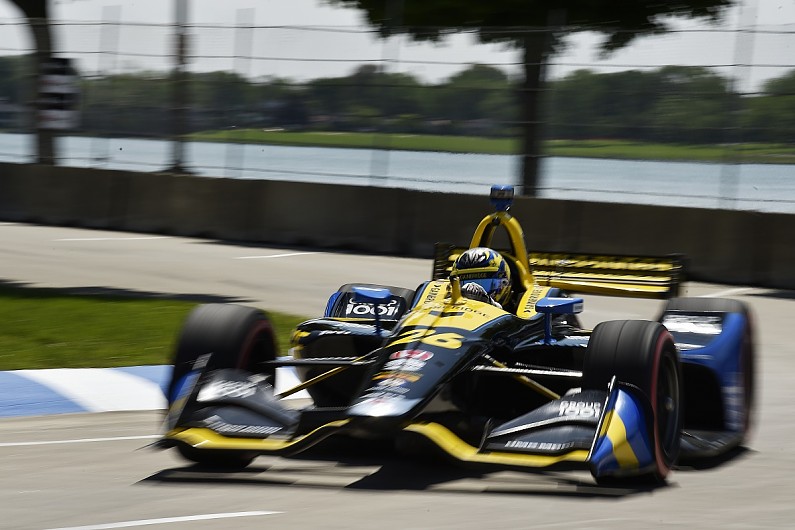 The Ganassi driver's team-mate, Felix Rosenqvist, starts directly behind Dixon in seventh and was frustrated by what he perceived as Power holding him up at several corners.

Rookie Patricio O'Ward was the fastest Chevrolet in the group one running and took eighth on the grid ahead of Bourdais and Spencer Pigot.

Indianapolis 500 winner Simon Pagenaud believes he used up his rear tyres too quickly and stopped himself from a setting a competitive time, meaning he will start in 14th place.

He was in better shape than Rahal Letterman Lanigan Racing's Graham Rahal who will start from the back row after existing electrical issues with his gearbox hit hard just as he began his first flying lap on the alternate compound.

Rahal will start 22nd and last on the grid.