Red Bull junior Vips fought off team-mate and polesitter Liam Lawson to claim the lead on the opening lap, and eventually crossed the chequered flag over a second ahead of Alpine junior Piastri to take 25 points.

The win – his second in F2 after breaking his duck in yesterday’s second sprint race – puts the Estonian up to fourth in the drivers standings, after a pointless opening weekend in Bahrain that put him on the back foot.

Race one winner Robert Shwartzman finished third for Prema, having started 10th, while UNI-Virtuosi’s Felipe Drugovich came through from 11th to record his first points of the weekend in fourth.

The Brazilian passed Campos Racing’s Ralph Boschung late on in the 28-lap race, but the Swiss still finished fifth ahead of a disappointed Lawson.

The race start was aborted after Williams Formula 1 reserve Jack Aitken, who should have started 14th for HWA Racelab, and Campos Racing’s Matteo Nannini, set to start 17th, were unable to get off the line. The pair were returned to the pitlane but Nannini encountered further problems and was unable to start the race.

Vips took the lead from Lawson on the first turn, while the Kiwi was handed a 10-second penalty for a defensive move against Theo Pourchaire on the first lap, having forced the ART Grand Prix driver off the track into the pit lane exit.

Carlin’s Dan Ticktum, Pourchaire and DAMS’ Marcus Armstrong then tangled at Turn 3, forcing Pourchaire into the escape lane and eliminating Ferrari junior Armstrong for the second race in a row, while Monaco feature race winner Pourchaire was also forced to retire.

The incident resulted in a safety car, under which Ticktum pitted with front wing damage and changed his tyres, but it would not count towards his mandatory pitstop because the window would not open until lap six. He also received a 10-second penalty for causing the collision. 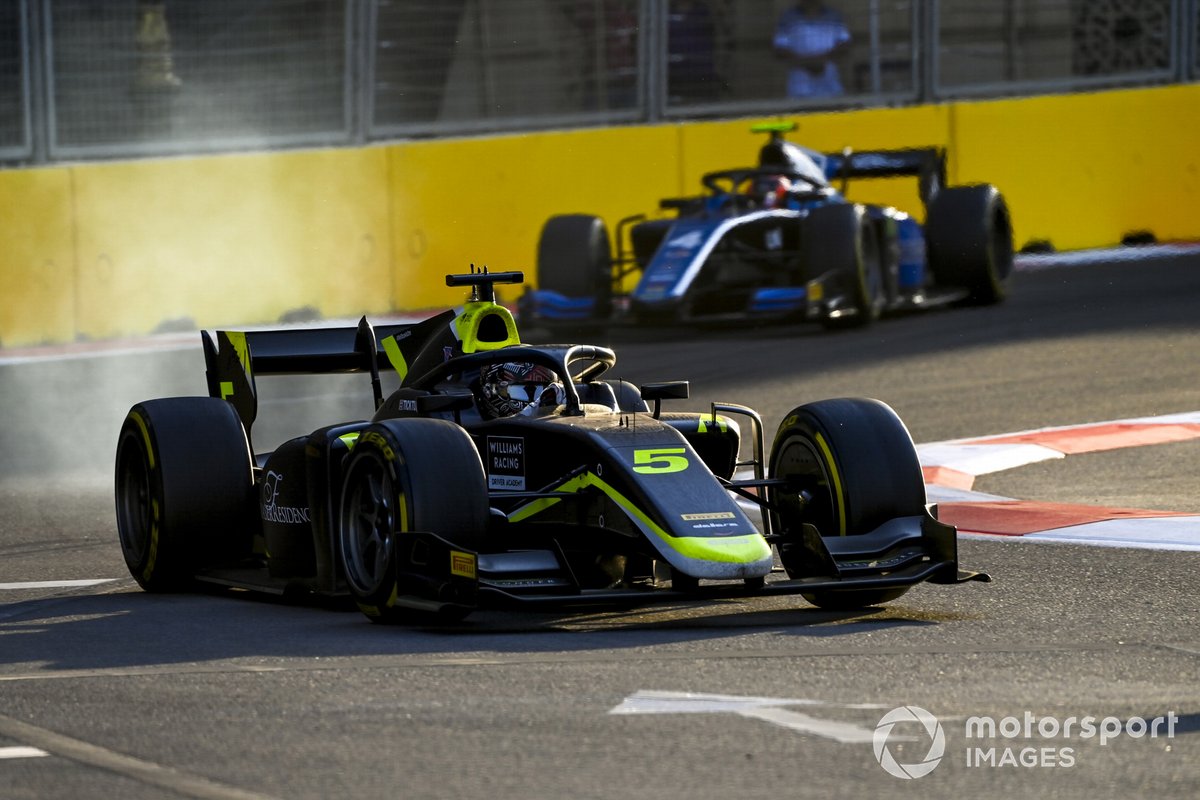 The safety car came in on the second lap, with Piastri and Lawson tussling for second on the restart.

Vips was the first of the leaders to pit on lap six, as soon as the window opened, before his team-mate pitted the following lap and resumed tenth after serving his penalty.

Piastri was then hit with a five-second penalty of his own - to be added to his race time - for an unsafe pitstop release in front of Drugovich.

Despite having been dropped down the order by his penalty, by lap 15 Lawson was up to eighth place after passing Carlin’s Jehan Daruvala.

But Vips was able to hold off the Australian's advances to the end, with Piastri still finishing second once the penalty had been applied to close to five points behind championship leader Guanyu Zhou, who failed to score in 13th.

Ticktum finally pitted on lap 22 and served his penalty before rejoining in 10th. Aitken was the last to pit and resumed 11th.

Ticktum made up two positions by lap 26, with a stunning double pass on both Christian Lundgaard and David Beckmann on the run to Turn 1, but despite his tyre life advantage could rise no higher than eighth.