FIA Formula 2 driver Juri Vips said his sprint race win in Baku is “redemption” after a gearbox issue robbed him of a win in Bahrain.

The Hitech Grand Prix driver was on course to win the first race of that weekend when a downshift issue struck that led to him trundling home in 16th position.

It came after he was disqualified from the Friday’s qualifying results after the undertray fins on his car were found to have breached technical regulations.

But he took his first F2 win at the Baku City Circuit on Saturday, starting the second sprint race in third before eventually snatching victory.

The Red Bull Junior said he was “relieved to get [his first win] under my belt” and believes he is now on an “upward trajectory.”

Vips said: “It felt very good, I feel it’s a bit of redemption from Bahrain because we were gonna win the second race there and the gearbox failed, so it was kind of a relief crossing the line with everything gone well.

“Another positive is that we have another opportunity to do the same tomorrow, so yeah, happy.”

He added: “Yeah, definitely relieved to get it under my belt.

“Liam [Lawson, his team-mate] has also lost a lot of points so far but I think I’ve lost a lot more with this Bahrain weekend especially.

“We had very strong pace there and I think we could have walked away with 40 points but we walked away with zero, so yeah, I think things could be much better but to be honest I’m very happy to be on an upward trajectory. 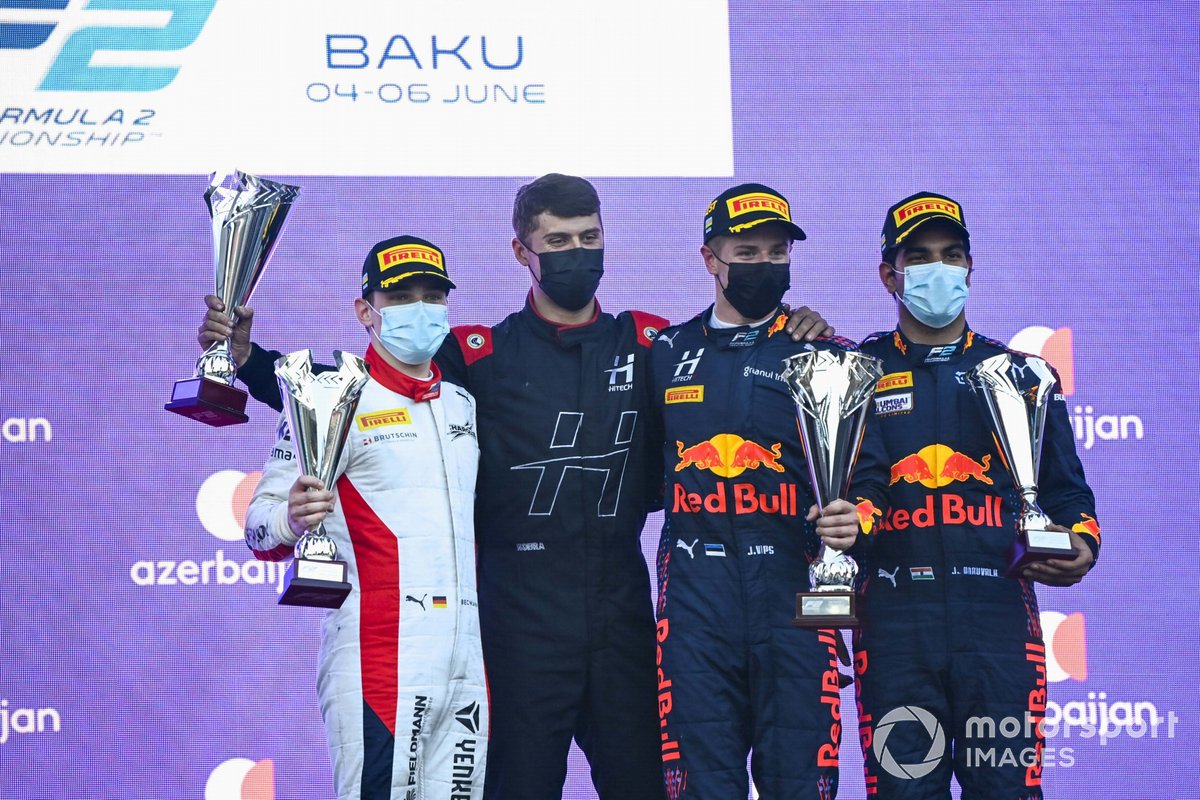 “It seems like we’re really figuring things out and my season is gaining momentum.

Asked if the result would kickstart his season, Vips said: “Yeah, I really like to hope so.

“it’s the race where everything has sort of gone my way.

“We’ve had some boring races in Monaco, races one and two, where everything went right but I couldn’t do much, but this was a proper good race and it’s I’d say pretty much the first one this year.

“So I think definitely gives me a lot of confidence and a big boost in the championship I think as well.”

He was also asked about his actions on the podium after he was seen quickly retreating from the traditional champagne spray.

He said: “Why waste the good stuff, eh?

“No, the actual reason is that we got my suit measurements wrong – not like two or three centimetres wrong, like 30cm wrong everywhere, so I just looked like the Michelin man, and I refused to wear that suit.

“So I got one more suit, this one, to see if the measurements are okay and they were, and they’re making the second one now, so yeah, it just hasn’t arrived yet, so I’m saving it for tomorrow.”

Vips starts in second for Sunday’s feature race behind Lawson.