Great anticipation surrounded the launch of Mercedes' W13 Formula 1 car on Friday, as observers were eager to see how the reigning champion team would interpret the revamped technical rules.

Sure enough, the car didn't disappoint. The W13 features a nose with a domed surface and round tip that reaches forward over the front wing and connects with the mainplane.

The nose tip also features a panel that will likely allow the team to exchange the smooth panel currently installed for one with an inlet to cool the drivers when temperatures increase.

The mainplane itself dips down in the central region around the nose, to help divert airflow under the body of the nose and onward towards the underfloor and sidepods.

PLUS: The intriguing Mercedes discrepancy keeping its F1 rivals guessing

It’s a four-element wing, as the team adopts the maximum pieces that the regulations permit, with the upper three elements of a shorter chord than the mainplane. Mercedes is also the most aggressive so far when it concerns the taper of the elements, which extend out from the nose into the loaded portion of the wing. 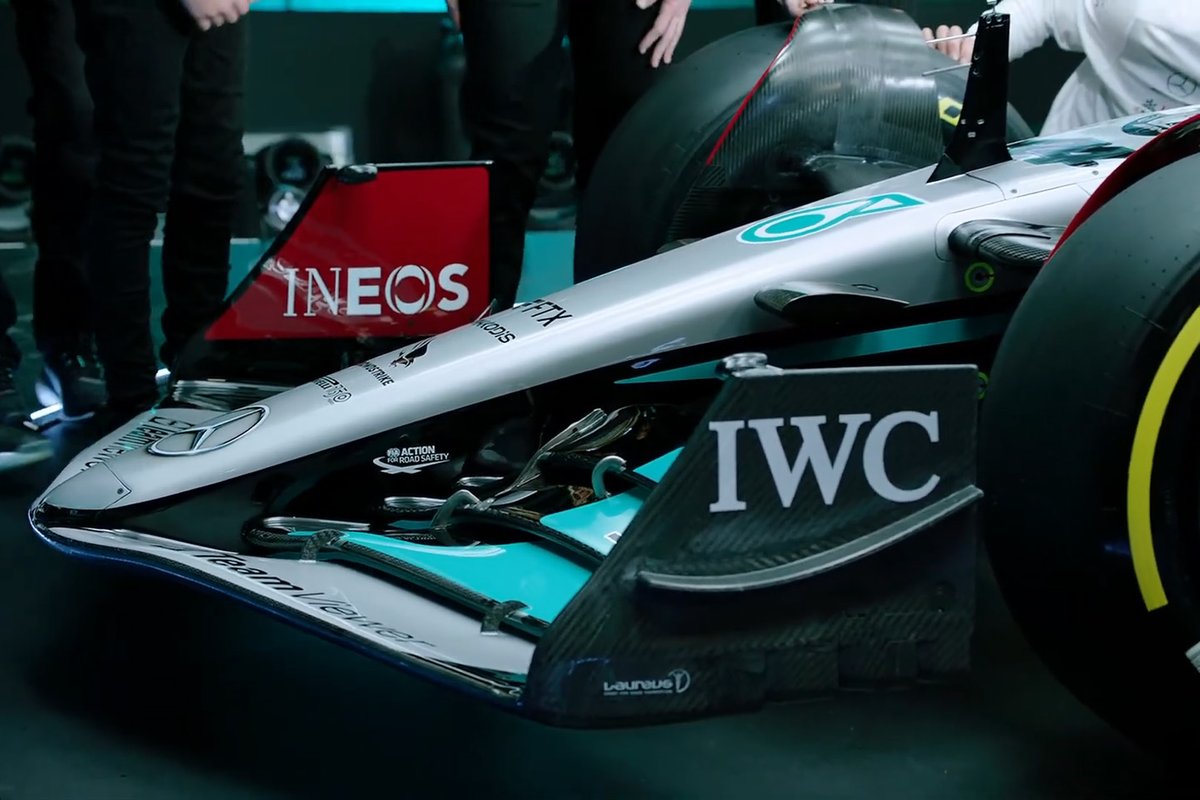 The adjustable sections of the wing, and the mechanism used to perform that function, have clearly been designed to maximize flow direction, given the regulations have taken away some of the tools that designers previously had to perform these duties.

The outer portion of the wing unloads as the regulations suggest it should. But it’s where the flaps connect to the endplate that the real action is, the team opting for a more squared off junction (red arrow). This manifests itself at the rear element, with elements stepped back from the endplate (blue arrow).

The endplate also has a more distinctive triangular leading edge than seen elsewhere, which results in a shorter top edge and a domineering diveplane. The designers have also opted to place their infrared tyre sensor on the upper front corner of the endplate, with aerodynamics clearly the decision behind its placement.

Mercedes has not opted for the snowplow or double splitter design used by others, but it has narrowed the front section of the bib considerably, taking on more of a wedge shape that will likely result in any vortices shed from it being altered in response. 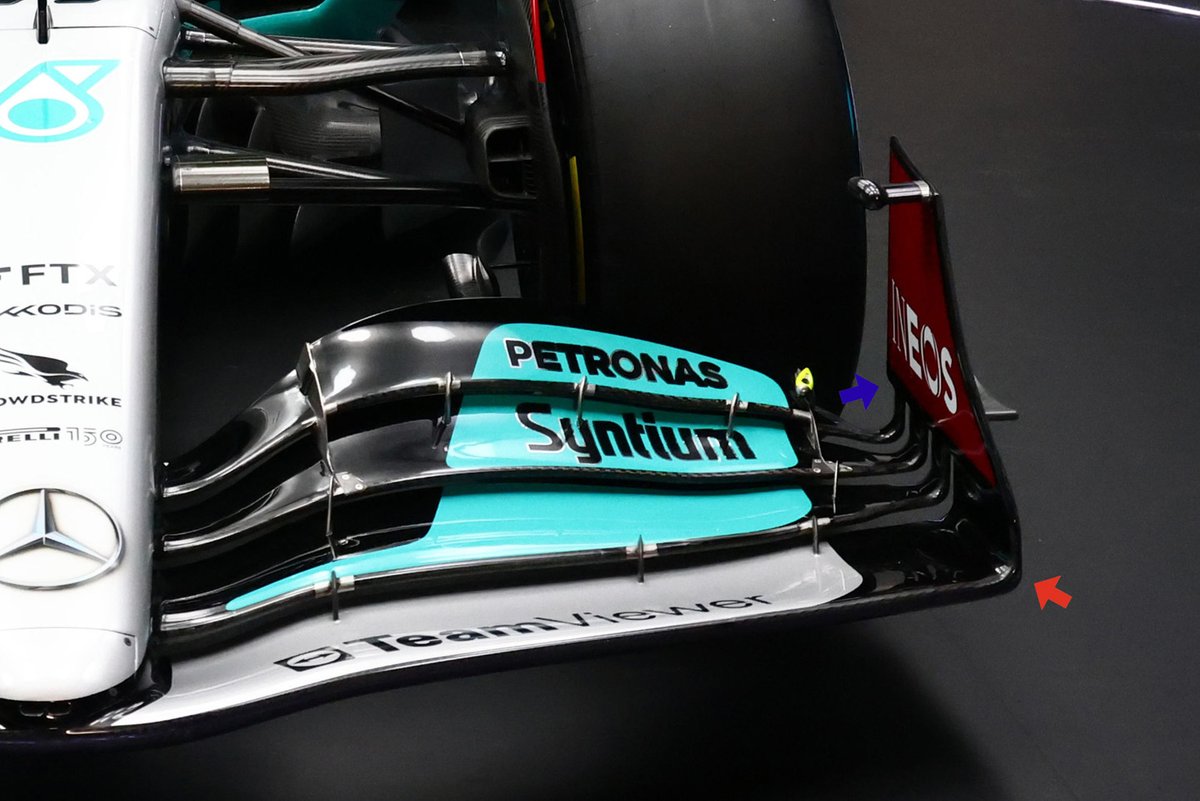 The floor features a full-width tunnel either side of the chassis, not the narrower, upper floor feeding solution seen on the McLaren and Alfa Romeo, with three crescent shaped strakes protruding from the tunnel's entrance.

Where it differentiates itself from those with the full-width variant we’ve already seen is the geometry of the leading edge and the strakes that protrude from it. The tunnel entrance is much higher alongside the chassis before it dips down quite steeply toward the edge wing, leaving a significant bluff surface.

The edge floor wing (red arrow) is short in terms of its length, and tall in the forward section, but abbreviates quickly in order to match the geometry of the floor as it tapers away.

This area of floor has also been carefully crafted in this region in order that the airflow follows a more defined route around the lower half of the sidepods. The W13 also features a solution first seen on the W12 last season and subsequently abandoned in Mercedes' Silverstone B-Spec upgrade package – the wavy edge. 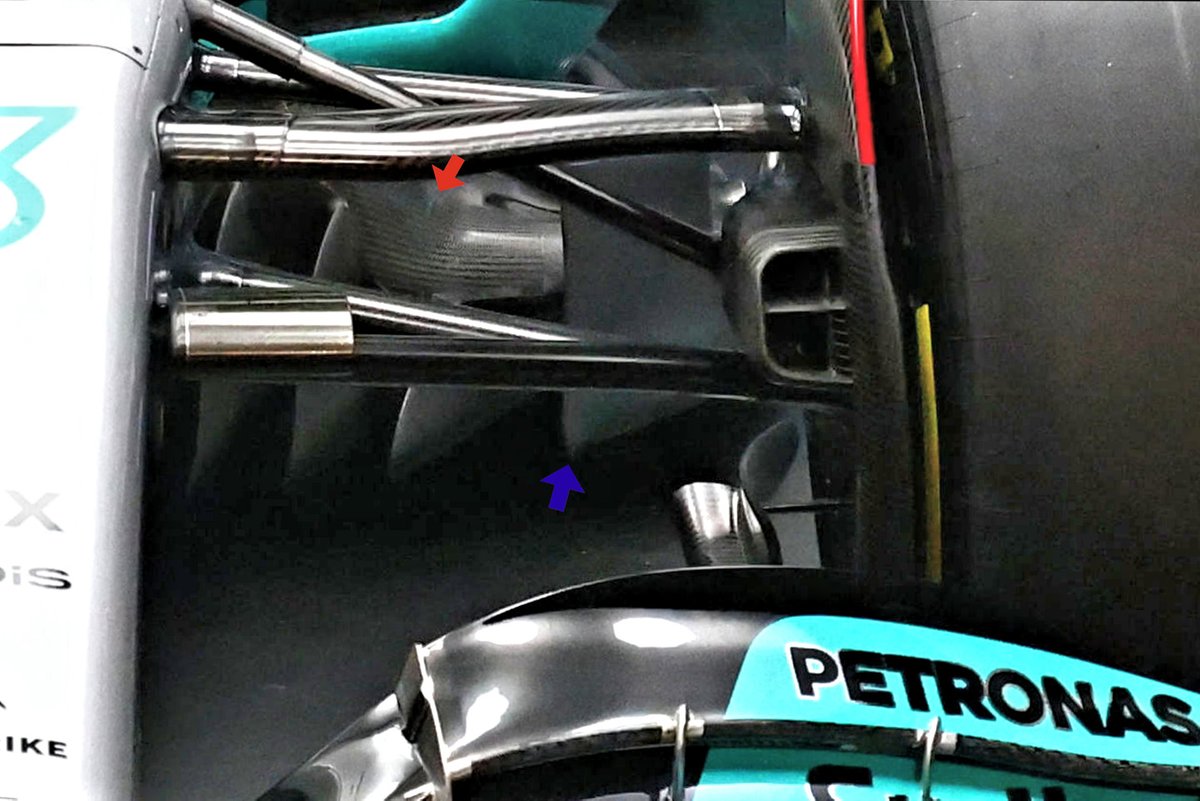 In terms of the W13’s variant we’re seeing smaller waves, or upturns, at the front that grow in size further downstream. As with the ones used on its predecessor, it’s expected that these direct flow outwards from under the floor to artificially increase the width of the floor, where ordinarily it would be disturbed by the front tyre wake being pushed under the floor.

PLUS: The F1 compromises Mercedes battled to make ‘monster diva’ W12 a winner

The overall design of the sidepod is a modified version of what the team has used for the last few seasons, with a narrow, tall inlet used as they accommodate the revised regulations regarding the SIPS (Side Impact Protection Spars). Unable to mount the upper spar as low as it has over the last few years, all of the teams have abandoned the high, shallow and wide inlet that Ferrari first introduced in 2017.

In the side view, the Mercedes sidepod tilts inwards at the most forward section. A multi-geometry surface has been created to both shrink wrap the internal components, while also offering a favourable aerodynamic performance.

The team has also designed a wing mirror stalk on the outer edge of the sidepod to create a long, outwardly-angled flow diverter that will work in combination with the high sidepod shoulder that also follows a similar geometry in order to try and push flow outboard.

The sidepods, as in the past, both taper down towards the floor but also undercut all the way to the rear of the car and the coke bottle region. There can be found a high waisted section and a very narrow cooling outlet, which is currently the only one on the car. This will likely increase in size, depending on the circuit, but might also be supplemented by the addition of cooling gills which the team has thus far opted not to deploy. 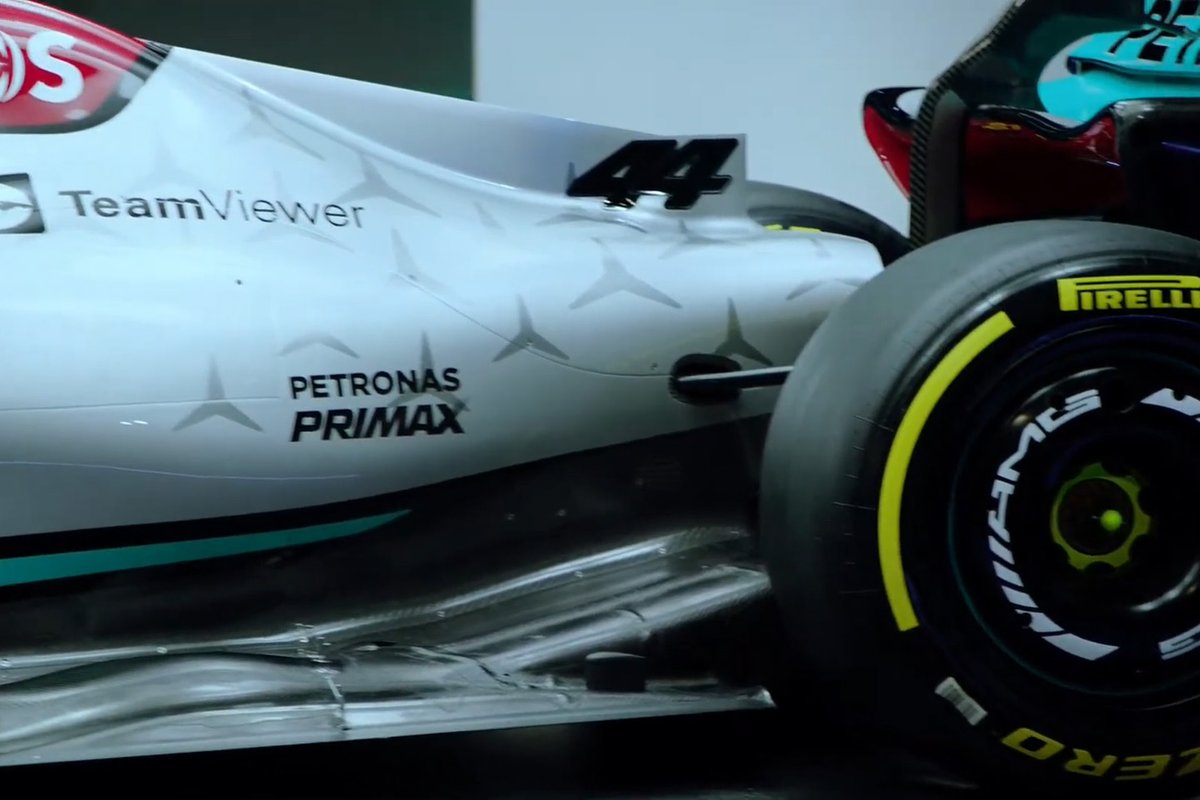 The inboard section of the floor features the double kick line design, as the team looks to improve the transition between the underfloor tunnels and the diffuser. In the lower outer section, the team has managed to find a way to incorporate a short flow diverting strake ahead of the rear tyre.

As anticipated, based upon the design seen on its engine customers Aston Martin and Williams, the W13 features a pullrod rear suspension layout.

PLUS: How the first real F1 2022 launch cars compare

The rear wing design differs from those seen elsewhere in other respects too. The Mercedes design team has opted for a W-shaped mainplane design that features an upturned leading edge in the central section. This is separated by a single mounted pillar, which is also conjoined with the DRS actuator pod. 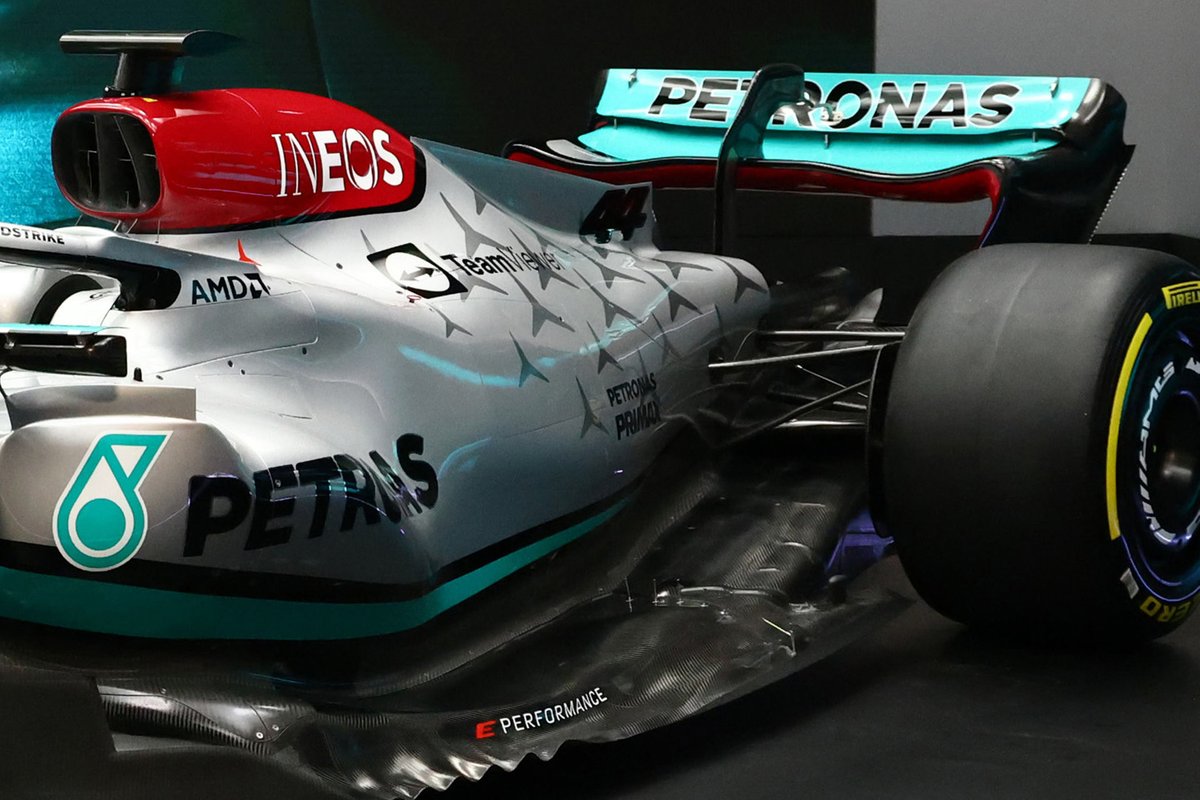 Michael Andretti applies to FIA to enter F1 team for 2024

The "rabbit hole" that F1 needed to stay out of