Verstappen hopes Mercedes "do me a favour" in Hungarian GP

Max Verstappen believes his Hungarian Grand Prix will be “a bit tough” from 10th on the grid, but hopes Mercedes “do me a favour” against Formula 1 title rival Ferrari.

An engine issue in Q3 prevented Verstappen from setting a fast lap time, resigning him to the fifth row for the start of Sunday’s race at the Hungaroring.

But chief title rival Charles Leclerc was not able to take full advantage, finishing only third in qualifying as George Russell scored a shock maiden pole position for Mercedes.

Asked if it was a nice surprise to see Russell on pole, Verstappen replied: “Well, they need to do me a favour tomorrow! That’s more important.”

“I was surprised to see it,” he added. “They were close, but I didn’t expect them to make that jump in Q3. It’s nice for me as well.”

Russell will be joined on the front row of the grid by Leclerc’s team-mate, Carlos Sainz, but the Ferrari drivers have already downplayed the possibility of using team orders to help Leclerc’s title hopes.

Verstappen had set the fastest time in Q2 before the engine issue resulted in a “painful” final session, and the Dutchman was “surprised” by his pace prior to the problem.

“All the guys and girls here and also back at the factory analysed a lot last night because we were not happy at all [after practice],” Verstappen said.

“We made some really positive changes, the car was a lot better to drive for me. We looked very competitive, even Q2, all the laps, even on a used tyre set, we were always there, very quick.

“I was looking forward to Q3, then of course the first lap didn’t go to plan. Then I knew the pace of the car is there. Unfortunately we couldn’t show it.” 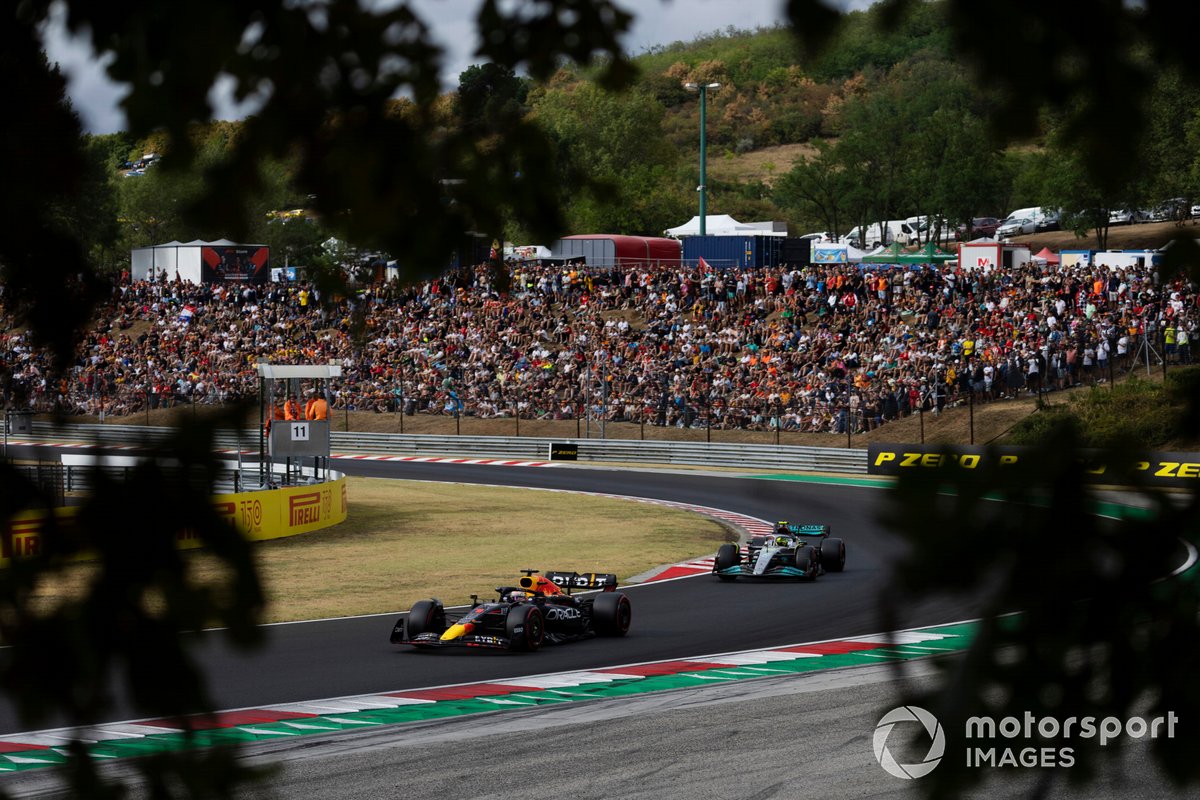 The Hungaroring is notoriously difficult for overtaking, leaving Verstappen braced for a hard race on Sunday as he tries to pick his way back up the order.

“It’s going to be a bit tough for me, but anything is possible,” Verstappen said.

“I think a lot of Sundays have shown that already this year, but around here it’s hard to pass.

Verstappen’s 63-point buffer means he will still head into the summer break with a healthy lead regardless of Sunday’s result, but said he was not giving thought to the advantage offered by his points lead.

“I don't even think about the points too much, just disappointed these things happen,” Verstappen said.

“There are always weekends sometimes where you’re not the quickest or whatever, it’s natural or normal.

“But we actually had a really quick car today, then you have to maximise it and be up there, even if it’s one, two, three, not P10.”