Fernando Alonso was quickest in opening United States Grand Prix practice, in a bizarre session delayed because of fog and then stopped due to problems with the medical helicopter

The Spanish Ferrari driver posted a best time of 1m38.343s to finish ahead of McLaren's Jenson Button and Valtteri Bottas in the Williams.

Esteban Gutierrez was fourth fastest for Sauber ahead of Mercedes' Nico Rosberg.

Formula 1 world champion Sebastian Vettel had a low-key start to the weekend, finishing down in 18th position.

The fog caused a delay of 40 minutes because the medical helicopter could not take off, meaning the session was shortened to just an hour rather than the scheduled 90 minutes.

Button was the first man to set a time and also the fastest driver for several minutes before the action came to a halt when practice was red-flagged because of "further problems with the medical helicopter", which, as was later revealed, was not on site.

The countdown clock was restarted with 45 minutes to go, but the action could not resume as the track was still closed as teams waited for the medical helicopter to land at the circuit.

Once the helicopter appeared on track, the action finally resumed with some 32 minutes on the clock. 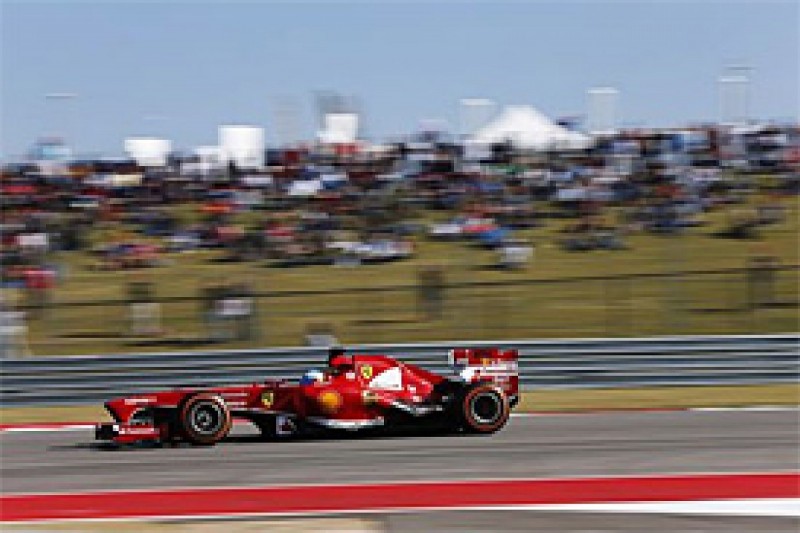 Alonso put his Ferrari on top quickly after the action continued, the Spaniard setting a laptime of 1m38.343s that would remain unbeaten.

Kimi Raikkonen's stand-in Heikki Kovalainen, one of the men who will have lamented the lack of running, finished in 13th position in the second Lotus.

Toro Rosso's Daniil Kvyat completed his first practice run for the team he will race for next year, the Russian posting the 17th quickest time, winding up right behind team-mate Daniel Ricciardo.

Local hero Alexander Rossi, in his first F1 outing in front of his home crowd, finished 19th for Caterham.

Marussia's third driver Rodolfo Gonzalez caused the only significant on-track incident when he stopped with an apparent problem with two minutes remaining.

Valsecchi expected to land Lotus drive after Hulkenberg declined it