Rosberg took a comfortable victory out front, while his team-mate Lewis Hamilton capitalised on a big pace advantage over Ferrari's Sebastian Vettel to use a three-stop strategy to jump ahead of the four-time world champion.

While Ferrari has regularly proved to be a thorn in Mercedes' side so far this season, Vettel finished the race 45 seconds adrift of Rosberg with a heavily updated SF15-T.

When asked if the gap back to Ferrari was a surprise, Rosberg said: "Yes because it was much more than we have seen in recent races.

"It's a big step in the right direction, a bit of a surprise, but it showed we have an awesome car at the moment.

"We won the development race this weekend so it is an important indication for the season."

SPAIN NOT THE FULL PICTURE - VETTEL

Third-place finisher Vettel dismissed claims that Mercedes has taken a big step forward over Ferrari, suggesting the increased gap was more likely down to the Barcelona track or conditions this weekend.

"I don't think this is the reality," Vettel said when asked if Ferrari had lost ground.

"If you take the average from the first five races then you have the reality.

"You have to be fair, and some tracks we will be more competitive than others. 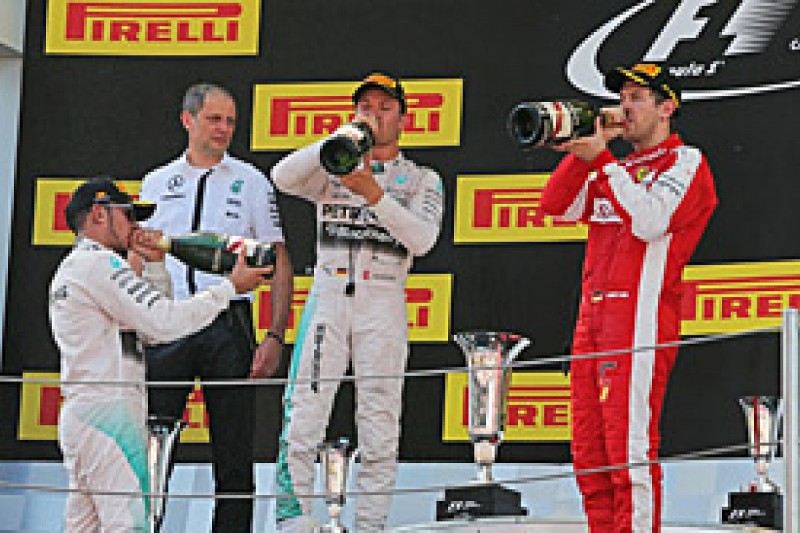 "We are not happy with the gap - for some reason, we are not competitive here even though we have improved our car."

Vettel admitted that Ferrari knew it did not have the pace to keep Hamilton at bay for the whole race, and that only the world champion's slow first pitstop made the Italian team decide to cover him off strategically at that stage.

"I thought it would be tricky to keep him behind - they were a fair amount quicker at the end," Vettel added.

"We were a bit lucky at the first stop, Lewis had a problem so we reacted well and managed to stay ahead.

"When he pitted early to go to three stops, our best chance was to stay out.

"With the speed Mercedes have it's fair to stay they deserved to be in front.

"We've had some updates which have worked well, and I'm confident in the next couple of races we should be stepping up our game again."