Max Verstappen says he can already feel a "big difference" with Red Bull's 2018 Formula 1 car, even though he has yet to unleash its full potential

Having started pre-season testing last year on the back foot, Red Bull has been more encouraged by its start this time around after Daniel Ricciardo topped the opening day.

Although Verstappen endured a tricky final day of running on Thursday - which included an incident that caused a red flag - he says he has seen enough to feel bullish about the RB14.

"It's a big difference, the way the car is handling, and I think it's in a positive way," he said.

"We didn't do any performance laps but when you have conditions like this, which are not ideal, it's good to make sure everything is working well in terms of the data you get from the car compared to what is happening in the windtunnel."

A windtunnel correlation problem hindered Red Bull in the early stages of last season, and resolving that was seen as key to its recovery.

Verstappen played down his ninth position in the results, 2.7 seconds off pacesetter Lewis Hamilton.

"This track with the new surface, it takes a long time until you get a lap time out of it. We have only done runs of two laps.

"I'm not too worried yet. You know Mercedes and Ferrari are going to be strong anyway. I'm quite happy with the car so far. In the second week maybe we'll show a bit more." 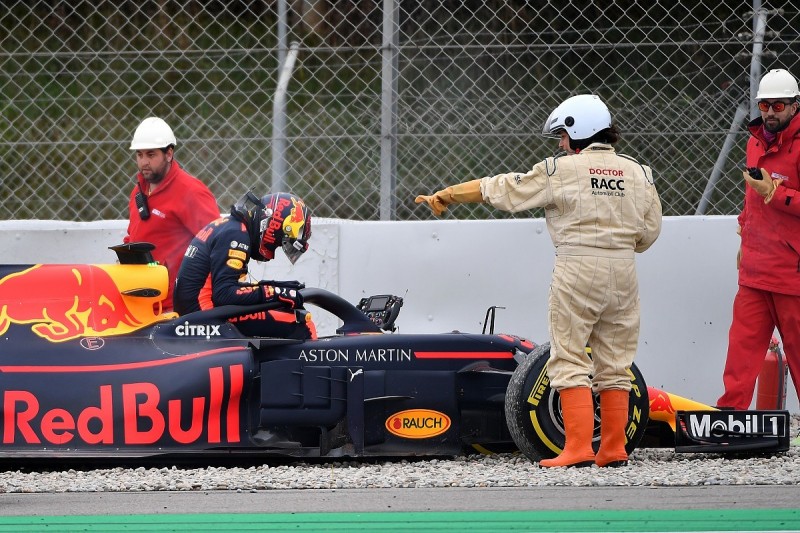 As well as losing time with his off because he suffered a gearbox glitch as he tried to reverse out of the gravel, Verstappen was earlier hit by a fuel leak - Red Bull's second of the week - that led to some downtime in the garage.

He completed just 35 laps on Thursday compared to Pierre Gasly's benchmark 147, but said that was partly a deliberate decision due to the morning rain.

"We didn't want to run when it was that wet. It didn't make sense for us," Verstappen said.

"When the track was drying out, we went out on the intermediates. Everything seemed to work well. We did our own programme, just checking the car on the slick tyres on very short runs.

"When we wanted to go for longer runs, we had a little hiccup, we had a leak, so we were just checking the whole car. It took longer than expected.

"Once we went out again. I had a moment at Turn 12, then reversing, something happened with the gearbox, but those things happen. Anyway, the conditions this week were not great."