Hulkenberg equalled his best result of the season in the British GP two weeks ago when he finished in sixth place, but his car was found to need an unscheduled gearbox change afterwards.

Renault found damage in the gearbox ahead of the Hungaroring race and informed the FIA of the change on Wednesday.

The gearbox replacement will translate into a five-place grid penalty in Hungary as the previous unit was not used for the mandatory six consecutive races.

Hulkenberg was seventh in Friday practice at the Hungaroring. 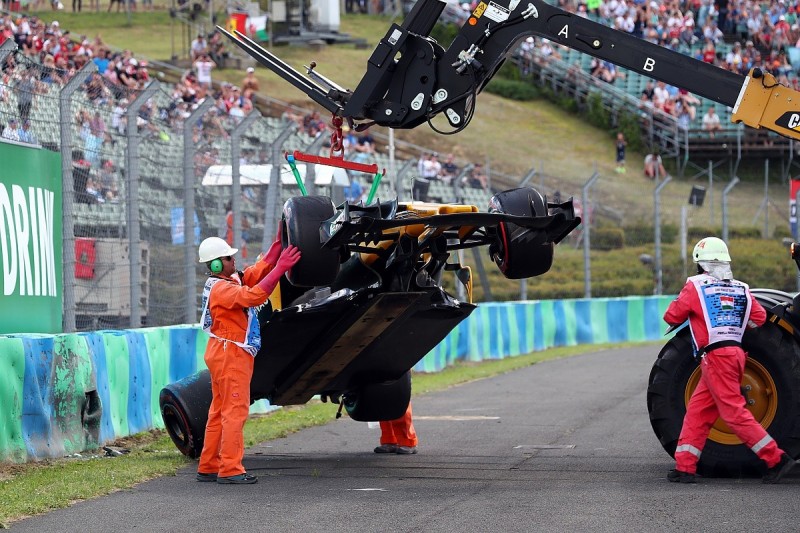 Hulkenberg's team-mate Jolyon Palmer crashed out of second practice and said driving his car was "like rallycross" until that point.

Palmer spun into the barriers after losing the rear end on the entry to final corner.

He corrected the initial slide but then speared off as the car swapped ends, damaging the right-rear.

Palmer had to drive without the new floor fitted, after his was damaged - and his front wing torn off - when he ran wide at the fast Turn 4 kink in first practice and tried to rejoin over the exit kerbs.

"Something wasn't working since the beginning of the session," he insisted. "We don't know what still.

"It was threatening to do that [spin] many times and we couldn't see what, but it was like rallycross out there.

"In the end I felt like something broke. It went and I had zero choice to catch it.

"At the moment we see nothing [in the data], just bad balance from the off."

Renault will change the rear suspension on Palmer's car as well as the gearbox, which would have been replaced anyway as standard post-practice procedure.

Technical director Nick Chester confirmed the floor that was damaged in the morning would be repaired and refitted on Saturday.