Rosberg took the lead when polesitter Hamilton bogged down at the start and remained unthreatened throughout the 53-lap race to cross the line 15 seconds ahead for Mercedes' fourth one-two of the season.

It means Rosberg, who secured his seventh win of the season and 21st of his career, now trails Hamilton by just two points in the drivers' championship with seven races remaining.

Sebastian Vettel gave the Tifosi something to cheer about by finishing third, 20.9s adrift, with Ferrari team-mate Kimi Raikkonen fourth.

While Hamilton was swallowed up by the pack and dropped to sixth at the start, Rosberg held off a challenge from Vettel to take the lead into Turn 1.

The Mercedes driver set a series of fastest laps to build a gap as Vettel and Raikkonen struggled to keep pace.

Hamilton, meanwhile, passed Daniel Ricciardo through Curve Grande to move into fifth and then got a good run out of Parabolica to slingshot past Valtteri Bottas for fourth.

The reigning world champion inherited second when the Ferraris pitted for fresh sets of super-soft tyres. 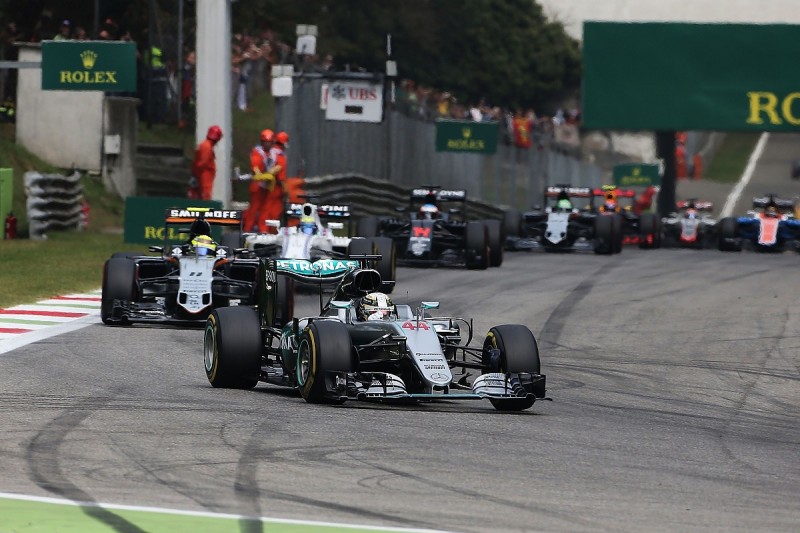 Hamilton began closing the gap to Rosberg before both Mercedes pitted for the first and only time, taking the mediums.

He dropped back to fourth but reclaimed second when the Ferraris pitted for the second time.

Though Hamilton pushed to catch his title rival, he locked up at the first chicane, bouncing across the speed bumps in the middle before rejoining.

He was then warned by his team to build a gap to the Ferraris behind and his challenge faded.

Ricciardo, on fresh super-soft tyres, launched an attack from a long way back to pass Bottas into the first chicane to take fifth.

Max Verstappen got a good run through Curva Grande and then passed Sergio Perez into the second chicane for seventh.

The result means Williams moves back ahead of Force India into fourth place in the constructors' championship with a three-point lead.

In a race of little incident, Jolyon Palmer and Felipe Nasr collided on lap two with the Sauber driver being handed a 10s penalty by the stewards. Both retired with damage.