Mercedes has gone from fighting a rearguard action against a faster Ferrari to take charge of the 2018 Formula 1 season. These technical changes have been key to that swing

Understanding, unlocking and managing tyre performance has always been an artform in modern Formula 1 and can often make a big difference in the performance between teams.

It's a topic that's been central to Mercedes quest for improvement ever since it revived its works team for 2010.

The current champion squad has been through phases of struggling hugely with rear-tyre overheating, but also spells of being completely in command of tyre management.

Even during its dominant recent spell it has particularly struggled to stay on top of the tyre situation at slower street circuits - with its design concept better able to stretch its legs at high-speed medium downforce venues.

Knowing that there was an area of weakness that needed addressing, Mercedes has focused a lot of effort on tyre management, and and judging by its success in Singapore and Russia it has succeeded.

As has been discussed before, the introduction of the finned rear wheel design at Spa, coupled with a new rear brake drum design, plus a change in mindset on how to set up and operate its suspension has turned the W09 into a great all-round machine, knocking Ferrari's SF71H off a perch it had seemed to occupy.

But Mercedes' development appetite in other areas of the car has not stopped either - as the team further optimised its front wing package for Sochi, along with a revised rear wing support pillar layout.

The front wing had clear changes in the area alongside the endplate, which is interesting given both alterations have an impact on the amount and strength of outwash being generated.

It's altogether plausible that Mercedes encountered these gains while studying the reduced outwash effect that will be possible due to the regulation change next season. 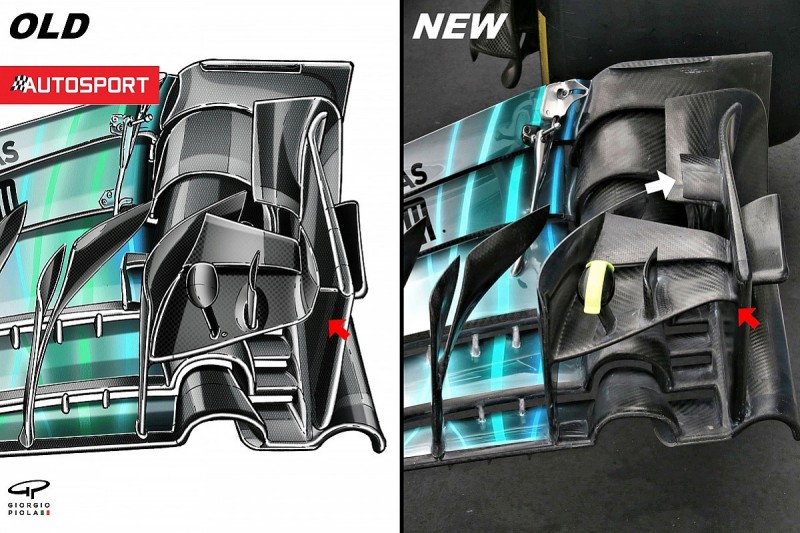 The front wing's main cascade element, which was previously stood adrift of the endplate, now lines up against it, but in a higher position. A pair of canards can be found in behind, exploiting any flow that can be picked up from under the raised cascade position.

The slots found in the outer 100mm of floor have become an area where teams have made the most changes and gains this season, and Mercedes' latest update resulted in the forwardmost slot being reworked.

The slot in the sidepod deflector bodywork has been adjusted as a consequence too, in order to fulfil the necessary regulatory obligation.

The Russian GP also set the stage for tests of a new Mercedes rear wing, which utilises a pair of supports rather than just one that intersects the exhaust pipe.

It's a design choice that its closest rivals have utilised all season and also features the swan-neck style upper connections to the mainplane, which improves flow to the underside of the wing. 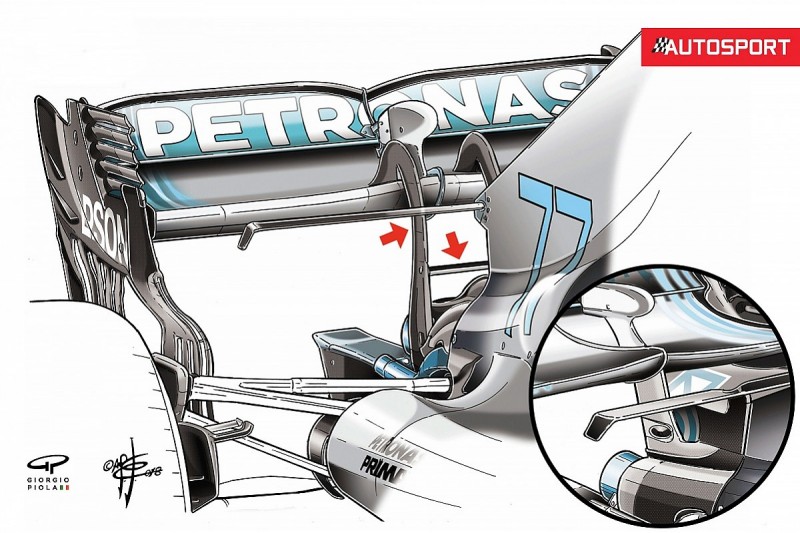 Mounted between the two pillars, which are much thinner than their single predecessor, is a new winglet, used to manipulate the direction of the surrounding airflow, shaping the exhaust plume, which would hopefully yield yet more performance.

The team chose not to race the design in the end though, instead opting for its lower downforce spoon shaped rear wing with the plainer, more complementary endplates.

Something that was retained was a change in position for the oil breather pipework, now sited alongside the crash structure and exiting just beneath the main exhaust outlet.

This might not seem like a considerable change at first glance but it could be Mercedes' first salvo in addressing an issue caused by a need to vent oil vapour generated by the engine to the atmosphere.

Ferrari-powered teams have been venting their oil vapour through pipework that exits out of the crash structure, above the rain light, all season.

While that may seem innocuous at first sight, F1 teams do not do things for no reason. In fact it's a relatively old trick, one that predates the type of PCV systems we have on road cars, whereby a 'road draft tube' would be placed in the car's slipstream in order to pull the gases out of the crankcase.

If we use this logic to explain the pipe's use on the Ferrari powered cars and Mercedes W09, we can see that they are respectively using the diffuser and exhaust to take the gases from the pipework, thereby improving power unit efficiency. 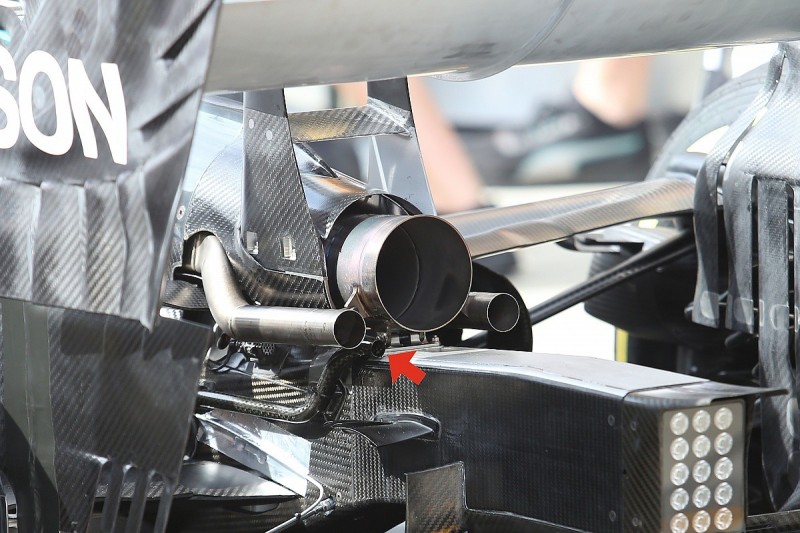