The Brazilian, who will retire after his 250th GP Abu Dhabi in a fortnight, was running 13th when he lost control approaching the final corner and crashed into the barrier, coming to a stop at the pit exit.

He then climbed out of his Williams and broke down in tears on hearing the support from the packed grandstands, draping a Brazilian flag around his shoulders and waving to the crowd.

"It was heartbreaking," Massa told Autosport. "I didn't want it to finish like this.

"I wanted to finish with a good result for the fans, for Brazil, for my team, for me.

"I just got in the corner and suddenly I aquaplaned, I was sliding and I couldn't stop the car.

"When I hit the wall, it just pushed me to the inside and maybe the suspension broke and then I had another big crash on the other side.

"Maybe God knows what to do, to stop me in the place to be in front of my fans.

"I had an amazing feeling with the fans and I couldn't stop crying." 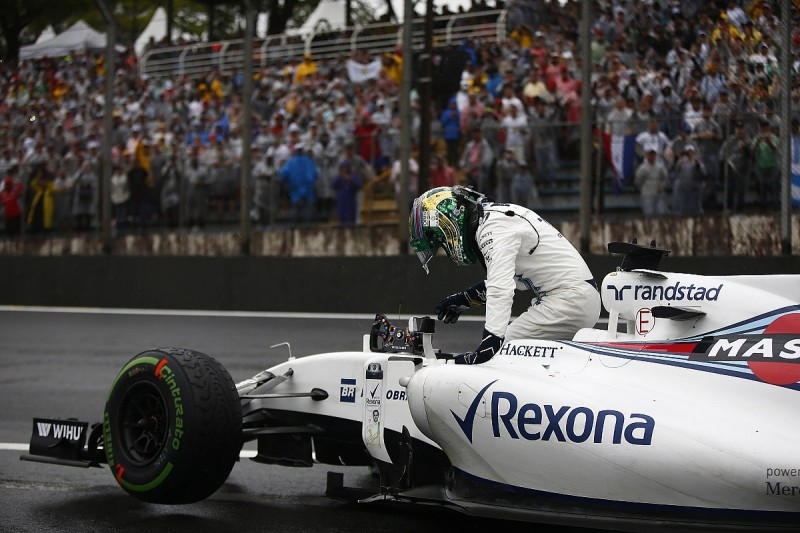 When Massa reached the pitlane, Mercedes and Ferrari mechanics came out of their respective garages and applauded him as he walked past before he was met by his family.

"I didn't imagine the reaction in the pitlane," he said. "Teams I didn't even work for like Mercedes, it was very human the reaction.

"I had so much love from the people, from other teams clapping their hands for me.

"It's a day that will be impossible to forget and an amazing feeling.

"I don't think I deserve so much like this."

Massa said he now planned to head back home to Monaco before flying out to Abu Dhabi for his final F1 race.

"I will try to enjoy my last race as best as I can," he said.

"Hopefully I can get a podium or a great result."