Felipe Nasr says finishing ninth in the Brazilian Grand Prix, to lift Sauber above Manor in the Formula 1 constructors' championship, "tastes like a victory"

Sauber seemed set to end an F1 season last in the championship for the first time in its history, having failed to score across the first 19 races of this season, while Manor lay 10th in the standings after scoring a point in July's Austrian GP.

But Nasr's drive from the last row of the grid to ninth in a rain-hit race at Interlagos has reversed his team's fortunes, as Manor's Esteban Ocon fell out of the top 10 on the penultimate lap after getting overtaken by Fernando Alonso's McLaren.

"For us, it tastes like a victory," said Nasr.

"Having a car that was super-difficult to drive, in terms of [pure] performance it would have been impossible to be in the points, but in conditions like this, the opportunity when it comes you have to be there to take it.

"I never lost confidence in the team, I always had the faith that we could have done it and we all deserve it.

"After such a difficult year, these two points mean a lot."

The Brazilian rose rapidly to ninth in the early stages of his home race, by staying out on extreme Pirelli wets as other midfield runners pitted for intermediates. 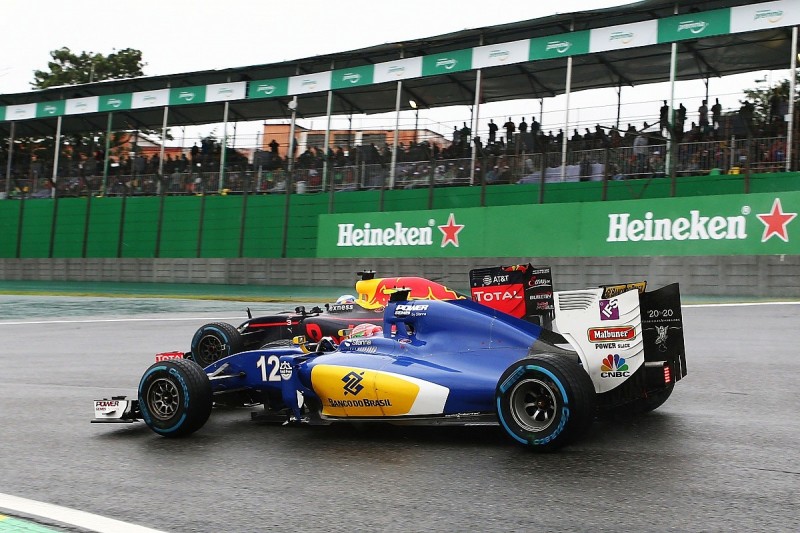 He got up as high as sixth mid-race, by avoiding pitting for new rubber in racing conditions, but slipped back in the later stages as faster cars recovered lost ground.

He was overtaken by Sebastian Vettel's Ferrari, the Red Bulls of Max Verstappen and Daniel Ricciardo, and Nico Hulkenberg's Force India, but held on against a late charge from Alonso and the Williams of Valtteri Bottas.

"When the conditions were very heavy I was able to pull away from some quicker cars, but as soon as the track dried a little bit the cars like Ferrari and the Red Bulls, I couldn't keep them behind," Nasr explained.

"The Force India as well passed flying - they were much, much quicker.

"I kept my tyres from the restart to the end, so I guess towards the end I was losing the rear tyres, but it was a matter of keeping the car on the track.

"My car was aquaplaning on both the main straight and the back straight, and you couldn't see anything with the spray.

"Alonso was coming very quick, I think in another two laps he would have taken me."