Verstappen finished third in atrocious wet conditions at Interlagos, behind a Mercedes one-two spearheaded by Lewis Hamilton, who kept his title hopes alive by beating team-mate Nico Rosberg to victory.

He also survived a huge high-speed slide on the main straight while running ahead of Rosberg in second, and charged through the field from 16th to third over the final 17 laps, after making a late pitstop for fresh wet tyres.

When asked to sum up the 19-year-old's race, Wolff said: "The Verstappen show! It was really unbelievable driving, great entertainment. Physics are being redefined."

Verstappen found grip and chose lines for his moves, often around the outside of rivals, which defied the tricky conditions.

"They don't get much better than that," he said. "The conditions were tricky all afternoon, but once the race got underway he quickly moved past Kimi, a very decisive move into Turn 1, and you could see from that point he meant business.

"At the next restart there was a fairly audacious move on Nico around the outside of Turn 3 - that was really just the start of things to come." 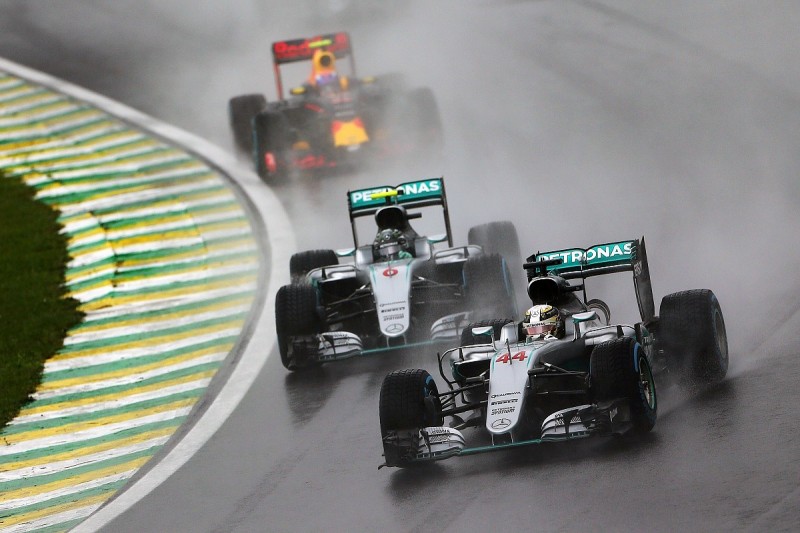 Verstappen ran as high as second until lap 42 of 71, before Red Bull gambled on fitting intermediates in hope of pressuring Mercedes as the circuit began to dry.

"After the [first] restart it looked like the intermediate tyres were the tyre to be on - we've seen so many times once you generate a bit of heat in them they are much quicker," explained Horner.

"We elected to put Daniel [Ricciardo] on them initially, and immediately he started setting purple sectors, went second quickest out of anybody on track, which prompted us to take the risk and go for the change with Max."

But the rain intensified later, forcing Verstappen back into the pits to switch to full wets again on lap 54, which meant he had to make up 13 places over the final 17 laps to finish on the podium.

"After another safety car we had the difficult decision to make to sacrifice track position versus going on to the safer tyre.

"After discussing with Max we decided to go on to the extreme, and it was really all over to him for those final 16 laps.

"He drove an incredible race, losing very little time in each of the passing moves he made.

"To be able to finish the grand prix in third demonstrated what a great talent he is. Max was in a league of his own today."