Daniel Ricciardo set the fastest ever lap of Barcelona on Wednesday with the RB14, a 1m18.047s on hypersoft tyres.

He was almost 0.4 seconds ahead of Lewis Hamilton, who used ultrasofts on his quickest lap, and covered an impressive 165 laps.

"I think there's three quick teams and there's no doubt that Red Bull are going to be people that we're going to be fighting with this year," Allison told Sky Sports News. "There's clearly no doubt about that.

"As winter testing goes on you get a better and better idea of where things stack up.

"Even now with two days left there's still some blurriness, so it's still not possible to say for sure if we've got our nose in front of them or they've got their nose in front of us, but you can say it's close."

Allison believes that there is more to come from Red Bull:

"I don't know what their engine plans are, but looking at what they've brought here, I'd say they've still got some bodywork to bolt on before Melbourne," he said.

"But no one really sandbags. There's no point in sandbagging. You're here to test.

"And you're only going to do a valid test if you find out what your car can do.

"The thing you can do to change the absolute pace is to have more or less fuel in the car, to have the engine turned up more or less depending on what particular test you're making with it. " 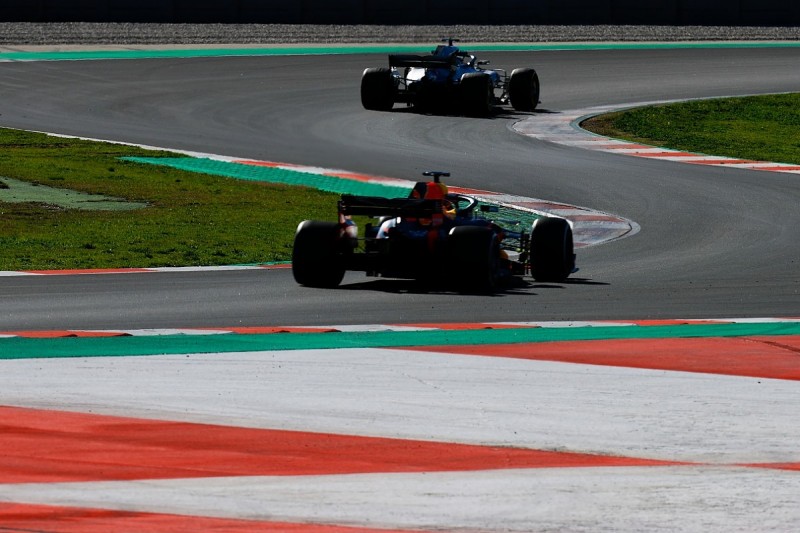 Ricciardo believes that Red Bull has closed the gap to Mercedes, although he admits he does not yet know how Ferrari fits in.

"Now it looks like we're close," he said. "I still don't really know where Ferrari is, I'm quite confident that Mercedes is just in front of us, but Ferrari I'm not sure. I think we're going to be a lot closer than last year.

"I'll do some homework tonight, try and have a look. At the same time I don't really spend too much time [on it], because in Melbourne I guess we'll find out.

"I think Mercedes do have a little bit on us, but I don't think it's too much. I don't think we're talking six or eight tenths, like it was this time last year.

"We seem to be close, and Ferrari I would guess are probably close, within our pace.

"I have a more positive than negative feeling for sure, it's on the right side of the spectrum where we need to be.

"If we produce the reliability and the pace we had particularly today I think we can fight towards the front."

He played down the fact that his record time had come on the softest tyre compound.

"It was on the hypersoft, but still we don't seem to be slow, and that's important," Ricciardo said.