Continuing the series celebrating 70 years of Formula 1, Autosport picks out the 12 moments that defined the 1990s, with the help of the extensive Motorsport Images archive 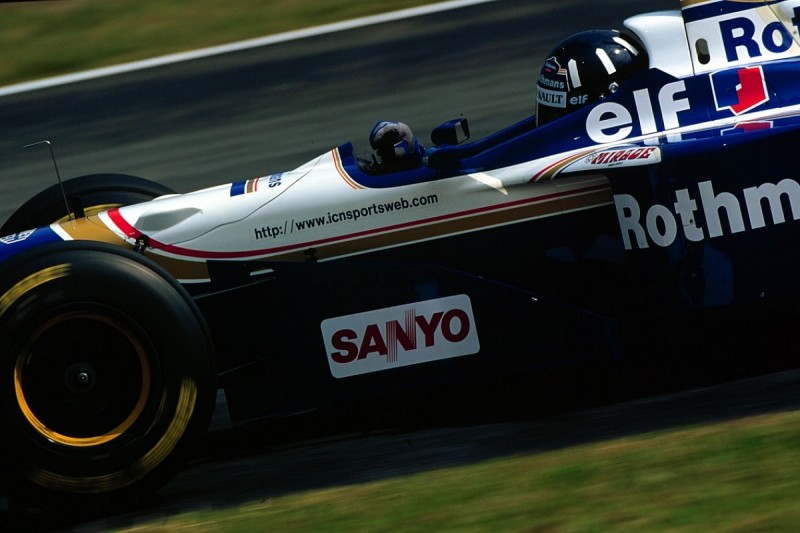 That was the 1990s, our latest stop-off point as we look through the defining moments of F1 history with the Motorsport Images archive.

Right in the middle of the decade came the most traumatic and acrimonious of seasons - 1994 featured the Imola tragedies, controversy over the legality of the Benetton, a two-race ban for Schumacher, and the title-settling shunt in Adelaide that gave the German his first F1 crown.

But the era also provided the feel-good stories of Damon Hill's 1996 title and Hakkinen's rise following a serious shunt at Adelaide in 1995 to become arguably the fastest driver on the grid - and a double champion with a resurgent McLaren. 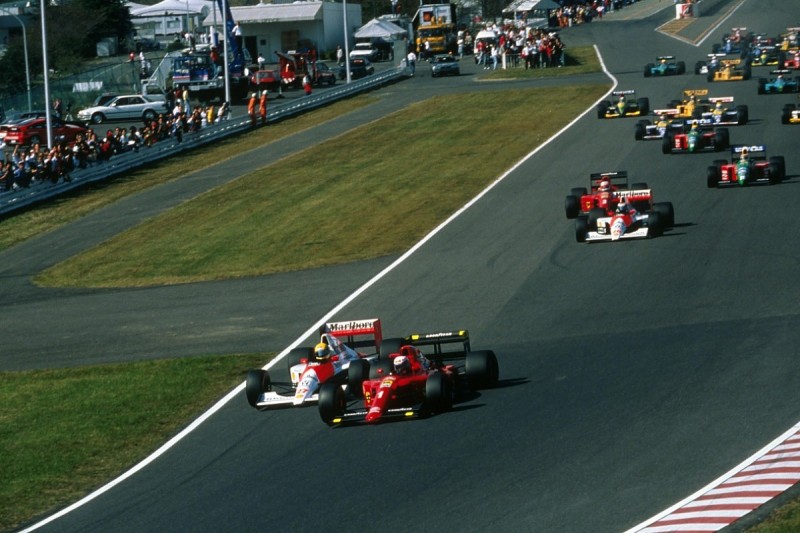 Collision ahead... One year after Prost causes the slowest-ever Formula 1 title-deciding collision, clinching the 1989 title over Senna, the Brazilian repays the compliment - again at Suzuka. But this shunt is fast and brutal.

Senna, who has taken pole in his McLaren-Honda, is furious that he can't choose which side of the track to start from. Prost, who has left the poisonous atmosphere at McLaren to join Ferrari, gets the better start, but Senna rams him off the road into Turn 1 to be crowned 1990 champion.

Piquet, fifth in shot, wins the race in his Benetton-Ford.

PLUS: How F1's most famous bitter feud was healed 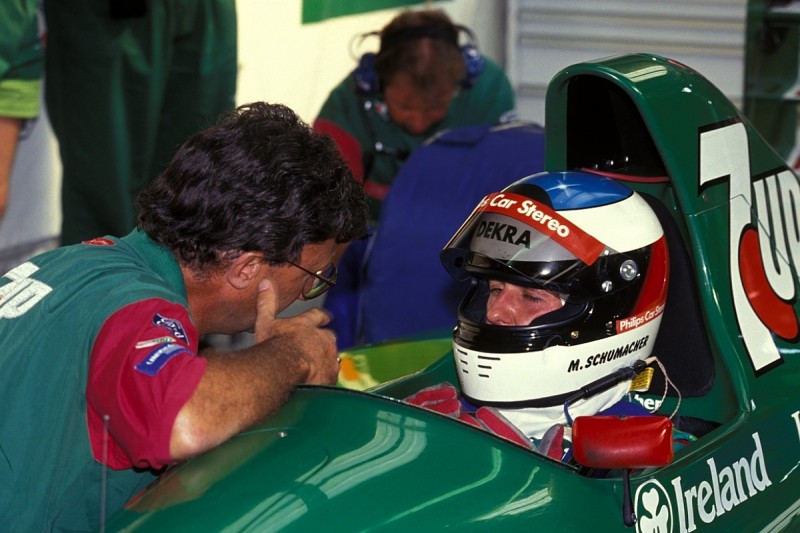 "Listen to me, kid." Team boss Eddie Jordan gives Schumacher some tips prior to the Mercedes protege's F1 debut in the 1991 Belgian Grand Prix. He has been called up by the Jordan team to replace Bertrand Gachot, imprisoned for assaulting a taxi driver in London, alongside Andrea de Cesaris.

Schumacher stuns by qualifying seventh at Spa, equalling the best to date of the team's rookie season. He retires on the first lap with clutch failure, but is in a Benetton for the next race at Monza, and the rest is history. 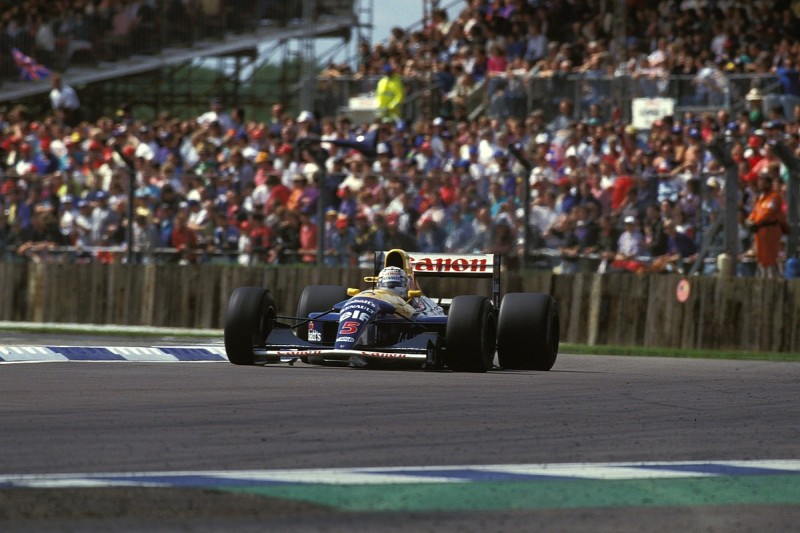 With the wooden sleepers and the packed, sun-baked crowd, there's still a touch of the delightful old-school Silverstone feel in this shot of Mansell dominating the 1992 British Grand Prix.

The Adrian Newey-designed Williams-Renault FW14B, with its active suspension, is the perfect tool for the famously brawny and brave Mansell to strut his stuff, and he wins eight of the first 10 races in the most one-sided season since the Clark/Lotus era.

Mansell, for whom this is the fifth grand prix win on home turf, clinches the title with five rounds to go, and scores almost double the points of runner-up Riccardo Patrese, his Williams team-mate.

PLUS: Tech secrets of a Formula 1 legend 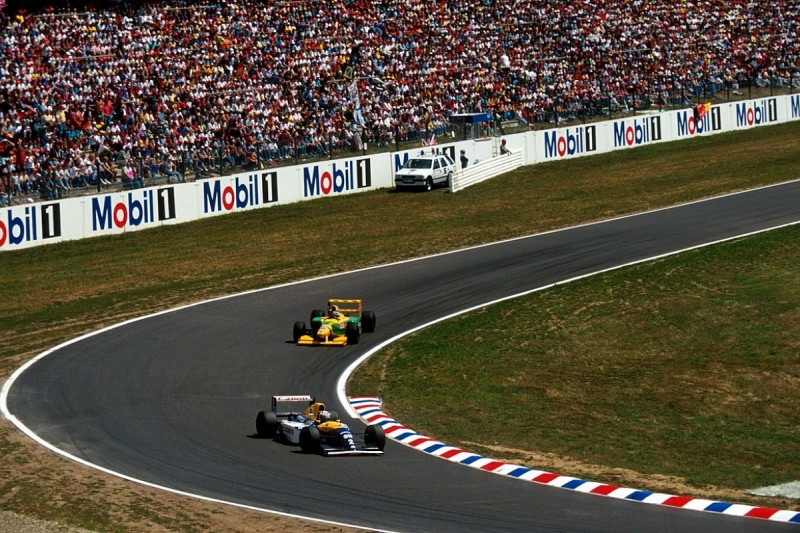 A true changing-of-the-guard moment in the 1993 German Grand Prix, in front of the crammed stadium grandstands.

After sitting out the 1992 season following his acrimonious split from Ferrari, Prost replaces the Indycar-bound Mansell as team leader at Williams-Renault. Here at Hockenheim, he leads the crowd's youthful new hero Schumacher on the way to the 51st and final win of his glittering career - although only after a late puncture robs Williams team-mate Hill.

Prost will clinch his fourth world title at the Italian GP, with three races to spare.

PLUS: Prost on fighting Senna, leaving Ferrari and more 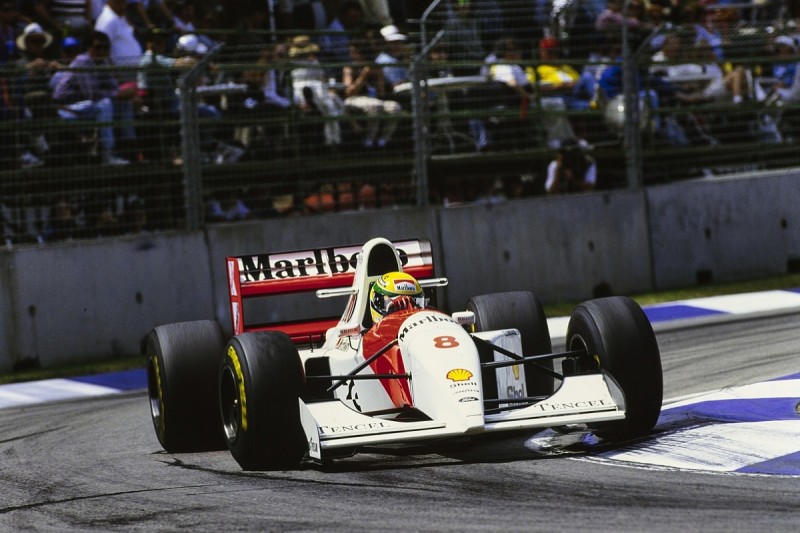 The last win for the maestro. Senna rides the kerbs on his way to victory in the 1993 Australian Grand Prix at Adelaide, his final race for McLaren before switching to Williams for 1994.

With Honda exiting F1 following the 1992 season, McLaren has been using Ford engines, with power way adrift of the all-conquering Renault units used by Williams. Therefore the best driver of his era has been thrilling F1 audiences as an underdog, with successes at his beloved Interlagos, Donington Park (one of his most famous wins), Monaco and Suzuka before arriving in Australia.

PLUS: How the Senna myth has been transformed 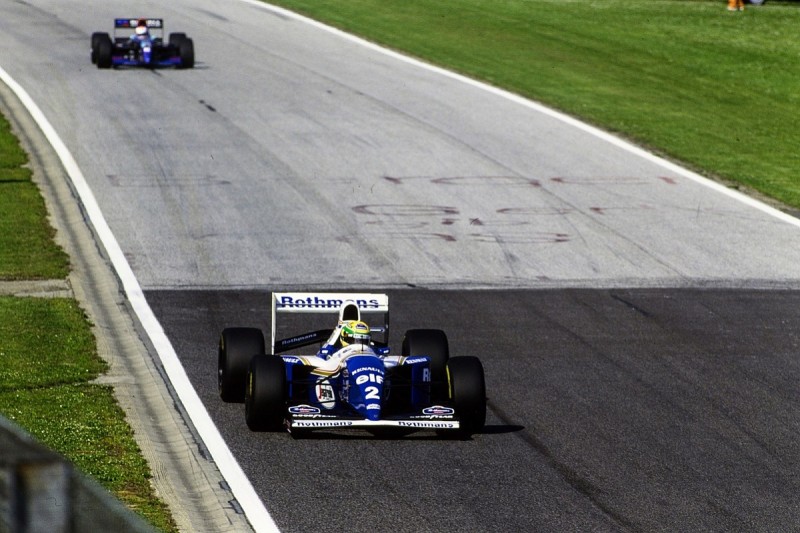 Tragedy at Imola. The Williams-Renault of Ayrton Senna leads the Simtek-Ford of Roland Ratzenberger early in the San Marino Grand Prix weekend. In qualifying on Saturday, Ratzenberger will crash fatally, the first F1 driver to do so since Elio de Angelis in 1986.

It shocks the motorsport world, Senna in particular, who has an Austrian flag stowed into his cockpit for the race with the intention of paying tribute to Ratzenberger if he wins.

Senna is leading Schumacher in the race when he crashes at the Tamburello curve. His death is announced later that afternoon, plunging the motorsport world - and his home nation Brazil - into mourning. 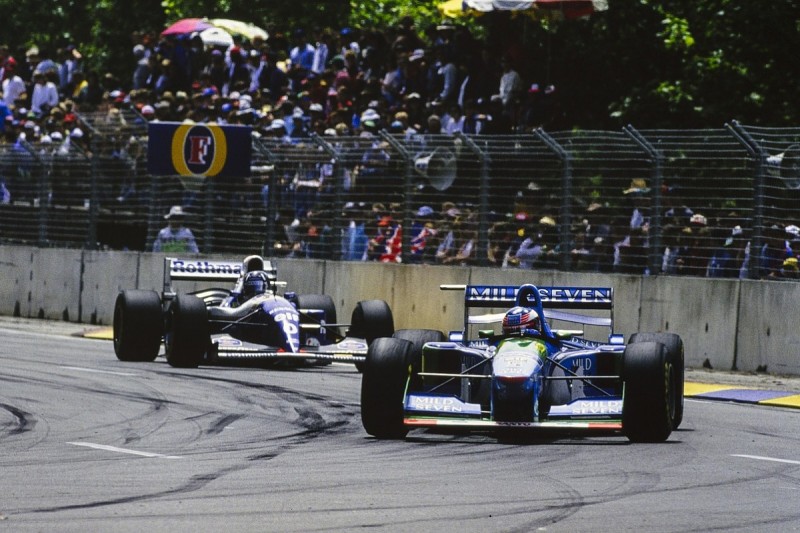 Trouble looms... An acrimonious 1994 season has boiled down to a winner-takes-all finale between Schumacher and Hill at the Australian Grand Prix. Despite exclusion from victory at Spa and from second at Silverstone, plus being banned from two races for his Silverstone offence, Schumacher arrives in Adelaide one point ahead of Hill, who is thrown into the limelight at Williams following Senna's death.

The Benetton driver's punishments seem to be draconian - his initial Silverstone 'offence' was jumping ahead of polesitter Hill on the parade lap, compounded by ignoring a black flag - yet come against a backdrop of suspicions, which can't be proved, that his team has been using traction control, which is banned.

Schumacher is leading in Adelaide on lap 36 when he clips a wall and damages his suspension. As Hill moves to slip past, Schumacher drives into him, putting both out of the race and securing the German his first world title. 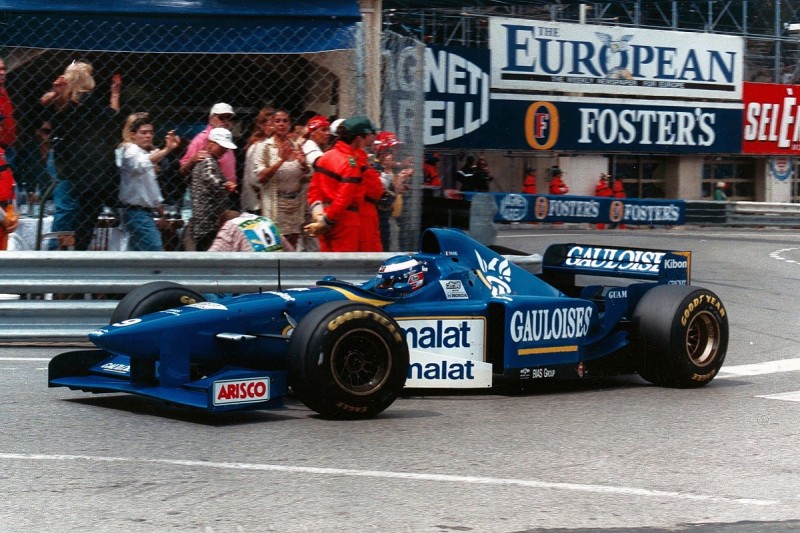 No world championship F1 race has had fewer finishers than the 1996 Monaco Grand Prix. That's in large part down to it beginning on a wet track, with just 16 of the 21 starters surviving the first lap. Still, no one can reckon on there being just three cars running when the chequered flag falls on the two-hour mark with 75 laps in the books.

Hill leads for Williams before his engine fails, then Jean Alesi takes over for Benetton until his suspension fails, handing the lead and victory to the Ligier-Mugen of Olivier Panis. Only David Coulthard (McLaren) and Johnny Herbert (Sauber) follow him under the flag.

PLUS: How Monaco 1996 typified a hard-charger's F1 career 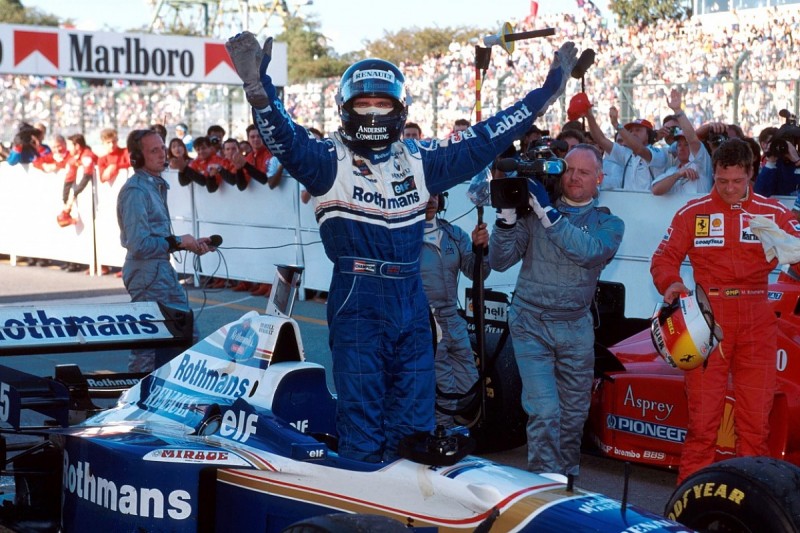 Hill celebrates at Suzuka after winning the 1996 Japanese Grand Prix, and settling the world championship in his favour over Williams-Renault team-mate Jacques Villeneuve. For Hill, it is redemption after his series of errors in 1995, which left Schumacher to claim a second successive title for Benetton.

The German has switched to Ferrari for 1996, but it's early days yet for the partnership. He is also in this shot, after finishing second to Hill in the Japanese GP to secure a distant third in the points.

PLUS: Damon Hill: The Long Interview 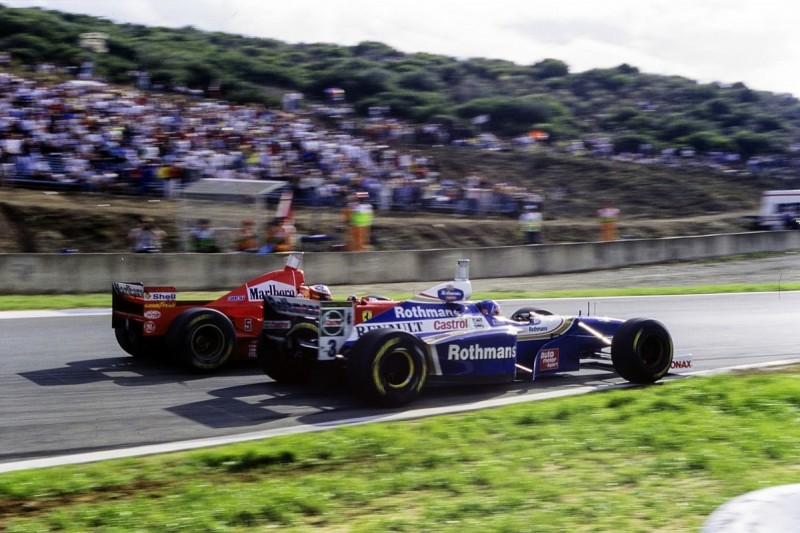 The fourth and final world championship to be settled by a 'professional foul' (see also 1989, 1990 and 1994) - except in this case Schumacher's crass driving is poorly executed.

The Ferrari driver is one point ahead of Villeneuve going into the final round of 1997, the European Grand Prix at Jerez. When Villeneuve attacks for the lead on lap 48, Schumacher - knowing defeat will cost him the crown - turns in on the Canadian in an apparent bid to take both out.

He fails, putting himself off the road as Villeneuve continues in front, before backing off to finish a title-winning third as Hakkinen wins his first Grand Prix. As punishment, Schumacher is excluded from the entire 1997 championship.

PLUS: Villeneuve: 1997 glory and the regrets that followed 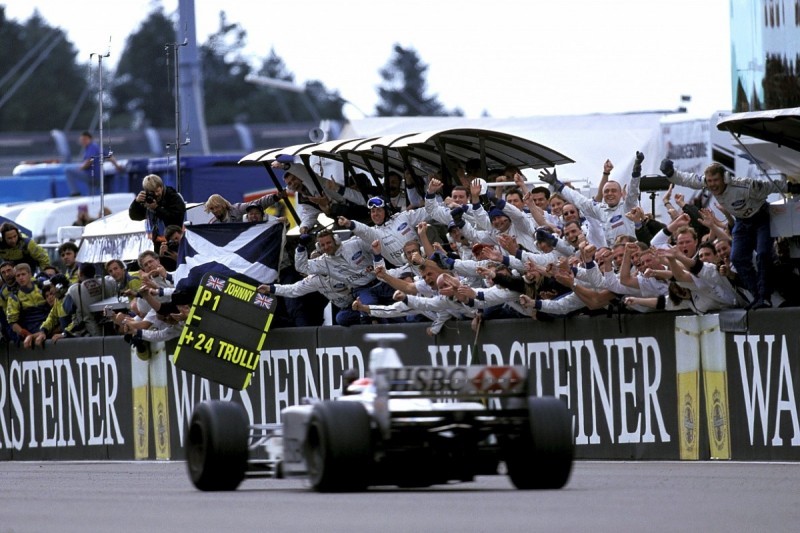 Little do we know it at the time, but this win for Johnny Herbert in the 1999 European Grand Prix at the Nurburgring will be the first of what now stands at 63 victories for the team that will become known as Red Bull.

Stewart, the team of three-time world champion Jackie Stewart and his racing son Paul, is coming to the end of its three-year stint in F1 in its initial guise, so this success for Herbert - which owes much to the wet-dry conditions that create an unpredictable race - is an emotional one.

The Milton Keynes squad is rebranded Jaguar for 2000 and mismanaged by corporate suits before Red Bull takes over in 2005. 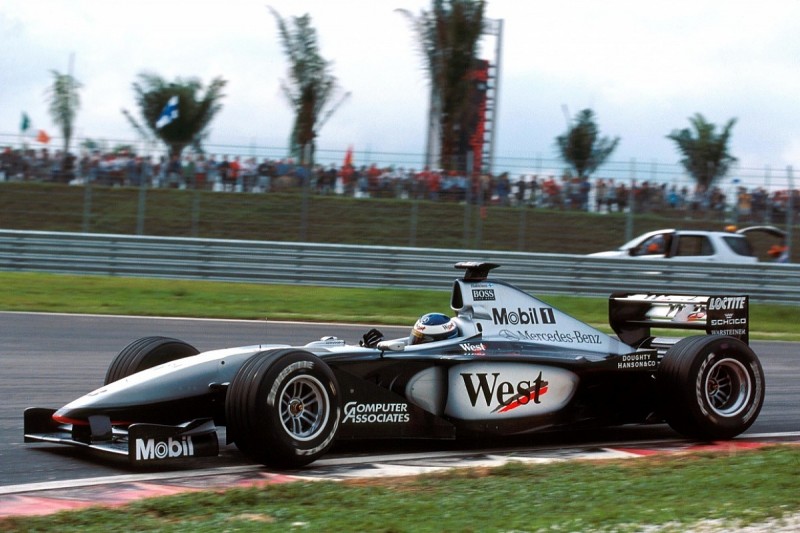 The Silver Arrows return. Well, sort of. Mercedes has been back in F1 since 1994, initially as an engine supplier to Sauber, before switching to McLaren in 1995. The team adopts silver hues when it swaps its traditional Marlboro backing for West in 1997, and Hakkinen wins the title in 1998 and 1999.

He is pictured here in 1999 in the inaugural world championship Malaysian Grand Prix at Sepang, the first of what will be many new F1 venues designed by German architect Hermann Tilke.

Eddie Irvine, thrust into Ferrari number one status following Schumacher's broken leg at the British GP, is handed victory by his returning team-mate to leapfrog Hakkinen and take the points lead, but the McLaren man will seal his second crown with victory in the Japanese finale.