Continuing the series celebrating 70 years of Formula 1, Autosport picks out the 10 moments that defined the 1970s, with the help of the extensive Motorsport Images archive

As we continue our look through the defining moments of Formula 1 history using the Motorsport Images archive, we arrive in the 1970s, which brought bumper fields, wide-open championships and plenty of controversy.

From the tragedies of the early years of the decade - including Jochen Rindt's posthumous crowning in 1970 - it ended with the beginnings of the rise of the turbocharged Renaults and the arrival of Williams as a force at the front.

In between, Jackie Stewart bade farewell after an extraordinary driving career, Niki Lauda made a Lazarus-like return from near-death to be crowned for the second time in 1977, James Hunt took a thrilling 1976 crown, while grands prix in Sweden were won by cars with six wheels and a fan at the back... 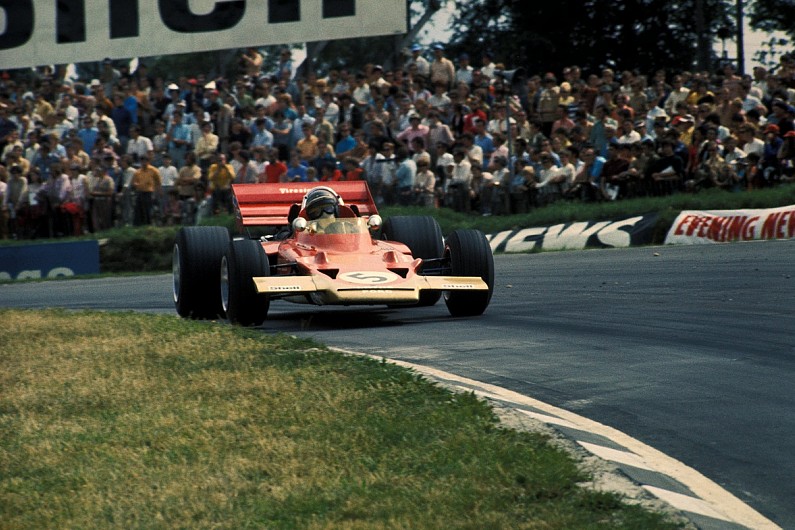 Rindt as he is best remembered, dancing the Lotus 72 on the limit.

He is pictured here at Clearways at Brands Hatch during the 1970 British Grand Prix, on the way to the fourth of his five victories that season.

That tally will give him an unassailable points advantage, but he'll never know that, because he crashes fatally at Monza in qualifying for the Italian Grand Prix.

Despite the superb late-season form of Jacky Ickx and Ferrari, Rindt will be honoured as the sport's only posthumous world champion. 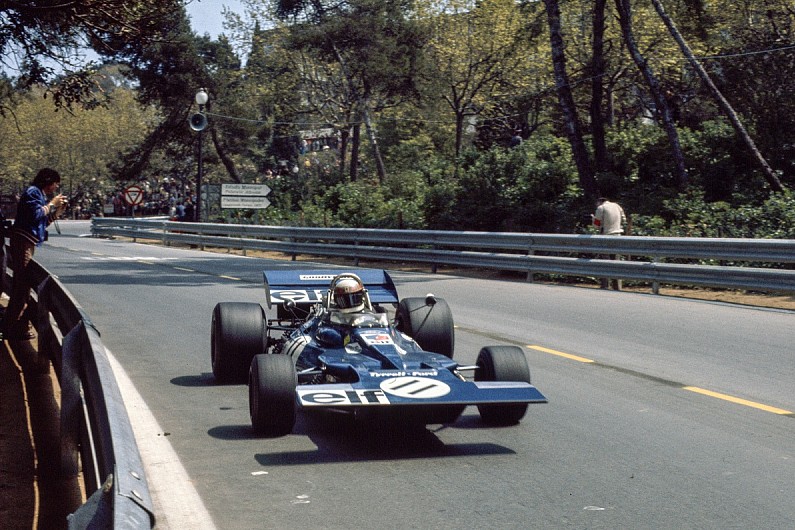 Montjuic Park, Barcelona is the scene for the first grand prix win for new constructor Tyrrell in the second round of the 1971 season.

With Stewart, the team has already claimed a world championship title: in 1969 with Matra chassis.

While struggling through 1970 as a March customer, Ken Tyrrell has designer Derek Gardner working on a new car, which appears in August.

Stewart and Tyrrell will dominate the 1971 world championship, with this Spanish GP success the first of six victories that year.

The race is also the first to be won by a car on slick tyres, Goodyear customer Tyrrell beating the Firestone teams. 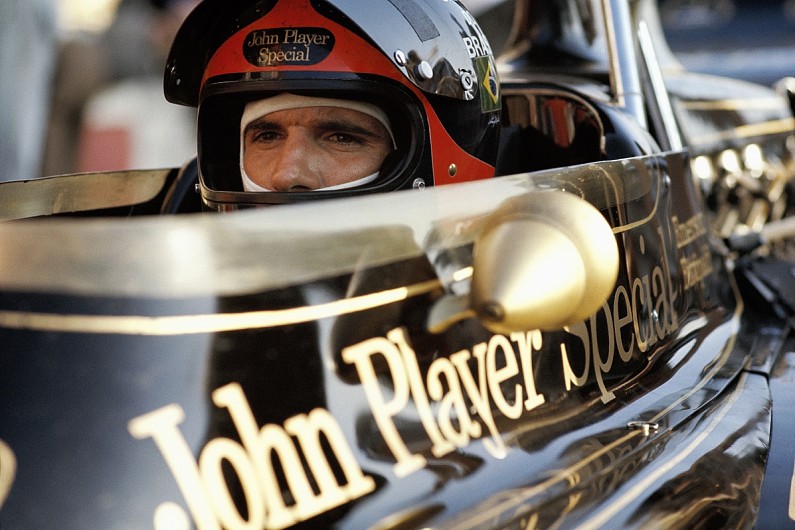 Emerson Fittipaldi is pictured aboard his Lotus 72 at Monza, scene of the Italian Grand Prix where he will wrap up the 1972 world championship.

At the age of 25, he becomes the youngest man ever to claim the title - a record that will stand until Fernando Alonso's 2005 success.

It has been a meteoric career for Fittipaldi, who only three years earlier has arrived in the UK, blazing a trail as the first significant talent from Brazil to make his name in Europe. He certainly won't be the last...

After a strong start to his title defence in 1973 tailed off and he finished runner-up to Stewart, he switches to McLaren for 1974 and becomes champion for a second time, beating Ferrari's Clay Regazzoni by three points.

PLUS: Fittipaldi's prophetic title that justified his McLaren switch 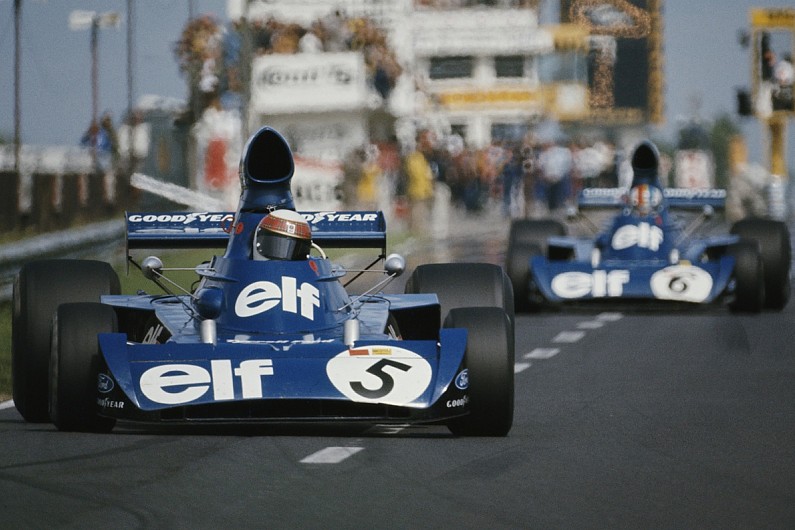 One of the all-time greats leads his understudy en route to his final F1 win.

Stewart's triumph in the 1973 German Grand Prix will be the 27th and last of his extraordinary career, setting a wins record that is not beaten until 1987, by Alain Prost.

The Scot is followed by Tyrrell team-mate Francois Cevert, who has been in the vanguard of the new wave of Elf-backed French talent - which will include Prost - and is a protege of Stewart.

A third title goes Stewart's way, but his plan to retire after the season-closing United States GP turns to tragedy when Cevert is killed in a practice crash. Stewart elects not to start his 100th world championship race. 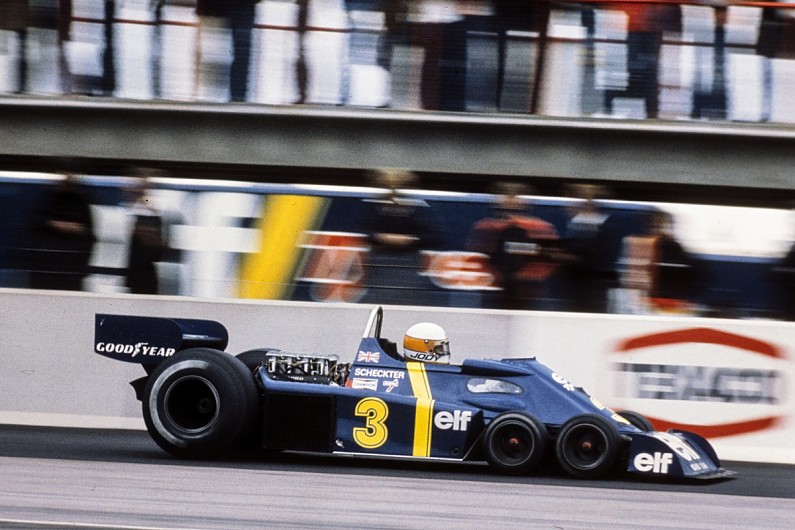 That's thanks to the outlandish Tyrrell P34, which has made its debut in that year's Spanish GP in the hands of Patrick Depailler, who has a reputation for being a strong test driver.

But it's Jody Scheckter - always less enthusiastic about bizarre concepts than the Frenchman - who gives the car its first (and only) victory in the following month's Swedish Grand Prix at Anderstorp.

In a repeat of the 1974 result, the South African is shown here on his way to leading home Depailler for Tyrrell's last 1-2 finish. 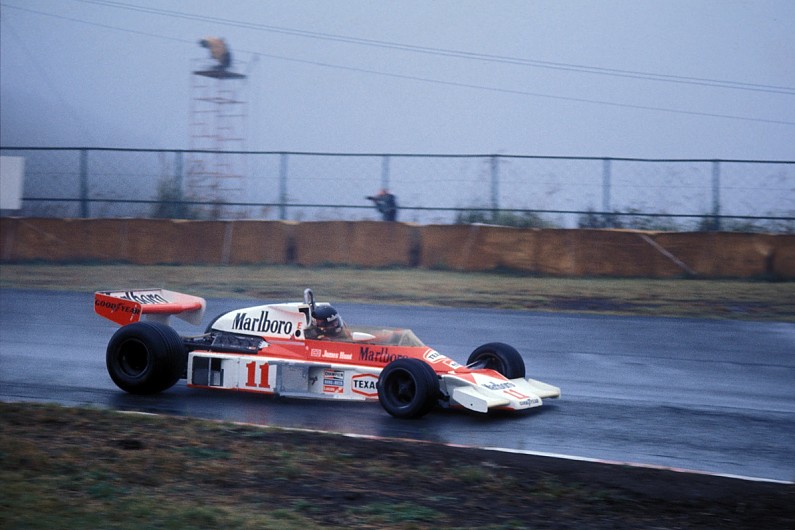 Hunt and McLaren have been the form combination since the long, hot summer, while early-season pacesetter Lauda's awful German GP accident has left him unable to defend his advantage.

The race starts in torrential rain, and Lauda decides that conditions are too dangerous and pulls out.

Hunt needs fourth place to become champion, and leads most of the race, but a puncture forces him into the pits. He rejoins in fifth, but recovers to a title-winning third. 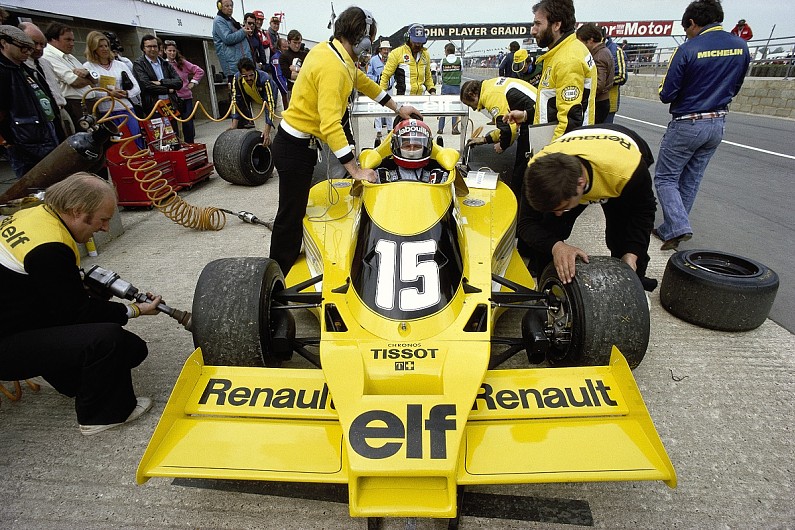 Turbocharging - and Michelin radial tyres - arrive in F1 with the Renault RS01, in the 1977 British Grand Prix at Silverstone.

Jean-Pierre Jabouille has claimed the 1976 European Formula 2 title under the Renault umbrella, and the ambitious project - alongside an attack on world sportscar competition - has been taking shape for some time.

Against the 3.0-litre atmospheric cars, the 1500cc Renault makes the grid at Silverstone but doesn't last long in the race.

But two years later, Jabouille and Renault take their first F1 win in the 1979 French GP, and the days of the atmo cars are numbered. 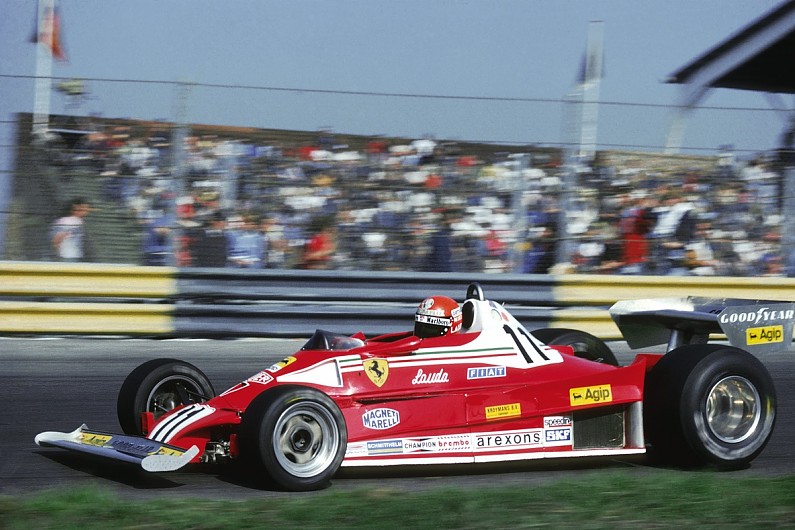 Lauda in a Ferrari is surely one of the totems of 1970s F1 history. The great Austrian here enters the Hugenholtzbocht at Zandvoort in the 1977 Dutch Grand Prix, where he scores the last of the three wins that form the bedrock for his second world championship title.

His first crown has come two years earlier in 1975, and in 1976 he seems on course for back-to-back honours before his dreadful accident in the German Grand Prix.

Astonishingly, he returns to competition just six weeks later, and will always carry the scars of the burns from his Nurburgring fire.

PLUS: The heroism, horror and hurt of Lauda at Ferrari 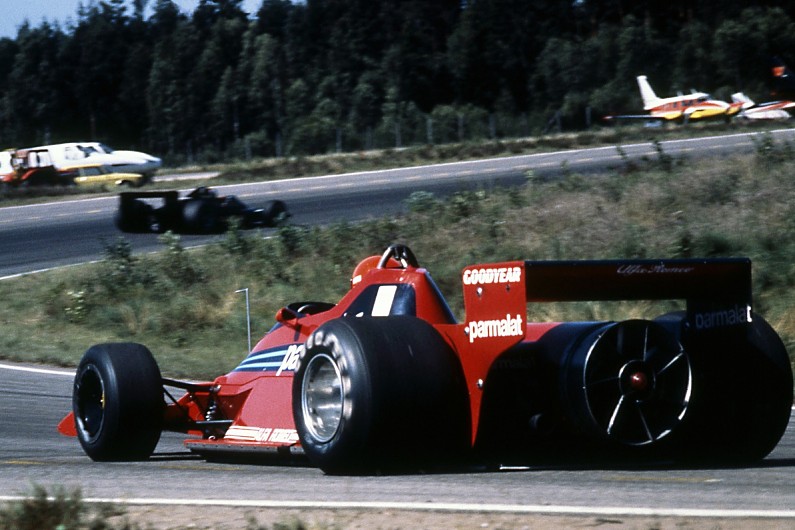 Using a fan at the back of the car to suck it onto the road and increase cornering speed is not a new concept in motorsport: Chaparral has already tried it in Can-Am almost a decade earlier.

But controversy strikes when the Brabham team unloads its cars for the 1978 Swedish Grand Prix. Around the long, medium-speed corners of Anderstorp the BT46B is in its element, and Lauda takes victory.

Team boss Bernie Ecclestone then abandons the fan car - his eye is on a bigger prize: running F1 itself. The win is also engine supplier Alfa Romeo's first in the world championship since the 1951 Spanish GP. 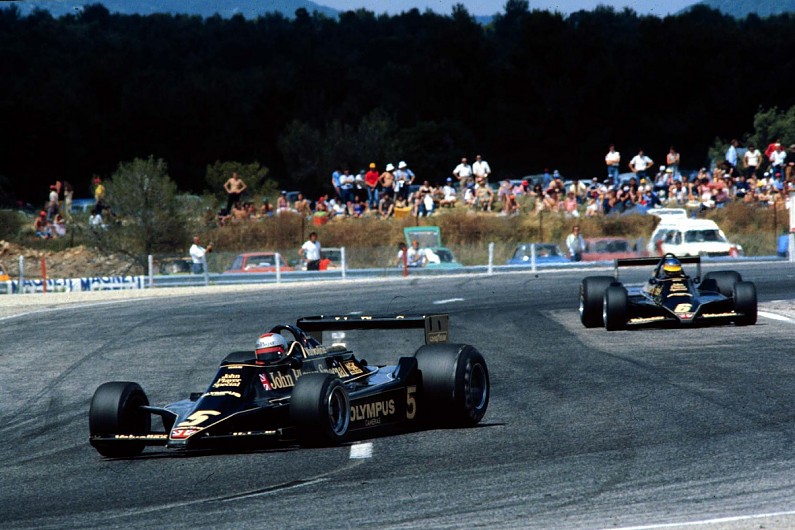 Black-and-gold beauties. Mario Andretti leads Ronnie Peterson to another 1978 Lotus 1-2, in this case in the French Grand Prix at Paul Ricard.

Andretti has been putting in the hard yards for Lotus since early 1976 - his return to the team with which he had qualified on pole for his first Grand Prix at Watkins Glen in 1968 ironically being facilitated by the departure of Peterson to March.

So, with the Lotus 79 dominant, it's entirely correct that he should be the team's focus for the title, with Peterson (back on board for 1978 after a season at Tyrrell) playing back-up.

Andretti will clinch the championship at Monza, but in tragic circumstances, as Peterson dies from injuries sustained in the race. 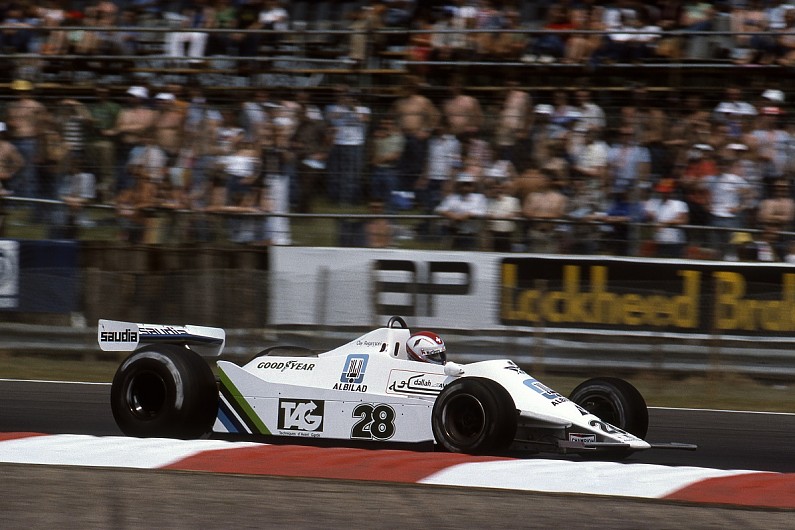 The team of Frank Williams has spent much of the 1970s propping up the F1 grid. After a disastrous 1976, he forms Williams Grand Prix Engineering and, with young designer Patrick Head and underrated Australian talent Alan Jones, the team's FW06 looks promising in 1978.

Head's interpretation of ground-effect technology results in the FW07, and suddenly, from mid-season 1979 onwards, Williams becomes the team to beat.

Regazzoni is shown here taking the squad's first win, in the British Grand Prix, before Jones wins the next three races on the trot.