Continuing the series celebrating 70 years of Formula 1, Autosport picks out the 12 moments that defined the 1980s, with the help of the extensive Motorsport Images archive

It's onto the era of big hair and turbos as we continue our look through the defining moments of Formula 1 history with the Motorsport Images archive.

The 1980s began with Williams dominating, then McLaren took over the mantle, before Williams grabbed it back and McLaren ended the decade on top again. It also featured purple patches for Brabham, with Nelson Piquet taking two titles, and Lotus, with which Ayrton Senna arrived as a grand prix winner for the first time.

It was a typically tumultuous era for Ferrari, as Gilles Villeneuve was killed and Didier Pironi was seriously injured in 1982.

All this against a backdrop of turbulence off the circuit, with two races losing world championship status amid the FISA-FOCA war, a drivers' strike in '82, a ban on ground-effect, a mandating of turbo engines for '86, and then an almost immediate unmandating of them the following year, followed swiftly by a banning of them before the decade was out... 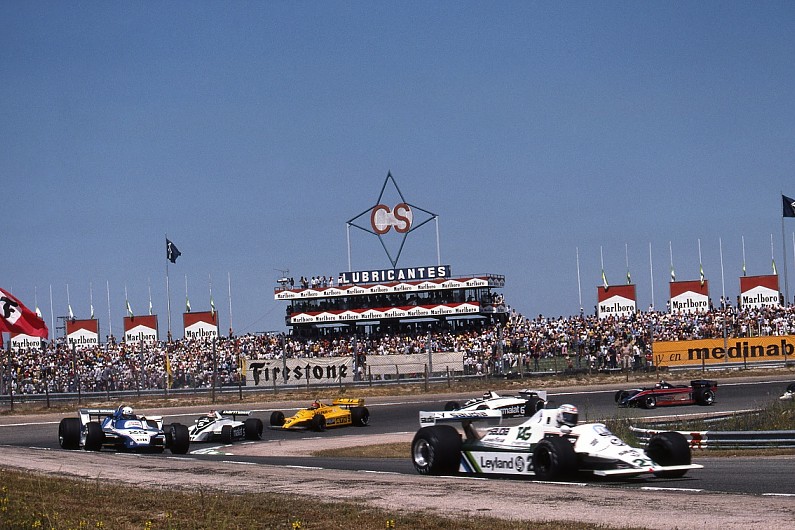 This is the period of war between governing body FISA and the Bernie Ecclestone-led constructors' body FOCA. A rumble over boycotts of drivers' briefings at preceding races escalates and, in a dispute that reaches as far as King Juan Carlos, the race goes ahead without the FISA teams or official sanction. Jones wins, but gets no points.

The 1981 South African Grand Prix - the first round of what is intended to be a breakaway series and coincidentally also won by Jones - will be the other race from this era expunged from the records. 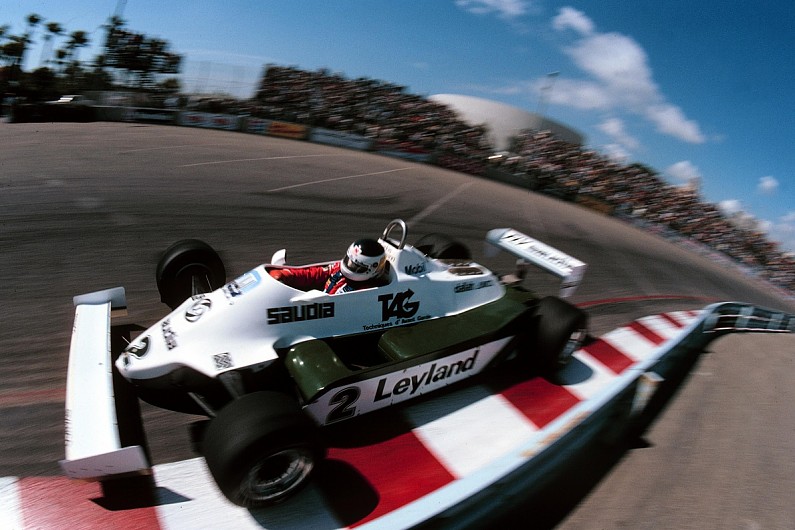 Carlos Reutemann on the limit in what, therefore, is most likely qualifying for the 1981 Las Vegas Grand Prix. The Argentinian has been one of the F1 elite for the past decade, but has never been crowned champion.

With Williams, it seems that '81 is going to at last be his year, and with six of the 15 races remaining he leads Brabham's Nelson Piquet with 43 points to 26. Remarkably, Reutemann will score just six points from the remaining seven races.

He qualifies on pole in Vegas, but a mystifying race performance leaves him eighth at the flag, and Piquet's fifth place is enough to leapfrog him for honours. Reutemann retires after the first two races of 1982. 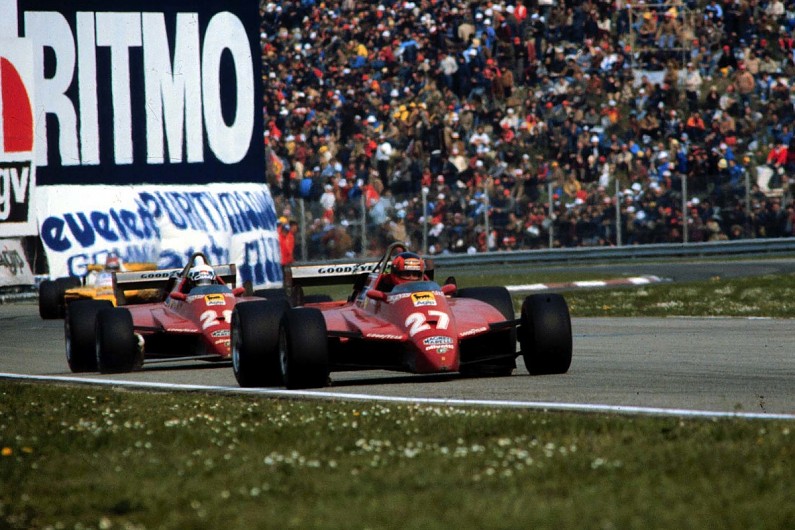 Villeneuve's last race. The 1982 San Marino Grand Prix at Imola, boycotted by the predominantly British-based 'FOCA' teams, boils down to an internecine Ferrari 'battle' after the retirement of the Renaults, the only realistic opposition.

Villeneuve, leading here, believes he's putting on a show for the crowd with team-mate Pironi, but the Frenchman has other ideas and steals victory. Villeneuve dies two weeks later as a result of a qualifying crash at Zolder, while Pironi's career ends months later when he suffers dreadful leg injuries in a practice accident at Hockenheim.

Either arguably should have won the title, with Ferrari at last producing a chassis that isn't one of the worst on the grid.

PLUS: The tragedy of Ferrari's most unpopular star 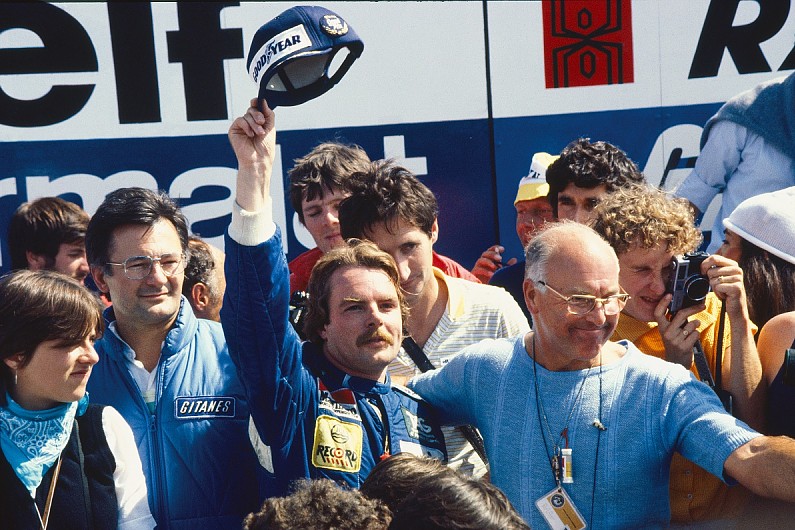 It will be the Finn's only win of the season for Williams, and comes after he passes Alain Prost's Renault on the penultimate lap, but that solitary success will be enough to give him the crown.

It's the most wide-open season in F1 history. Rosberg's triumph at Dijon makes him the 10th driver to score a win out of 14 races, and in the Las Vegas finale Tyrrell's Michele Alboreto will make it 11 out of 16.

PLUS: The "cheapest" world champion opens up 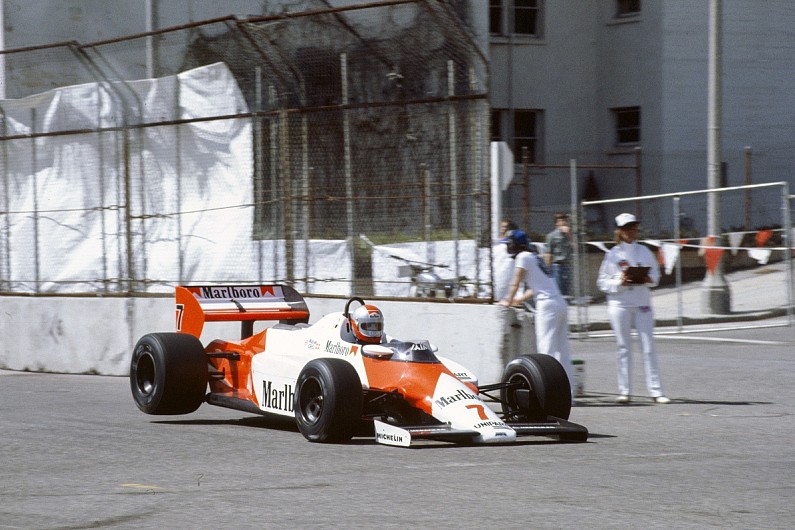 And they were complaining about the bumps at Austin... Back in a previous millennium, John Watson ramps his McLaren on the streets of Long Beach, where in 1983 he will take the fifth and final victory of his grand prix career.

The win sets a record that still stands - and likely will in perpetuity: Watson's victory comes from 22nd on the grid, the lowest starting position an F1 driver has ever won from.

What's more, team-mate Niki Lauda races from 23rd to second. This is the second race of a new F1 era, with ground-effect banned and flat bottoms mandatory. 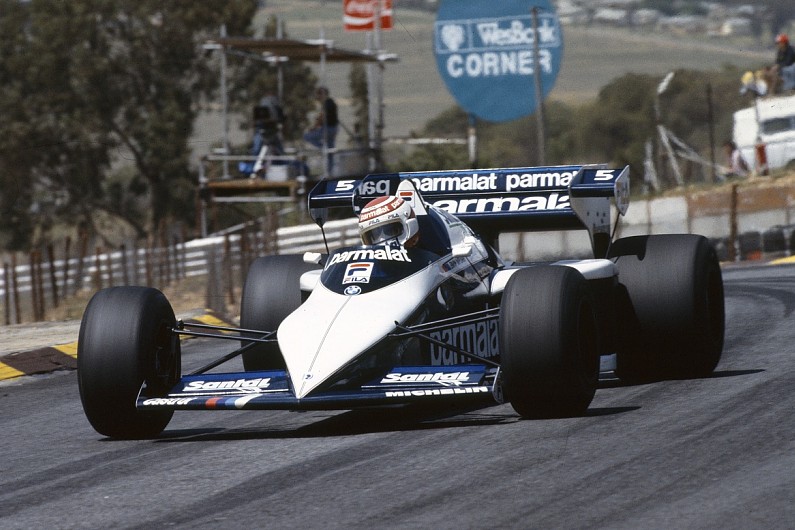 A stunning image of the beautiful, dart-like Brabham BT52B as Piquet zeroes in on the 1983 world championship title in the South African Grand Prix at Kyalami.

The Brazilian, for whom this is the second crown, becomes the first to take the sport's ultimate honour using turbocharged engines, thanks to the brute power of the four-cylinder BMW nestling in the back of the BT52B.

Piquet's late-season run snatches the title away from Prost and Renault, and he can even afford to back off to finish third, allowing team-mate Riccardo Patrese to win the race.

PLUS: The car that revived Brabham as an F1 force 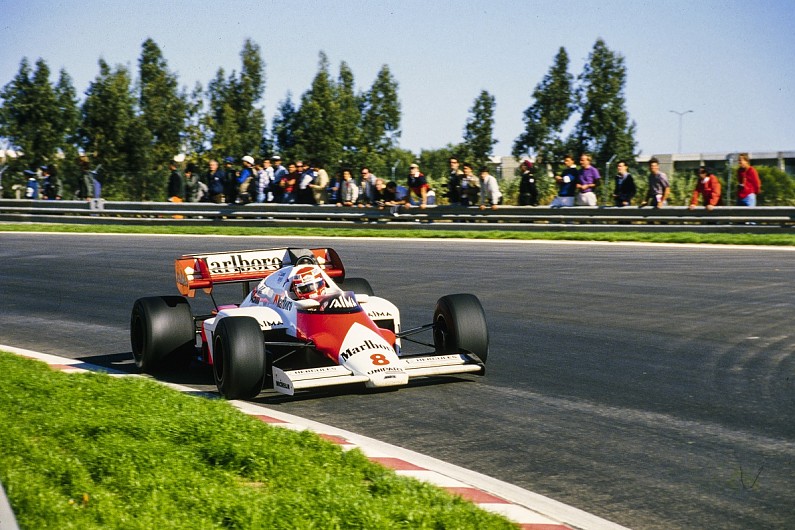 The beautiful Portuguese autumn sunlight, and precision driving from the brilliant Niki Lauda. It's the closest world championship-winning margin of all time, with Lauda - who has only come out of retirement in 1982 - defeating McLaren-TAG/Porsche team-mate Prost to the 1984 crown by a mere half a point.

If only the Monaco Grand Prix hadn't been halted early with Prost in front, and half-points awarded...

Lauda qualifies down in 11th for the finale at Estoril - typically working on race set-up rather than outright pace - but second place behind Prost in the race is enough for his third crown. 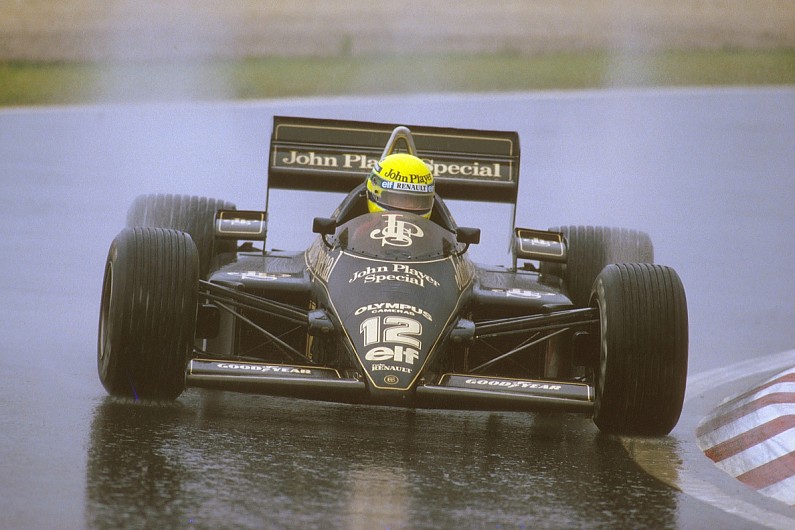 A motorsport hero arrives. Ayrton Senna's first Formula 1 victory, in the torrentially wet 1985 Portuguese Grand Prix at Estoril, is frequently upheld as the greatest of his 41 successes.

In a race where the great Prost spins out on the pit straight, the Brazilian totally destroys the opposition in his Lotus-Renault, winning by over a minute. In truth, his moment of arrival has arguably already come in similar conditions the previous year in Monaco with Toleman but, in contrast to that race, the Estoril event lasts for two hours.

PLUS: The Senna victory that outclassed Donington 1993 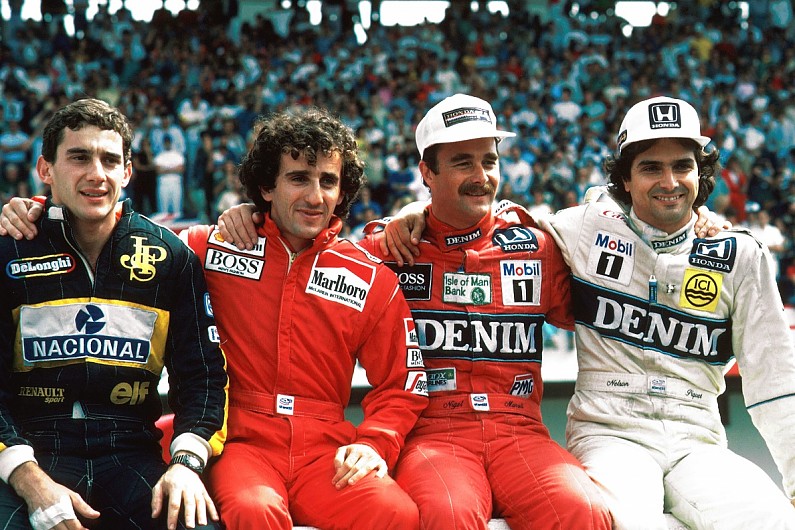 All friends? If they are now, they won't be for long... It's one of the most famous images of the 1980s; four greats - Senna, Prost, Nigel Mansell and Piquet - sitting on the pitwall at Estoril in September 1986.

At that point, with three races remaining, this quartet are all in contention for the title. But Mansell's win that weekend and Senna's fourth place will knock the Lotus driver out of the equation.

The remaining trio will enter the finale in Adelaide vying for the crown, and it will be one of the most dramatic F1 deciders ever... 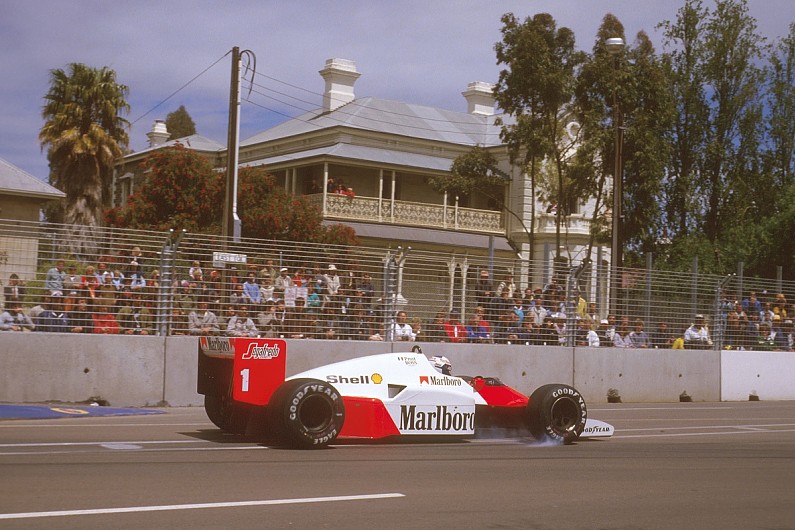 The championship winner no one expected... Already champion in 1985, Prost and the McLaren team's TAG-badged Porsche engines are outpaced throughout much of the 1986 season by the Williams-Hondas of Mansell and Piquet.

But the Williams duo spend too much time taking points from each other, giving Prost an outside sniff of honours entering the finale: the Australian Grand Prix at Adelaide. The title seems to be going Mansell's way when a spectacular tyre blowout puts him out, and prompts Williams to bring Piquet in for a precautionary pitstop.

The great Prost moves in front to win, and become champion for a second time. 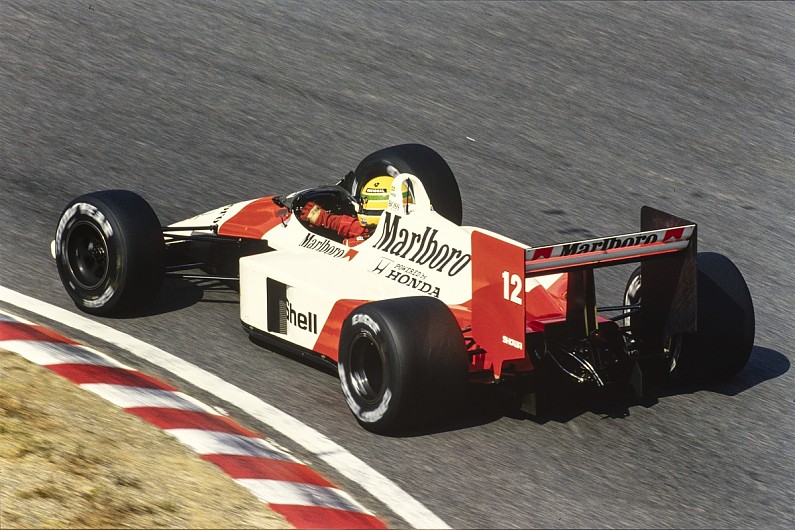 Another one of Senna's greatest drives, in this case it rewards him with his first world championship title. Arriving at McLaren for 1988 along with Honda power, he joins Alain Prost in what will be an all-conquering line-up: they win 15 of that year's 16 grands prix.

The penultimate round, the Japanese Grand Prix at Suzuka, will crown Senna as long as he beats Prost, but he stalls at the start and drops to 14th. Senna carves his way up to second and, as rain begins to fall, he passes Prost at mid-distance.

Curiously, he is champion despite scoring fewer points than Prost - only the best 11 scores of 16 count, meaning Prost has to discard three second places from his tally. 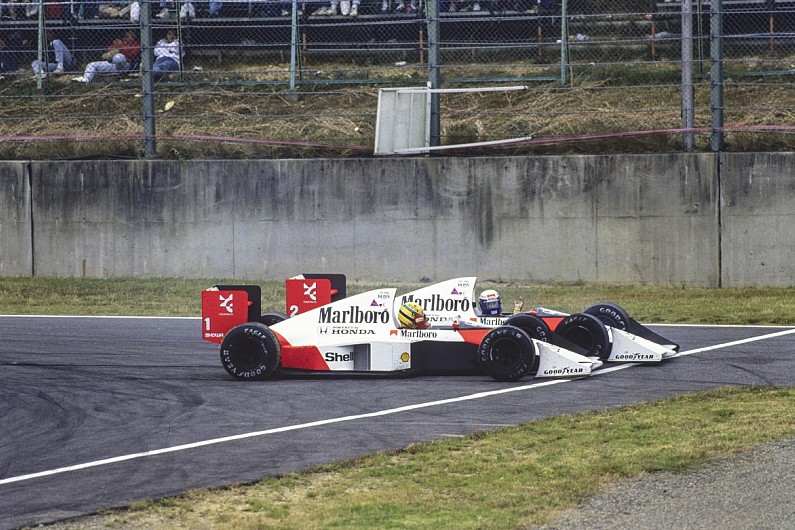 The first of two successive world championships to be decided by a 'professional foul'. Prost and Senna are now at loggerheads at McLaren.

When Senna attempts to pass Prost with six laps remaining in the 1989 Japanese Grand Prix at Suzuka for a win that will keep him in contention going into the final round in Adelaide, Prost turns in on him and the two McLarens slew to an interlocked halt.

Senna gets going again and repasses the Benetton of Alessandro Nannini to win, but is excluded for missing the chicane by driving down the escape road while disentangling his car from that of Prost, who is crowned champion for a third time.