Alonso: top Formula 1 teams still in 'another league' from McLaren

McLaren's Fernando Alonso admits the top Formula 1 teams are still in "another league" from McLaren, despite producing his best qualifying of the 2018 season for the Spanish Grand Prix

McLaren has introduced what it labelled its "real" 2018 F1 car for Barcelona, with several upgrades that Alonso praised after Friday practice.

The Spaniard made it into Q3 for the first time this year, qualifying eighth, albeit over 1.5 seconds off the pace of polesitter Lewis Hamilton.

Alonso admitted the result left him with mixed feelings, happy that McLaren has taken a step forward but aware that the gap to the front is still significant.

"We had been P13 three times in a row and today we took that step forward we needed," Alonso told Sky Sports F1.

"Probably the downside of this position is still the gap, with the top six, they are in another league. And we need to keep chasing and closing that gap race after race.

"At least the positive note is that everything we brought for the car works as expected. Now we need to bring more things as quickly as possible."

Alonso reiterated his view that the car he is racing this weekend should have been available for the start of the season in Australia.

"This package is making me happy. In another way, this car, is supposed to be the Australian Grand Prix package," he added.

"We saved them with a lot of points on Sundays with a little bit of luck and good races, but now we need to push the development and we need to bring new parts every single race." 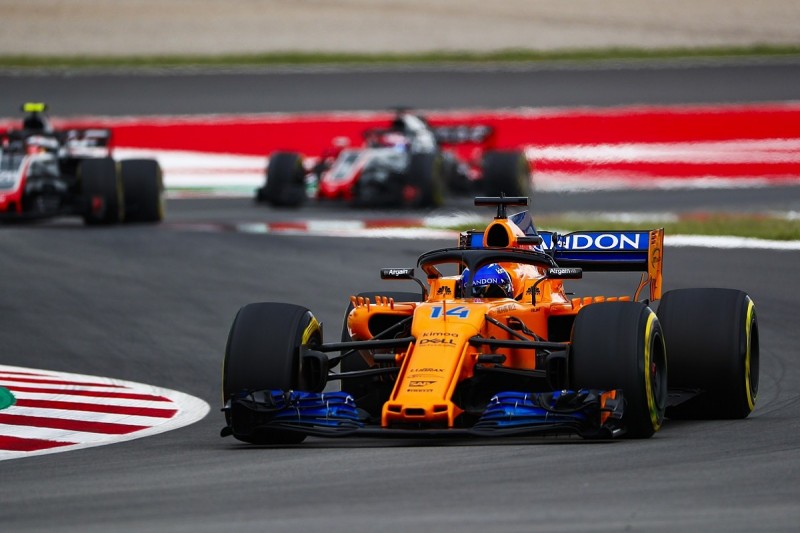 Alonso is the only driver in the top 10 who will start with supersoft tyres, having set his fastest time in Q2 with them. His closest rivals will all start on softs.

The red-walled supersofts have been regarded as the weakest tyres so far this weekend, but the McLaren driver is hopeful the expected rain will make Saturday's tyre selections irrelevant.

"The mediums work well and the yellow ones too, maybe better than the reds, and I think tomorrow they will be everybody's favourite," Alonso said.

"I have to start with the reds because I did Q2 with the reds, but if it rains tomorrow we'll all start with intermediates or wets and everything that happened today doesn't count much."

Formula 1: Spanish GP practice crash one of my biggest - Hartley