The two-time F1 world champion is expected to drive the current car in what will be classed as a promotional or filming day, with 100kms of running allowed.

The team has not yet officially confirmed his Barcelona outing, but in PR terms its timing - immediately after Daniel Ricciardo logged the first podium of the hybrid era for the team in the Eifel Grand Prix at the Nurburgring - could hardly be better.

Asked after the Eifel GP if the test was happening team boss Cyril Abiteboul said: "I'm sorry, I can't confirm or deny it."

A spokesperson for the Barcelona circuit told Autosport: "On Tuesday we have activity on the track and our client is confidential."

It's not known whether the team will also take an older 2018 F1 car model, which will not be subject to any mileage restrictions, following the strategy used by AlphaTauri at Imola earlier this year.

Renault has such a car ready to go, as it ran Daniel Ricciardo and Esteban Ocon in a two-day test in Austria before the start of the season.

Although he wouldn't confirm the test, Abiteboul said that Alonso has been following the progress of the team closely, and sent messages during the Nurburgring weekend, suggesting it was a sign of the Spaniard's commitment to the project. 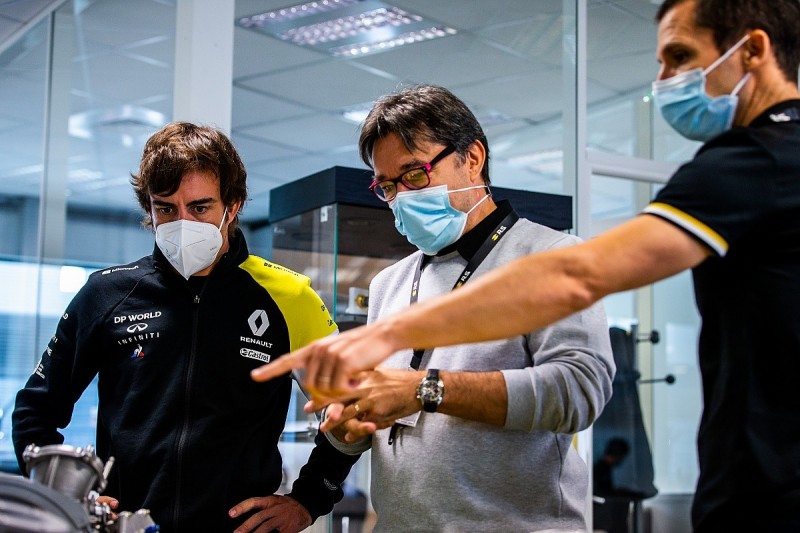 Alonso has been getting up to speed in recent weeks by spending time at the Renault factory in Enstone and working with the engineers.

"We received a message before, during and after the race," said Abiteboul. "You would be impressed to measure his level of interest. And I think that when he initially joined the team, and in his communication when we announced him, it was very much about 2022.