Toto Wolff says he "enjoyed" the fight between Mercedes drivers Valtteri Bottas and Lewis Hamilton at the start of the Eifel Grand Prix, and had no concerns about contact

Hamilton was able to briefly take the lead of the race from poleman Bottas after making a better start off the line, lunging up the inside at Turn 1 at the Nurburgring.

Hamilton ran a bit wide at the corner, forcing Bottas off-track briefly, but the Finn was able to lunge back ahead after running across the kerb when rejoining the track and getting the inside line for Turn 2.

Hamilton said after the race that he was impressed by Bottas' move during their early fight, praising his team-mate for doing an "amazing" job.

"I remember coming out of that corner thinking, 'good on you man. I'm impressed, that was good'," Hamilton said.

Asked by Autosport for his thoughts when seeing his drivers run so closely together in their battle, Mercedes F1 chief Wolff echoed Hamilton's praise for Bottas.

"I enjoyed the racing between the two of them, because I have never doubted that there would be any contact," Wolff said.

"These guys respect each other. They know very well what the boundaries within this team are.

"Lewis had braked a little bit late and had full lock, and that obviously pushed Valtteri wide, but Valtteri in his true style as a rally driver kept the foot down and deserved the position. I enjoyed that." 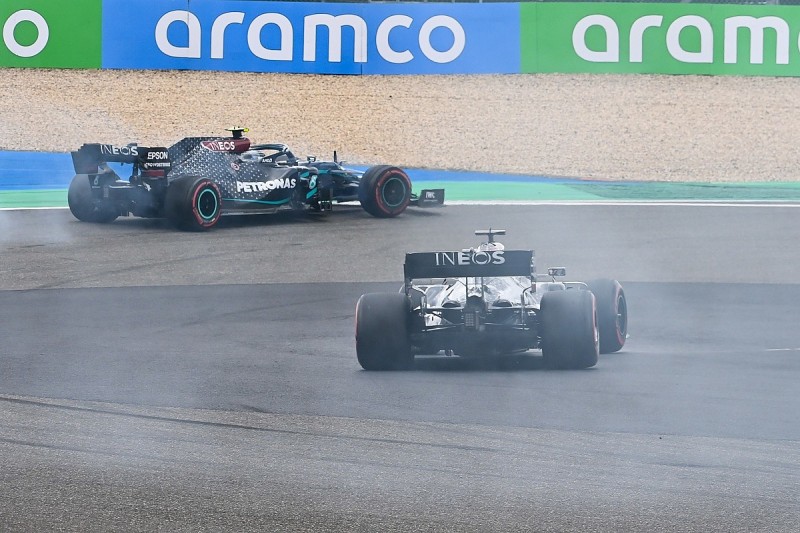 Bottas held the lead of the race until lap 13, when a lock-up allowed Hamilton to move ahead, and ultimately retired shortly after his first pit stop due to a suspected MGU-H issue.

"I think Lewis had the first jump from the start, a bit of a better getaway, so that allowed him to get to the inside of Turn 1," said Bottas, who called the fight with Hamilton "good fun".

"I knew that the best thing for me would be to brake as late as I can and still try and stay on-track. I think he braked really late and then understeered wide.

"I wasn't going to give that position up easy, so I decided to go for it from outside. I'm glad I did get the position back for the second turn inside."